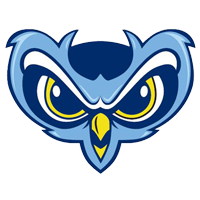 LARGO – The Prince George’s Community College (PGCC) men’s basketball hit the hardwood at Novak Field House for the final time of the 2019-2020 season on Sunday afternoon to take on Allegany College of Maryland.

For seven of the Owls players, it marked the final time they would play inside the gym as each sophomore was recognized at halftime for their contributions to Prince George’s Community College. In a physical contest, the game came down to the wire but it was the Owls who ultimately prevailed, earning a hard fought 77-73 victory over the conference opponent. The win lifted the Owls to 15-7 overall, including 5-6 in Maryland JUCO play.

After a slow first ten minutes, the Owls exploded for a 10-0 run to take a commanding 27-8 lead with seven minutes left in the first half. Prince George’s defensive curtain began to falter as the first half came to a close.

However, as Allegany climbed back to within reach of the Owls as the Largo program went into the break with a 36-26 lead. A halftime announcement was then made recognizing the seven sophomores who were playing in their final home game which included a moment for the friends and family of each player for all of their time and sacrifices made over the years to support their student-athlete. One of the sophomores, Isaiah Miles, led all scorers at the break with 10 points and 7 rebounds. Fellow sophomore Tunde Scrivner wasn’t far behind with 9 points and 5 rebounds.

The Owls continued to score in the second half as they were able to keep themselves distanced from the Trojans attack until Allegany climbed back to come to within four points (52-48) of the Owls with ten and a half minutes remaining.

Sensing a shift in the momentum, Owls head coach William “Butch” West made some adjustments during a stoppage in play which resulted in Prince George’s increasing their lead to double digits once again as the Owls went up 73-60 with under five minutes to play. The Owls survived a near-collapse over the game’s final minutes as Allegany outscored PG 13-4 to nearly upend the home team in a matchup that came down to the final few possessions. Prince George’s was able to hold off the Trojans just enough to earn the 77-73 victory in a meaningful game at home.

The Owls finished the year with an impressive 7-3 homecourt record which has been supported by the NJCAA’s Division III Men’s Basketball second highest home attendance average throughout the season.

In a game dedicated to the second-year players, it was sophomores Scrivner (20 pts, 11 rebs) and Miles (13 pts, 12 rebs) who recorded double-doubles in the win. Scrivner (977 total career points scored) has been a scoring machine all season and will look to join the 1,000 point club in the Owls next matchup on the road against Chesapeake College on Wednesday evening, Feb. 12.