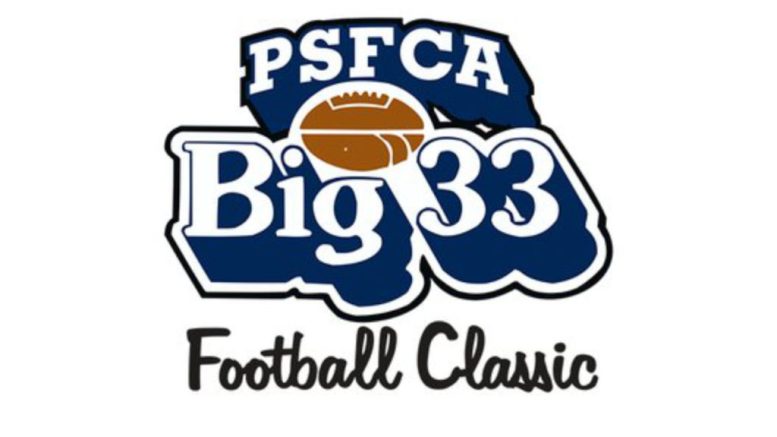 East vs. West Game to Move to Memorial Day weekend

“It’s rewarding to see generations of fans energized by one of our country’s favorite sports and traditions. We are extremely proud to showcase this premier high school football game featuring gifted student athletes and leaders, in partnership with the Dauphin County Commissioners,” said Garry Cathell, executive director of PSFCA.  “Part of this special Big 33 experience involves teaming our players and cheerleaders with their special needs buddies, as well as giving back additionally through community visits like the Lebanon VA Medical Center and through meeting Gold Star families, new this year.”

“Today is an exciting day as we announce our extremely talented roster of PA all stars who will hit the field for one of the greatest high school football games in the country. As coaches and fans, we always look forward to an exciting match up that boasts so many football greats since 1957,” added PSFCA President Coach Mike Whitehead. “We are extremely grateful to the Commissioners, our honorary chair Coy Wire, our host families, players, sponsors, buddies, cheerleaders, fans and volunteers for supporting the success of one of the country’s top high school competitions as we celebrate Memorial Day weekend and our military.”

Since the PSFCA took over the Big 33 Football Classic in early 2017, the commissioners have provided vital support annually in tourism grant funding, which is generated by hotel room taxes, to ensure the game would continue in Dauphin County.

“Dauphin County is proud to host the annual Big 33 Football Classic and support its mission to showcase top young talent from Pennsylvania,” said Dauphin County Board Chairman Jeff Haste. “It’s our equivalent to the Super Bowl in many ways, bringing hundreds of players and their families, cheerleaders, coaches and buddies to the region and generating more than $2.7 million in economic impact every year.”

“We’re thrilled to support the Big 33 and want to thank the PSFCA and Central Dauphin School District for taking the ball and running with it the past several years, keeping this proud tradition going,” said Dauphin County Commissioner Mike Pries. “It gives young people the opportunity of a lifetime – to play or cheer in the biggest football game of their young career.”

“We’ve worked hard over the years to make it much more than a game, including a free first-down clinic for kids, the Buddy program, and the partnership with The Peyton Walker Foundation to encourage athletes to get heart screenings,” said Dauphin County Commissioner George P. Hartwick, III. “Having the Big 33 back in the Harrisburg area every year is a huge win, bringing honor, recognition and an infusion of activity into the local economy.”

The game and other events surrounding Big 33 support the Buddy Program, which connects kids with special needs with all-star athletes in football, cheerleading and beyond.

Again this year, Big 33 will partner with Julie Walker and The Peyton Walker Foundation, who applauded the Big 33 for their leadership in making players’ heart safety a priority. Walker said, “We are grateful to partner with PSFCA, Big 33, Mid Penn Bank and UPMC Pinnacle Sports Cardiology to provide heart screenings for all Pennsylvania players this year. UPMC Pinnacle Sports Cardiology is pleased to be the medical partner for the Team Heart Screenings and provide an Electrocardiogram, a murmur check and an Echocardiogram.”

Walker is a nationally recognized heart hero, working to prevent Sudden Cardiac Arrest in students, and pointed out that conditions that can cause SCA are often detectable and treatable. Yet, SCA is the number-one killer of student athletes in the country. The Foundation provides free routine heart screenings that help to identify potential heart issues that can lead to Sudden Cardiac Arrest. Mid Penn Bank is sponsoring the Big 33 screenings. Walker added, “Thank you for being Heart Heroes.  Saving other families from losing a child to SCA is our end goal.”

2020 Honorary Chair Coy Wire joined via video. Wire is a former professional football player who joined CNN Sports in 2015 as an anchor and correspondent.  He anchors daily Bleacher Report segments, covers events and serves as an expert contributor across all platforms. He appears regularly on CNN programs Early Start, New Day and CNN Newsroom, in addition to HLN’s Morning Express with Robin Meade and Weekend Express with Lynn Smith and contributes to many other CNN programs such as covering Super Bowls, Olympics, FIFA Women’s World Cup and beyond. A Stanford University star, Wire was the first player in modern school history to lead the team in rushing one year and tackles in another. He was drafted into the NFL by the Buffalo Bills in 2002. He was named team captain for both the Bills and the Atlanta Falcons during his career which spanned nine years. He also received the Ed Block Courage Award, the Walter Payton Man of the Year Award, and Special Teams Player of the year. Coy, who grew up near Harrisburg, attending Cedar Cliff High School, and is a proud Big 33 alum, wrote an inspirational book, “Change Your Mind.”

Wire noted, “I, too, was fortunate enough to play in the Big 33. I represented Team Pennsylvania. It is an experience I will never forget and you, too, will soon see why. Who knows? Maybe someday you will be playing in a Super Bowl. Looking forward to seeing all of you soon.”

For tickets and more information about the game, which will kick off at 2 p.m. on Monday, Memorial Day, May 25, at Central Dauphin School District’s Landis Field and include a pre-game fan experience and community festival, go to www.big33.org.  Big 33 partners said Memorial Day is expected to be extra special offering a Pre-Game Fan Experience, including a free USA Football Youth Clinic, a cross-fitness military competition called “Murph,” named after decorated military hero and Navy Seal Michael Murphy, and capped off by the Big 33 Football Classic. Tickets for the football game are expected to go on sale April 1. For updates, follow Big 33 on Facebook @Big33FootballClassic, Instagram @PSFCABig33Football Classic or on Twitter @PSFCABig33.