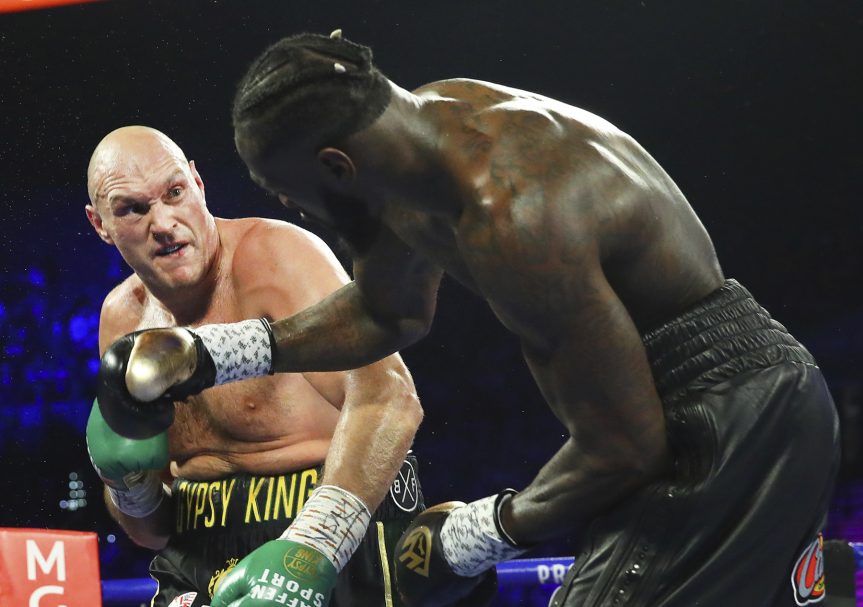 Fury, 31, dominated Wilder for seven rounds until referee Kenny Bayless stopped the fight at the 1:39 mark of 7th round to give Fury a TKO victory and the World Boxing Council belt to improve his record to 30-0-1. Bayless reacted to Wilder’s corner, who had also seen enough.
“I want to give a big shout out to Wilder.

He battled for seven rounds. He is a warrior, and he will be back,” Fury said. “But, I want to say that the king is back on top of the throne.”

Wilder (42-1-1), who was defending his title for the 11th time, displayed minimal boxing skills and looked to land his wicked right hand to win the fight as he has for the majority of his career.

He tried to jab Fury in the first round, but no attempts landed, and from then on, Wilder, 34, backtracked and took some heavy blows from Fury. Fury showed no fear of Wilder’s right hand as he jabbed and hooked blows to Wilder’s body and head.

Wilder’s face was battered, and his right ear was cut. The first knockdown in third round by way of a clean blow directly to Wilder’s ear and blood began to flow. The second knockdown in the fifth round came from a hard, left hook to the body. It was hard to have given Wilder any rounds on the judges scorecards.

Wilder’s right hand is his signature weapon, but it is hard to throw that punch when he was backpedaling all night. He was on the ropes, with weak legs from the second round on. Bayless and Wilder’s corner kept a close eye on Deontay as his face looked bloody and swollen.

After a barrage of punches in the corner in the seventh round, Bayless had seen enough and called the fight off.

Fury, known as the “Gypsy King”, had the look of confidence after coming into the ring on a throne. His boxing skills were too much for Wilder in this fight.

Wilder’s corner, including former champion Mark Breland, did not want to see their fighter taking the kind of blows Fury was landing.

“I wanted to go out on my shield,” Wilder said. “I am sorry my corner threw in the towel. I am a warrior and I wanted to go on.” Wilder did not go into details but indicated that his legs were shaky coming into the fight. He said he had other issues coming into the contest. “But it is what it is, and I make no excuses.”

His issues seem to be a lack of real boxing skills. He was 17 pounds heavier than the last fight with Fury, and he seemed to be out of gas as the fight went on.

His arms were heavy, and he was chopping downward with his right hand, which was ineffective on a fighter much taller than he was. With Fury laying his 273 pounds on Wilder, it’s no wonder he showed fatigue throughout the fight.

There is probably a rematch clause in their contract, so Wilder may get a chance to redeem himself. Some fighters can bounce back from a first loss, and some fighters can’t.