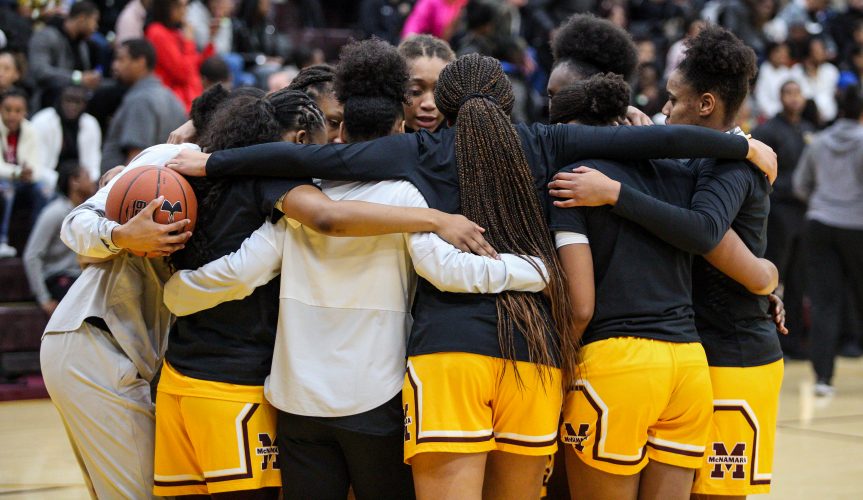 WASHINGTON – Heading into the final two minutes of the fourth quarter with a 42-41 lead, the Bishop McNamara High School girls basketball team was just moments away from defeating their St. John’s in the Washington Catholic Athletic Conference (WCAC) Basketball Championship Tournament semifinals on Sunday afternoon.

The Lady Mustangs called on their senior leaders, Liatu King and Madison Scott, to connect with the game’s final blows, and they delivered. First, Scott, a 6-foot-2 guard, slapped away a layup attempt by Caramina Tanedo to stop a possible lead change.

“One stop, that’s all we kept saying,” Scott said. “We are a defensive team, and we know defense wins championships. Once I got that block, I said ‘let’s go, we are winning this game.’

Then, as time ticked away with McNamara holding a three-point lead, King hit a fall-away jumper, causing the Bender Arena at American University to shake. As time expired, the Lady Mustangs celebrated in center court as the crowd roared with approval.

In the quest to win their first WCAC title since 2008, McNamara beat its biggest foe by shutting down standout junior Azzi Fudd and playing tough man-to-man defense.

Three players scored in double-figures as the Lady Mustangs defeated St. John’s 46-41 to earn a berth to the WCAC finals on Monday night.
Both teams entered the semifinals trading wins with each other during the regular season. The Mustangs earned a key away win on Jan. 21, 42-37, while the Lady Cadets spoiled Senior Day in Forestville with a 68 – 64 overtime victory.

However, McNamara still felt the sting of last year’s loss to St. John’s in the tournament finals last season, where Fudd scored a game-high 32 points. The pain of that defeat weighed on the veteran players, including Scott and King, who recall last year’s disappointment vividly.

“Me and Maddie had to keep our heads in the game,” King said. “Coach (Frank Oliver) said the passion you have for each other is the same passion you need to have to beat St. John’s. So, with all the anger we had, we knew we needed to close the game out.”

McNamara jumped into a 13-5 run to end the first quarter, with Scott scoring six points. Fudd scored six of St. John’s final second-quarter points before halftime to reduce their deficit to two points.

Forward Taylor Napper’s five third-quarter points, combined with Fudd’s two free throws, tied and gave the Lady Cadets their first lead of the game. However, St. John’s were unable to capitalize on opportunities to expand their small advantage thanks to the Mustangs man-to-man defense.

According to head coach Frank Oliver, the game plan to have Scott guard Fudd and trust the rest of his players to take on St. John’s shooters.
The game plan was effective as St. John’s scored more than half of their points (21) on the free-throw line and convert only one 3-pointer. While Fudd scored a team-high 14 points, most of her damage (8) was at the charity stripe.

“We were committed to our defensive plan to limit them to 10 points a quarter,” Oliver said. “We did in the first quarter and fourth quarter, and the effort was there. All their points came in the free-throw line, and we said if we keep them at the line, we would be okay.”

After a game-tying 3-pointer by Lady Mustangs point guard Yonta Vaughn (12 points), both teams traded the lead multiple times throughout the fourth quarter. King knocked down a quick layup for McNamara with 2:12 remaining to recapture their lead for good. The senior scored a game-high 16 points while Scott added 14 points in the win.

“I think we are mentally ready for this,” Oliver said. “There is something to be said about experience and having been here before. This is our third year in a row in which we will be in a semifinal or final, and we have five seniors who are bringing the young ones along…I believe in this team.”
McNamara will face Paul VI in the championship finals Monday night after the Lady Panthers defeated Bishop O’Connell, 45-29, in the tournament’s second semifinal.