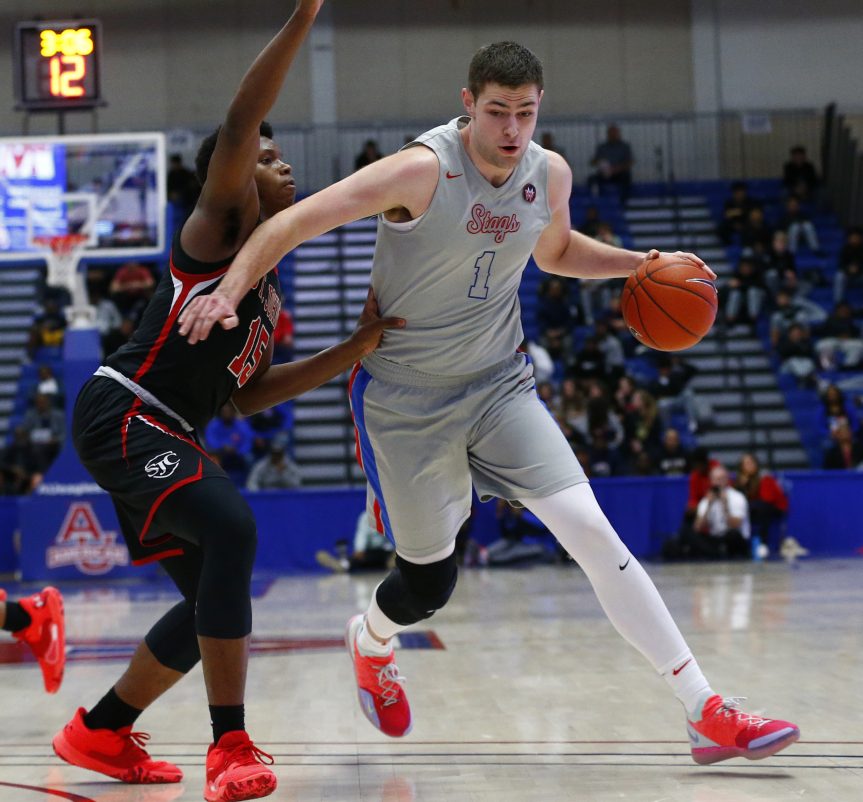 The No. 1 seeded Stags beat the No. 4 Cadets, 63-50, to take the first spot in the championship game on Feb. 24. Senior forward Earl Timberlake led DeMatha with 19 points, Hunter Dickinson contributed 17 points, and Elijah Hawkins followed up with 14 points.

The Cadets were led by senior guard Ishmael Leggett who scored a game-high 22 points, and Manzie Wilson scored 12 points.

“(I’m) very proud of our team,” Stags head coach Mike Jones said.
“It’s all about surviving and advancing; we survived today, and I’m very proud of this team.”

The Stags never trailed in their double-digit victory, leading by as many 16 points, but a win was far from guaranteed in the physical and scrappy game.

St. John’s keyed in early on Dickinson, who dominated an early-season matchup when he scored a career-high 40 points against the Cadets. Hawkins, in particular, imposed his will as a premier two-way player in the WCAC.

“I just want to have a dog mentality every time I get on the floor,” Hawkins said. “Because that’s what my team expects me to do. They expect me to step up defensively and just hit open shots when I can.”

The diminutive guard was hellacious on defense, giving Wilson or Leggett consistent trouble while making sublime decisions with the ball in transition after forcing turnovers.

The Cadets cut the deficit to just seven in the fourth quarter following a 3-pointer from senior forward John Square Jr. However, DeMatha responded with a 10-0 run, including six free throws from Hawkins to establish a 56-39 lead.

“It’s going pretty well,” Hawkins said about his first season as starting point guard of DeMatha. “I learn from the guys that were ahead of me like Jahmir (Young) and Justin (Moore), who took the role last year, and I’m just doing whatever I can to help the team win.”

The second game of the evening was a 74-63 PVI win over Gonzaga. Jeremy Roach, a senior Duke University commit guard, led the Panthers with a game-high 24 points, junior guard Trevor Keels had 18 points, and sophomore guard Dug McDaniel came up with 14 points.

Sophomore guard Devin Dinkins scored a team-high 16 points, and senior forward Terrance Williams followed up with 15 points. The PVI offense, whose identity revolves around controlling the pace and playing full-court offense, came out fast and threw the first punch with an 11-0 run and never looked back.

That was mostly due to Roach, who sat out his junior season with a torn right ACL. That restlessness of not playing an entire season contributed to Roach having a lot of pent up energy in his first game back in Bender Arena.

“We’re not losing again,” Roach said defiantly. “We’ve lost every single year, so I just told them ‘yo I just need you all for 32 minutes, we did that, we fought all the way through. I was not letting us lose.”

From whistle to whistle, the senior guard imposed his will, having little trouble getting anything he wanted throughout the night. When he wasn’t getting into the lane at will, Roach was talking trash to Dinkins or Williams while on defense, setting a rebellious tone for the night that his teammates quickly picked up, including Keels and McDaniels who gave their defenders an earful or stared them down whenever they scored.

“They came out the gate pretty fast,” Dinkins said, “Scored a lot of points, and we were able to fight back our second run just wasn’t enough to get the W. Even when Gonzaga outscored the Panthers 22-12 in the third quarter and even tied the game off a layup from senior guard Chuck Harris.

The response was Roach hitting a pull-up jumper from mid-range just before the buzzer to make it a one-possession game. That poise from their leader allowed the Panthers to reel off an 8-0 run to start the fourth quarter. Though, Gonzaga never recovered from the onslaught.

“There’s a reason why (Roach) is a McDonald’s All-American, Jordan Brand game, and he’s going to Duke,” Gonzaga head coach Steve Turner said. “I thought at times Judah Mintz did a really good job on him, and I thought there were times we lost him in transition. He’s a great playmaker, one of the best players in the area.”

Stay tuned for our coverage of the championship at Bender Arena at 8 p.m. tonight (Feb. 24).