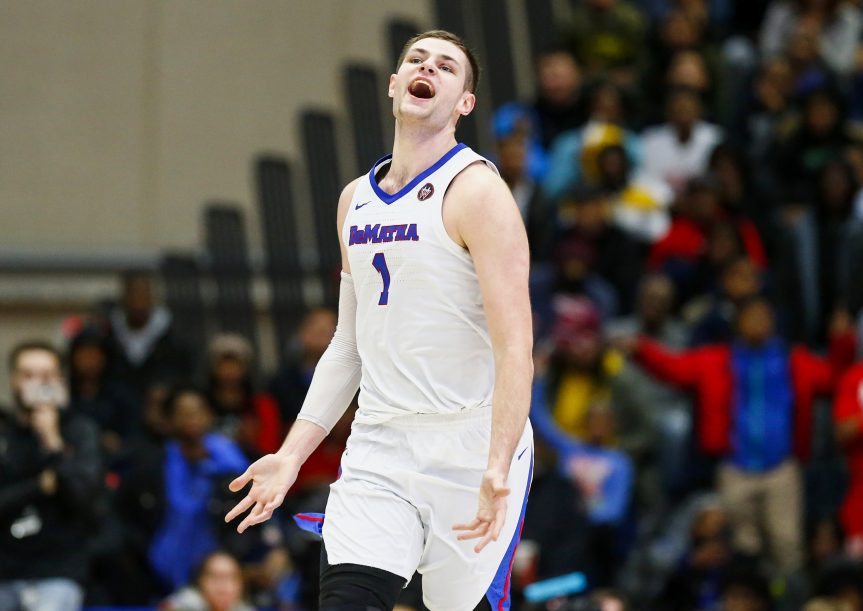 With the win, the Stags won their second title in three years and their 41st conference championship. The victory was also head coach Mike Jones’ 500th win in his 18-year career at the Hyattsville-based school.

“My other finger was kinda getting lonely over there,” senior center Hunter Dickinson said, smiling, “I needed another one.”

In front of an electric crowd at the Bender Arena, DeMatha’s senior class stole the show. With every touch of the ball and dribble down the court, Dickinson, forward Earl Timberlake, as the rest of the Stags attempted to finish every play with purpose, wearing the enthusiasm on their faces.

After the game, several players spoke about honoring the victory to Morgan Wootton, the former DeMatha head coach who died late last year.

That motivation was the perfect backdrop for a fast-paced, but physical contest against Paul VI. Dickinson was a key factor all night on both sides of the ball.

Despite just scoring 10 points, the University of Michigan commit was demonstrative in his leadership, instructing his teammates consistently on the defensive end.

Meanwhile, Timberlake focused on being an offensive machine, registering 21 points and six assists while adding eight rebounds and five blocks.

He battled with Paul VI’s Jeremy Roach all night; a challenge fans relished to see after the point guard’s 24-point performance in Sunday’s semifinals.

While Roach finished with 22 points, Timberlake made vital stops to negate any momentum building moments for the Panthers.

“My shots (have) been a little off,” Timberlake admitted. “I never doubted myself, I trust the work that I put in, early mornings, late nights, and I took my shots.”

The senior leadership brought on by Dickinson and Timberlake proved to be essential for the win, Jones said.

“Me and Earl, we’ve been through so much together,” Dickinson said. “Since starting in eighth grade, just been brothers ever since, and it’s just really special to win one with them.”

It was a seesaw match. DeMatha threw the first punch with an 8-0 run late in the opening frame to gain a lead they would not surrender. The Panthers fought all night to obtain an advantage, but the Stags always had a response.

DeMatha received help from junior wing Jordan Hawkins, who finished with 17 points, to head into halftime with a five-point lead.

Paul VI’s best moment came during a 9-0 run that spanned throughout the third and fourth quarter, which included a buzzer-beating 3-pointer from junior guard Trevor Keels (22 points).

However, it was DeMatha’s dynamic pair that stood up once again to seal the win. First, Dickinson stopped the bleeding when he sank two free throws, followed by a couple of 3-pointers from Timberlake to give the Stags a nine-point lead with less than two minutes remaining.

After sinking the second attempt, Timberlake shouted to the crowd with pride, claiming the title was heading home to Hyattsville.