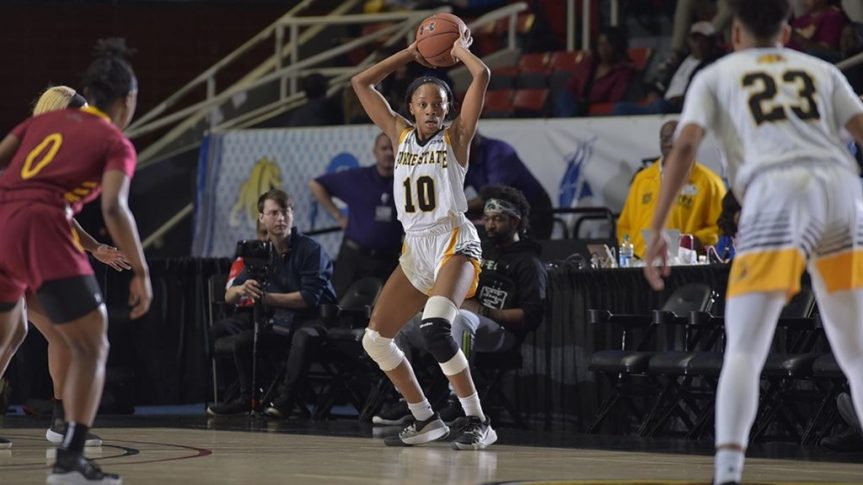 The No. 3 Lady Bulldogs of the North Division, improved to 23-4 while the No. 6 Bears (South Division) conclude their season with a 6-21 record. Bowie State advances to the quarterfinal game on Thursday, where they will face No. 2 Johnson C. Smith University, the No. 2 seed. The game will tipoff at 3:00 p.m. at the Spectrum Center.

Dejoria Howard led the Bears with 22 points while Ariana Fleming added 11 points and scrounged up six steals. Howard and Amani Moxley had five rebounds apiece to lead the Bears.

Shaw scored the first nine points of the contest before going on a 10-2 run to pull the Bulldogs within one 11-10. Fleming scored their last two Shaw baskets of the quarter to extend the Bears lead to four 15-11.
Williams gave the Bulldogs their first lead of the game, 17-16 with a layup at the 5:52 mark of the second quarter, capping off a 6-1 run by the Bulldogs.

Howard countered with a three-point basket to reclaim the lead for the Bears, 19-17, with 5:35 remaining. Bowie State came back with a 10-3 run to take their largest lead at 27-22 with just 1:06 left in the quarter. The Bears, however, battled back, scoring the final four points of the period to trail by one at the break 27-26.

The Bulldogs continued to pull away in the fourth quarter, extending their lead to as many as 28 points before closing out the game with the 73-47 win. Bowie State will take on Johnson C. Smith on Thursday (2/28) at 3 p.m.

As for the Bowie State Men, they will play tonight (Feb. 26) against Livingstone College at 12:10. The Bears are averaging 81 points per game, but are also allowing 81.1 points per game as well. In the 52nd meeting between both teams, Bowie State leads the series 31-20, and both sides split games this season (1-1).