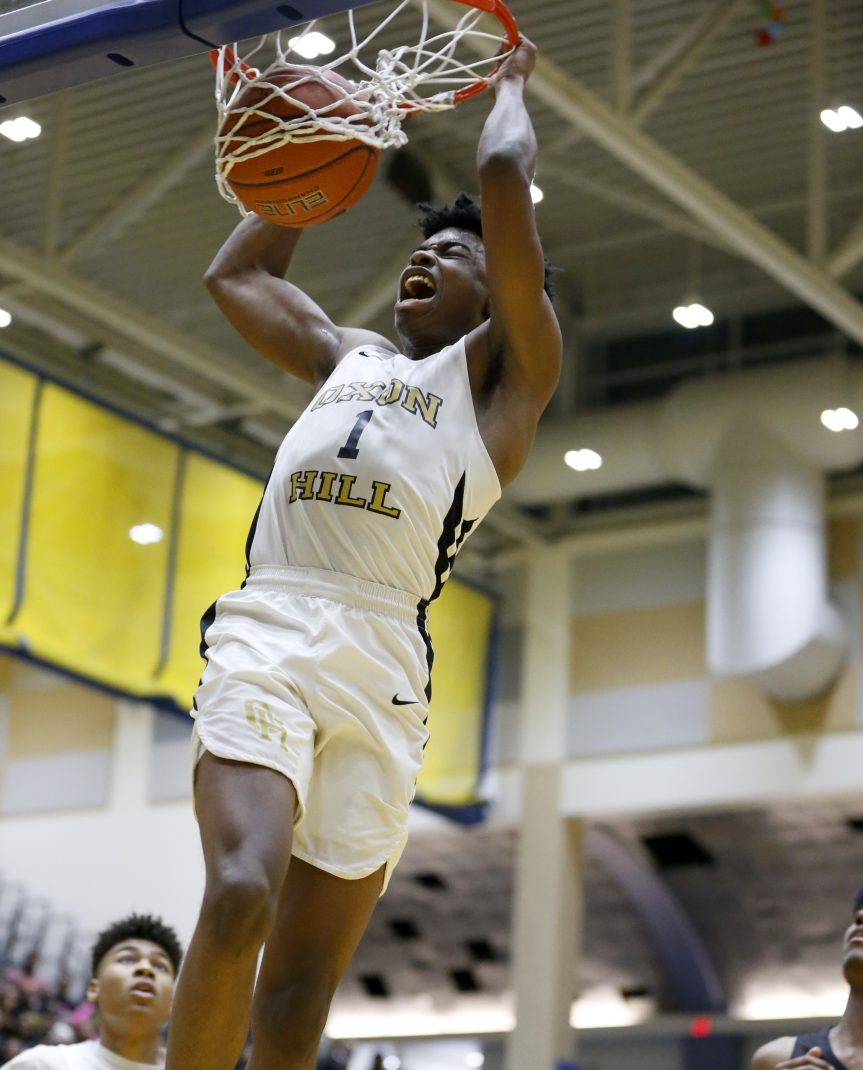 UPPER MARLBORO – With every touch of the ball, Ronald Polite commanded everyone’s attention.

The Oxon Hill High School senior celebrated his 1,000th point as a player seconds before halftime after scoring on a pullup jumper. Head Coach Lewis Howard called a timeout to present Polite an honorary basketball.

In a gesture much like his last name, Polite thanked his coach and had an outstanding third quarter performance: scoring 14 points in three minutes and ending the period with 16 points.

“It happens every game,” Polite said jokingly. “I feel all-around confident in my game. My teammates believe in me and keep feeding me the rock, playing through me and giving me more confidence on defense and offense.”

Polite’s show-stealing performance did more than lead the Clippers to an impressive win before the Maryland state playoffs start. Oxon Hill became the first 3A/2A/1A a boys county championship since Gwynn Park won in 2012.

Howard credits the growing level of competition around the area as a whole that allows other schools to compete with 4A powers like Roosevelt.

Oxon Hill jumped to an early eight-point lead after Polite’s dunk capped off 10-2 run. Despite Roosevelt finishing the first half with an edge in steals (6-2) and the turnover battle, the Clippers continued to agitate guards Quinton Mincey and Joemel McNair into making rushed shots that missed. The latter finished the first half, only scoring two points while Mincey was limited to two points in the second half.

“We did everything in the scouting report,” senior guard Michael Sumner said. “Box out, contain, doing what we need to do, and limit turnovers.”

Meanwhile, Polite took over in the second half, first nailing a 3-pointer to start his run. Following a two-minute break without scoring, the senior scored nine consecutive points. His effectiveness in shooting the ball caused some of his teammates to continue to feed him the ball more often, Sumner said.

Oxon Hill ended the quarter on a 15-3 run with a nearly insurmountable 22-point lead.

“Nothing surprises me,” Howard said. “It literally doesn’t. I told him that we expect him to play at this level. He cannot just do it once because then it becomes an anomaly. He has been consistent for us for the past three years, and he has gotten better. Each level of the game, he has gotten better, and he continues to grow.”

“This was amazing, and we proved a lot of people wrong tonight,” Polite said. “We executed the gameplan, and we came out with the win.”

Oxon Hill will start their playoff journey through the competitive 3A South region hosting Huntingtown at 7 p.m. on Friday night. Roosevelt will have a first-round bye in the 4A region and face the winning of Charles H. Flowers vs. Suitland on a later date.

After a slow start in the opening quarter, including junior center Sydnei Harmon’s early foul troubles, the Lady Jaguars found their rhythm offensively.

While all of her seven first-half points came via free throws, Kaniyah Harris created multiple plays, including an assist in Taniyah Hogg’s late 3-pointer before halftime, to lead Flowers on a 13-2 run.

Oxon Hill did not back away as forward Aniya Wilson continued to slash into the paint for multiple layup attempts, finishing the game with a team-high 13 points, while fellow senior Crystal Monteiro scored all of her 11 points in the second half.

However, the Lady Clippers could not capitalize at the charity stripe as they only connected 9-of-20 of their free throws.

Meanwhile, Kristian Harris, a freshman, shined in the second half, scoring 14 points and sparked a 13-2 third-quarter run. Her elder sister watched with approval from the sidelines as Kristian Harris fired up a 3-pointer to extend their lead into the double digits.

“It is really special to me and hits me different,” Kaniyah Harris said. “I want her to be better than me and to go far; There has never been a sibling rivalry, and I just love when she shows out, freshman or not. She does what she needs to do.”

“Her as my big sister is an inspiration,” Kristian Harris said. “Hearing her say that makes me want to be better.”

The Lady Clippers attempted a late rally, narrowing their deficit to six points after going on an 8-2 run. However, Flowers ended any comeback attempts with six-straight points, capped off two layups by Harmon.

Kaniyah Harris iced the game when she muscled through two defenders and her own teammate for a layup that turned into a three-point play with 42.3 seconds remaining.

“It feels great to put your name back in the paper and say this was not a fluke,” Kaniyah Harris said. “This was hard work, and it is what we put in; we just had to go out there and provide it again and show that this is what we do.”

While they won last year’s county championships, the team’s five seniors were opening celebrating with the championship plaque and taking as many photos as possible.

According to Flowers head coach Roderick Hairston, his upperclassmen understand the importance of competing for a title and value every opportunity that comes their way.

“Not everybody gets to play in the county championship; They have played in two,” Hairston said. “The first two years, they didn’t get to play in any (championship game), so now, with every game, they understand that they have to take advantage of the opportunity that presences itself.”

With the win, Flowers becomes only the second school to repeat as county champions. It is also the Lady Jaguars’ 34th-straight victory against an in-state opponent. They received a first-round bye entering into the state playoffs and will take on the winner of Suitland-Bowie on March 2.

Despite the loss, Oxon Hill was recognized for winning their second 3A/2A/1A regular-season title in three years. They will host Huntingtown Friday at 6 p.m. in the first round of the state playoffs.