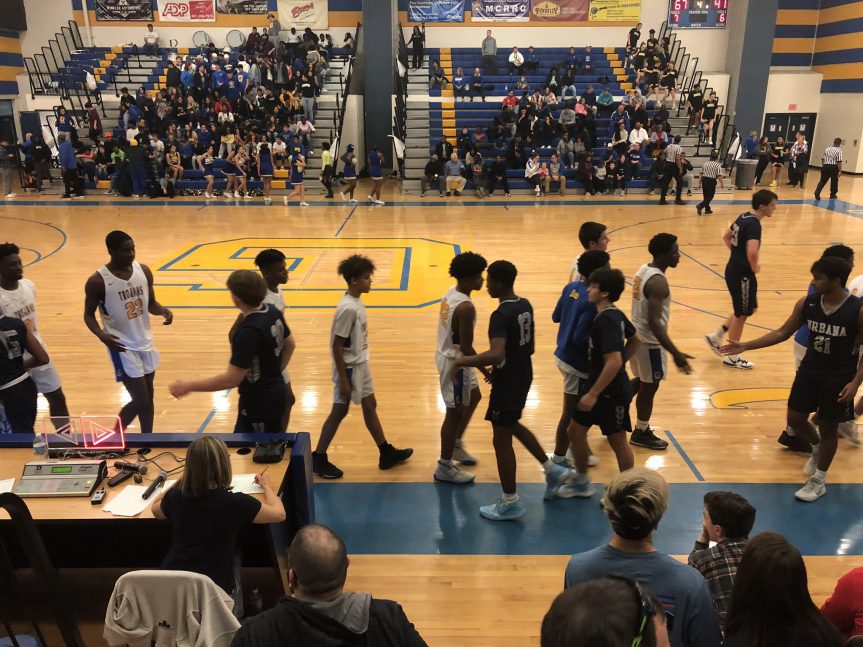 Right from the get-go, the Trojans dominated the contest as they continued their home winning streak and pulverized the Hawks 67-41 to advance to the second round to take on No. 3 Clarksburg.

“We were shorthanded on a lot of guys,” said Gaithersburg head coach Jeff Holda. “We were missing three starters, and guys from the bench who hadn’t played much all year stepped up and carried the load and defended well for the first time in weeks.”

The Trojans were able to nail their shots, rebound well, and force turnovers, leading 17-2 at the end of the first quarter and 34-11 at halftime.

Senior Khalil Young started with 13 points in the first half and ended up being Gaithersburg’s leading scorer with 20 points.

“I feel pretty good,” said Young. “I feel like I played well. I did good on the defensive end and the offensive end to help the team win.”

Coach Holda was also quite impressed with Young’s performance, calling it ‘head-and-shoulders his best game he’s ever played this year.’

“But more importantly, he brought a ton of energy,” said Holda. “He blocked shots, he rebounded and was in passing lanes, and he was in a defensive stance all night. He really opens things up with his shot. He takes shots that other players wouldn’t take, but he’s a knock-down shooter, so we allowed him to take those.”

“I feel like it was a great performance,” said Ituka. “I made sure everybody got shots. I got shots as well, but most importantly, against a team like this who we know we’re better than, it’s best for me just to create for my teammates and give them the same opportunities that I get for myself.”

Ituka also made an impressive block, as he turned the ball over and rushed down the court to prevent a layup by swatting the ball out of bounds.

“When you turn the ball over, the best thing to do is sprint back and defend the ball,” said Ituka. “I just knew I had to stop him from scoring off my turnover. It was a great play.”

With the Trojans’ next playoff matchup against Clarksburg, Ituka believes that their toughest opponent would be Richard Montgomery High School.

“In the playoffs, there’s no time to take any team for granted,” said Ituka. “Every team is good. You never know what’s going to happen. Basketball is a game of expecting the unexpected.”

On the other side of things, Urbana’s leading scorer turned out to be senior Drew Fellows, who put up 10 points on the scoreboard.