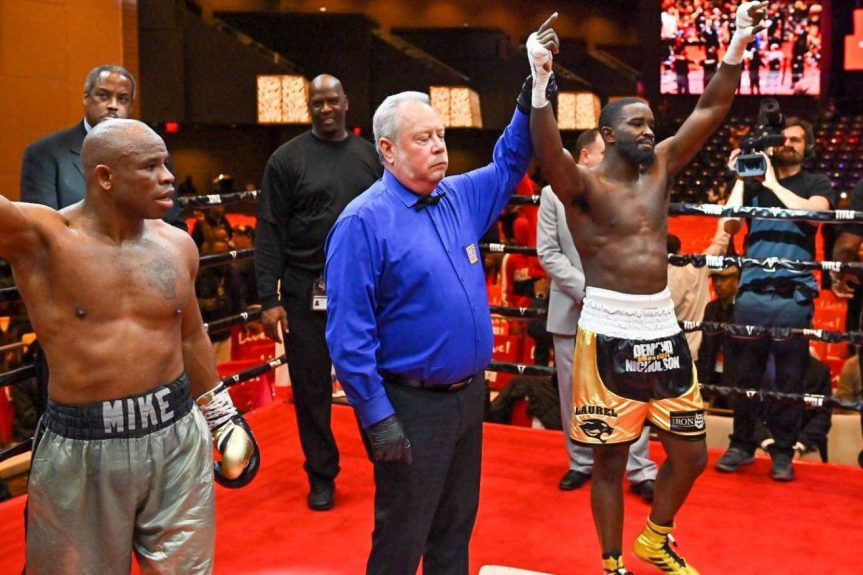 HANOVER – It was 12:50 a.m. when the two main event fighters entered the ring at the Hall at Live! Hotel and Casino. The event was sold out, but several of the fans had left the building after a long night of professional boxing.

Laurel native Demond Nicholson survived and won a split decision over Mike Guy from Sacramento in a fight many thought was not even close. The judges saw it differently and posted scores of 95-94 twice for Nicholson and 96-93 for Guy.

Guy seemed to have only one strategy, and that was to bull rush Nicholson the entire fight and hope to land something hard. He did so in the sixth round when he caught Nicholson with a clean right hand and put him on his knees.

“I hurt him in the sixth round, and I relaxed a little, and he caught me with a good shot,” Nicholson said. “I was not hurt, but I was dizzy, and I had to hold on to get my head cleared. It was early in the round, so I had to hang in there.”

Nicholson needed to show poise because Guy was in his face for all 10 rounds. Guy did not walk in behind his jab like most skilled fighters, he just took off and smothered Nicholson with wild punches that mostly hit on Demond’s gloves.

“Guy had fought some good fighters and was on a winning streak,” said veteran trainer Calvin Ford.

“His health is fine,” said Ford. “Did you see how he got up after the knockdown and kept fighting. That showed me something.”

Nicholson’s kidney issues are well documented, and he now is a spokesman for the Kidney Foundation.

Nicholson was surprised when told one of the judges gave Guy the fight. “I thought I won at least nine rounds. I think he threw one jab the entire fight.” That one jab was hard to find. Guy (12-5-1, 5 KO’s) was a tough customer. Nicholson landed many hard jabs and right-hand combinations, and he kept coming. According to Ford, Nicholson needs to move up to the next level of competition in the coming months.

There were two co-featured bouts on the night. Washington, D.C. native Jordan White scored a seventh-round TKO over Ronaldo Solis from Cancun. White caught Solis with a looping left hook clean on his chin, and the fight was waived over by referee Kenny Chevalier. White improved to 10-1. White was presented the World Boxing Council Youth Intercontinental Super Featherweight belt after his win.

The other co-feature saw Greenbelt native Sam Crossed suffer his first loss to veteran fighter, Nick Kisner from Baltimore by a unanimous decision to win the Maryland State Cruiserweight title.

Crossed is now 9-1, while Kisner improved to 22-5-1. Other locals included Laurel’s Jay Stancil, III, who won on a first-round TKO to improve to 2-0. Malik Loften from Suitland lost a unanimous decision to Charles Clark from Dallas. Brandon Chambers from Owings Mills won a split decision over Christopher Haney to improve to 3-0-1.