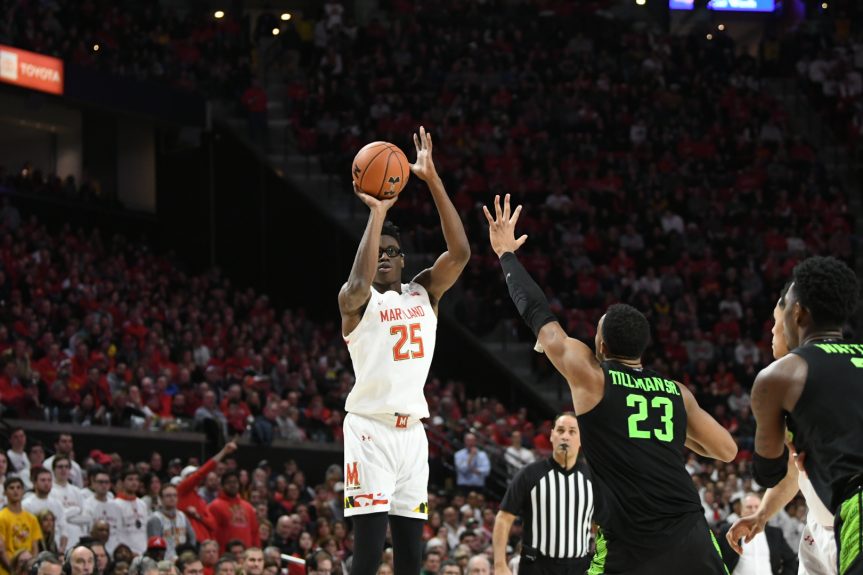 COLLEGE PARK – The University of Maryland was ready to celebrate in front of 17,950 fans packed inside the Xfinity Center Saturday night as the No. 9 Maryland Men’s basketball team was one win away from claiming a share of the Big Ten Conference regular-season title.

Students filled up the arena hours before the opening tip, with added attention that the game was being nationally televised.

Michigan State, meanwhile, had other ideas.

Spartans guard Cassius Winston scored 20 points and was one of four starters to score in double figures as the No. 24 Spartans knocked off Maryland, 78-66, keeping the Terrapins from winning their first conference regular-season title since 2002 on hold. The loss is also Maryland’s second loss in three games.

The Spartans (20-9, 12-6) jumped out to an early 17-5 lead, including scoring the game’s first nine points and never trailed for the rest of the game.

It took Maryland more than two minutes after the opening tip to score their first points as they struggled all night offensively. Meanwhile, the Spartans could not miss as they made seven consecutive shots during their run.

“They were terrific, and we could just never really get going,” Maryland head coach Mark Turgeon.

All season long, Maryland has battled surrendering leads early and have won games late. Midway through the first half, they looked to follow the same script as they jumped out to a 7-0 run, bringing down Michigan State’s advantage down to the single-digits. However, Maryland was shut out for over six minutes before halftime, missing their next seven shots while turnover the ball three times.

Michigan State quickly took advantage, scoring the next nine points and grew its lead back 10 minutes before the halftime break. As Maryland tried to answer, Michigan State countered back. Following a traveling call, Winston capped off the successful first half for the visitors with a halfcourt 3-pointer that extended the Spartans lead to 40-29 heading to halftime.

“They played really well, they had a lot of shots,” Maryland point guard Anthony Cowan Jr. (who scored 20 points) said. “But we also gave them a lot of second-chance opportunities, so we can’t do that again with a team like Michigan State.”

After a Xavier Tillman layup early in the second half, Michigan State’s lead grew to 18 points, the biggest advantage they had all game. Tillman battled with Maryland’s Jalen Smith Jr., all night, finishing with a double-double performance of 14 points and 12 rebounds.

Maryland attempted to rally midway through the second half, dropping the deficit to 10 points and gave the home fans hope for a comeback victory.

However, with four minutes remaining, Winston scored his fifth 3-pointer and proceeded to put his finger over his lips, silencing the home crowd. Maryland ended the game scoreless for the final 2:41 remaining as Michigan State held on to the double-digit victory.

“We just have been lacking on defense a lot,” Smith said. “We gotta get back to our principles of guarding, watch film and fix it up in practice.”

While the Terp players and Turgeon insisted that the attention did not affect their performance, the result dropped their lead over the top spot in the Big Ten standings to one game with two games remaining, including their home finale against Michigan.

Everyone, however, agreed that Maryland would need to show substantial improvements when they take on Rutgers on March 3.