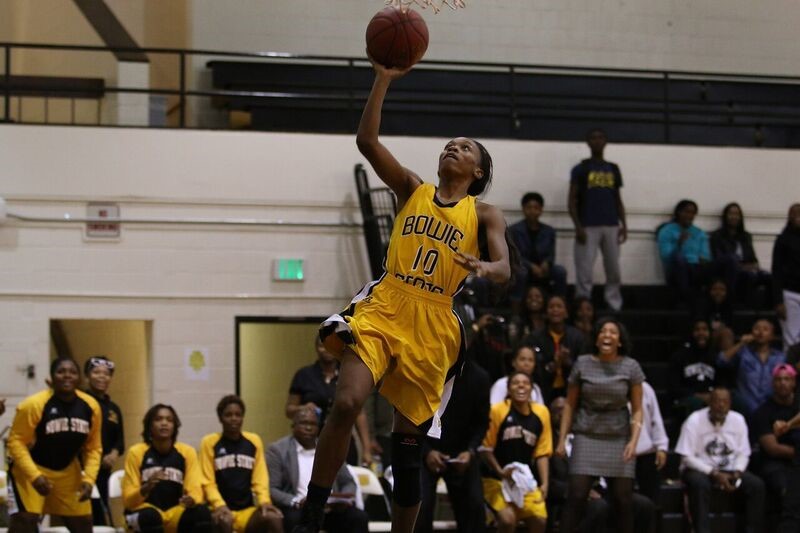 BOWIE – Kyaja Williams has become a vital part of the Bowie State University women’s basketball team’s success this season, so it came as no surprise for the forward to receive numerous honors from the Central Intercollegiate Athletic Association (CIAA).

Receiving the CIAA Defensive Player of the Year award and being named to the All-CIAA team earlier this week has cemented Williams’ place among Bowie State’s most prolific athletes, past and present.

Also, Williams has fostered several conference player of the week honors. She was named to the CIAA All-Rookie Team and BSU Female Athlete of the Year as a freshman and made the All-CIAA team for the second consecutive season.

The 5-foot-8 forward hails from Baltimore and is a former Western High School standout. She led the Bulldogs to a 22-4 overall record in the regular season that included a 12-3 record in conference play.

From the time Williams first entered the program for the 2016-17 season, her role increased. This year, in particular, she has paced the Bulldogs, averaging team-highs of 14.1 points and 10.1 rebounds per game along with 26 blocks and a CIAA-best 110 steals.

While she may be relatively undersized for her position, Williams has consistently found a way to snag rebounds over larger opponents and make timely defensive stops to lift her team to victory.

“Majority of the times, I know that I can outjump a lot of people, so it’s more like a timing thing,” Williams said of her rebounding ability. “Also, it comes with just hustling, wanting to go get it honestly, just going to get the ball.”

Her will to win, along with the support of her teammates, has propelled BSU (25-4) to a spot in the Division II national rankings. Fifth-year Head Coach Shadae Swan has relied heavily on Williams to bring energy and a competitive edge as a team captain. Thus far, Williams has functioned perfectly in her role.

“She’s like a little energizer bunny. She always comes out with a lot of energy, like she’s the motor that keeps us going,” Swan said of Williams.

Most recently, Williams led an 11-0 late-game comeback effort that culminated with a buzzer-beating layup to propel the Bulldogs to a 48-47 CIAA quarterfinal tournament win over Johnson C. Smith on Feb. 27 at Bojangles Coliseum in Charlotte. Williams once again led the way with 12 points and 10 boards for BSU.

Guard Shawnkia McCallum registered a game-high 13 points to go with six rebounds and two assists, and Williams pulled down a team-high seven boards to fuel Bowie State to a 53-41 tournament semifinal win over conference foe Virginia Union to send the Bulldogs back to the title game for the first time since 2018.

Fayetteville State and Bowie State split the regular-season series, and a win in the CIAA title game would have not only broken the tiebreaker but would have been the Bulldogs’ first conference championship since 1999.

BSU managed to rally back from a first-quarter deficit and take a narrow lead early in the third, but FSU forced a series of late-game turnovers and capitalized on the offensive end to end the quarter on a 9-3 scoring run.

The Broncos sustained that momentum throughout the fourth quarter and was powered by Shantel Bennett’s 24 points, four assists and four steals, and Katisha Hyman’s 20 points and five steals to pull away with a 61-53 victory over the Bulldogs at Bojangles’ Coliseum.

“Playing three games in a row, we started to get a little fatigued,” Head Coach Shadae Swan said after the loss, which sets Bowie at 25-5 overall. “We didn’t have the same energy. Every time we made a run, they made a run in return. We didn’t play our best today.”

Kyaja Williams led the way for the Bulldogs with 14 points, 13 rebounds, five assists, and five steals. In addition to Defensive Player of the Year honors, the forward also won the Lowe’s CIAA Senior Class Award.

Hoping to put this loss behind them, BSU will now await the rankings and brackets for the Division II playoffs. After being eliminated early last year, the Bulldogs hope to make a deeper postseason push this time around.

“This is a tough loss,” Swan added. “But if we play the way that we’ve been playing, we can go far in the NCAA Tournament.”