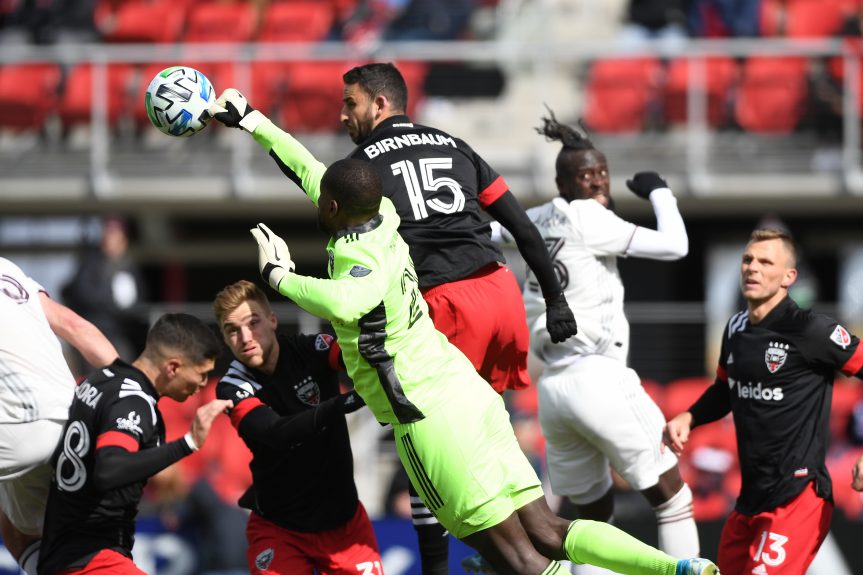 WASHINGTON – A 92nd-minute goal left 16,932 spectators at Audi Field on Saturday afternoon speechless as the Colorado Rapids pulled away with a 2-1 victory over D.C. United on the opening day of the Major League Soccer (MLS) season.

The result negated a lot of the good feelings surrounding the Black-and-Red coming off a three-game win streak to close out the preseason. Their new designated player, midfielder Edison Flores, was a part of the starting 11 in front of a large contingency of Peruvian fans in attendance while other fans were excited to see United’s offensive approach to the season.

However, United did not score in the first 45 minutes despite multiple opportunities on goal. Striker Ola Kamara’s driven free kick attempt in the first half could not clear the Rapids wall, while Julian Gressel had a goal disallowed following an offside call.

“It’s really disappointing because I thought we had a solid first half,” Captain Steven Birnbaum said. “We started with energy and created more chances than them.”

United continued its offensive efforts in the second half and finally capitalized after Russell Canouse on a header from the far corner for the game’s opening goal. Canouses’ header took a quick bounce off the ground before beating a diving Rapids for his second career goal.

“It’s always nice getting on the scoresheet and being able to help the team, not only defensively but contributing in attack as well,” Canouse said. “It was a corner kick, and I just took my position trying to block the goalkeeper, and then once Julian approached the ball, I just peeled back post, trying to lose my man. Luckily the ball popped up at the back post, and I just put it in.”

However, Colorado responded after United’s defense cleared a corner kick opportunity out their penalty area. English midfielder Jack Price returned the ball back into United territory, and striker Kei Kamara rushed inside to connect a header that flew past goalkeeper Bill Hamid (DeMatha Catholic High School) for the equalizer.

Meanwhile, aside from taking out Flores midway through the second half, D.C. United head coach Olsen elected not to use any more of his remaining substitutions for the rest of the match.

When asked about the decision, Olsen said it was important to keep height on the defensive side to combat Colorado’s crosses into his penalty area.

Following the game-tying goal, Colorado became the aggressor in the latter stages of the match. With seconds remaining before the 90th minute, midfielder Kellyn Acosta fired a low driven shot towards the right goalpost. However, Hamid stuck his hand out during a diving save to keep the game leveled.

Moments before the final whistle, Colorado dribbled upfield for one more attack, with striker Diego Rubio dribbling the ball into United’s penalty area and passing to Acosta. The U.S. international player attempted to give it to Rubin, but the ball instead began to ping-pong around players in front of the goal.

Rubio and United defender Frédéric Brillant collided with each other to gain possession, pushing the ball to a wide-open Lewis, who fired a one-time into the net for the game-winner.

“We gave up two goals that they shouldn’t have been in that situation to finish off plays,” Olsen said. “But make no mistake, they are better. Robin (Fraser) is a good coach, and they have a nice mix (of players)…Giving up that many set pieces to Colorado is always dangerous. They are as good as any team in the league in that department.”

With expansion side Inter Miami CF coming into town on March 7, it will be key for United to take key lessons from the loss while including much of the positives. Flores had “his best performance” in a United uniform since his signing in January and will continue to grow into the league as the season progress, Olsen said.

Meanwhile, the defense will need to improve to return to its status as the league’s best from last season, the head coach added. Too many times, United was too anxious to get the ball away instead of building attacks from the back, “which cost us energy and moments of attack.”

“We weren’t patient in our shape,” Canouse said. “We were kind of in-between trying to press on and holding. That kind of gave Colorado the ability to have more control over the game, and they ran our legs off a little bit and put us under in the last 20 minutes.”