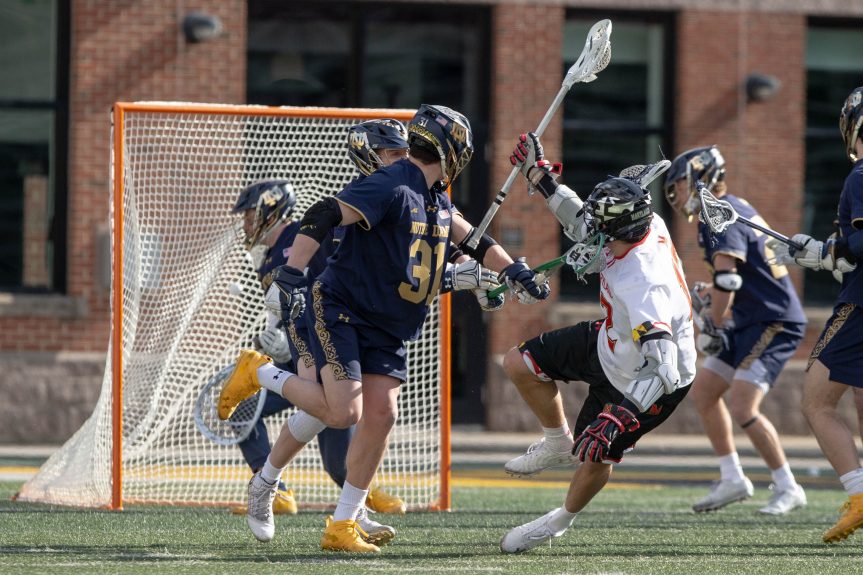 With the win, Maryland (4-1) bounces back after an 11-day layoff with a win, regaining its composure after losing to Villanova on Feb. 18. The Terrapins were initially scheduled to face Navy on Feb. 22, but the game was postponed after several members of the midshipmen lacrosse team contracted the norovirus, a contagious virus that causes vomiting and diarrhea.

Head coach John Tillman said that Maryland focused on mistakes made against the Villanova loss. In contrast, others were able to recover from lingering injuries or fatigue with the extra free time.

Despite having the option to play Norte Dame inside Cole Field House, Tillman said his team was well-conditioned and ready to play in “lacrosse conditions” after the long layoff.

“I’m just really proud of how these guys handled those ten days,” Tillman said. “It’s tough to go that long and not go stale or stagnate, but these guys did a good job with their preparation.”

Senior attacker Jared Bernhardt opened up the scoring for the Terps, firing in two goals within two minutes midway through the first quarter. Despite Norte Dame (2-1) responding right back with two goals of their own, the early start by Maryland was part of an initial strategy to make their presence known early, Tillman said.

“Coach Tillman was emphasizing [score goals] in the first five minutes and understanding that if we win those, we would have a good start,” defender Nick Grill said. “We haven’t been to great advantages. We have been in holes early in games, especially the past two games, so getting out, being excited out there, and starting the game hot with the understanding that getting out to a good lead would help us out.”

Maryland’s offense displayed its dominance early and often throughout the game, finishing the contest with 64 shots with Wisnauskas launching 17 attempts alone. He scored his first goal with 2:17 remaining in the first quarter after receiving a pass from Russell Masci.

Norte Dame scored two consecutive goals to open the second half and taking a one-goal lead.

However, the Fighting Irish’s lead quickly disappeared as Maryland scored four of the last five goals in the first half. Jack Brennan tied the game with 7:44 remaining while Masci helped the Terps regain the lead.

After Norte Dame scored an equalizer, Wisnauskas responded by taking the ball from the end line, running away from the crease before launching a quick shot before being tackled the ground. The ball landed inside the net for Maryland’s sixth of the match. Midfielder Kyle Long added on an extra goal late to give Maryland a two-goal advantage (7-5) heading into halftime.

Maryland’s offensive success continued into the second half thanks to the faceoff play by junior Justin Shockey, who won 18-of-26 draws. Every draw win placed the Terps in a favorable position by starting each possession on offense, Tillman said.

With two other faceoff specialists on the sidelines in junior Joel Trucksess and freshman Conor Calderone, Tillman knew how much he was impressed by their professionalism in supporting their teammate in a big game.

“You can hear all the faceoff guys support Justin today, and to me, that’s when you know you have a good group,” Tillman said. “You may not be getting what you want, but you are supporting your teammate.”

The Terrapins scored three consecutive goals after the halftime break, with Wisnauskas completing his hat trick after junior midfielder Bubba Fairman’s shot crashed onto the crossbar. Maryland quickly regained possession and found the junior ready to launch his third goal of the game and give Maryland a two-goal advantage.

“Next shot mentality. I was kinda pissed off, [Entenmann] was making some good saves,” Wisnauskas said. “You gotta hit the reset button. Next shot is going in, just have to have that mentality.”

He added his next two goals in the fourth quarter to cap off his five-goal performance and started a streak of four unanswered goals for Maryland. Meanwhile, goalie Logan McNaney made 10 saves to earn his first career win as a Terp.

Maryland will look to continue their positive momentum going when it faces Albany at home on Mar. 7. Start-time is 1 p.m.