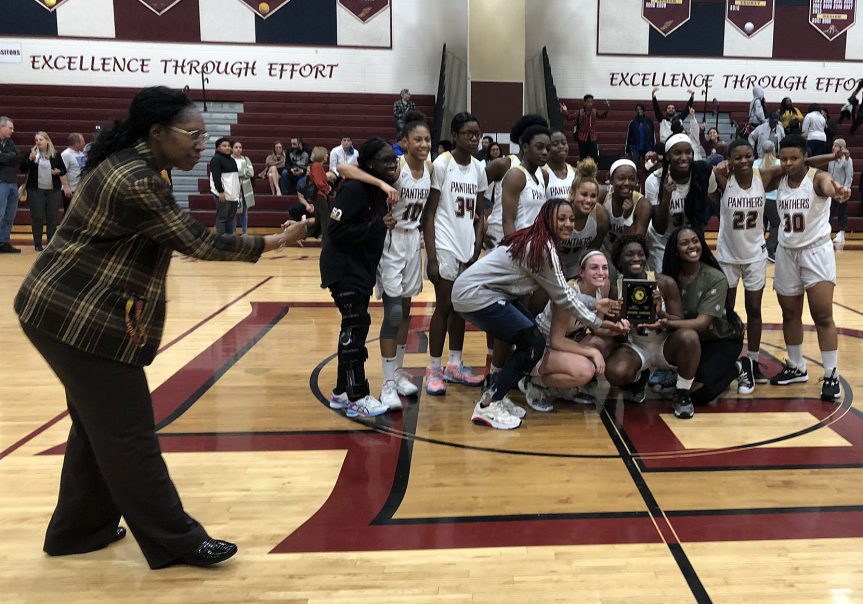 BURTONSVILLE — Many girls’ basketball regional championship games took place Wednesday night as one of them featured No. 1 seed Paint Branch and No. 2 seed, Sherwood, in a 4A North title matchup.

The Panthers had the momentum for the majority of the game, thanks to a scorching hot total of 32 points from senior Patricia Anumgba, as she led her school to a 68-56 victory over the Warriors to advance to the state quarterfinals.

“It feels very good,” said Anumgba. “But we can’t celebrate too much. We’ve got to get back in the gym, and then get a banner for states.”
Anumgba’s head coach Jocara Knight was also proud of her leading the way for Paint Branch.

“Patricia, she’s my Achilles heel,” said Knight. “The way she goes, the way the team goes. If she’s on, we on. If she’s off, somebody’s got to step up and take that responsibility until she decides to come back on again.”

The first-year head coach and his Panthers were able to win their first regional title since 2015, despite injury issues.

“We’ve had a lot of uphill battles,” said Knight. “We’ve had about 2-3 girls tear their ACLs this year; to fight through that mentally was just a hardship right there.”

Very quickly, Anumgba was able to get hot for Paint Branch, as she dropped seven points on two 3-pointers and one free throw.
Then she added 13 more points on four more shots from beyond the arc to finish the half with 20 points, as the Panthers led Sherwood 28-18 at halftime.

Anumgba continued to ball out in the second half by adding 12 more points to finish with 32 total and seven three-pointers.

“It’s not a different feeling,” said Anumgba. “I’ve been averaging about 27 in the month of February, so I knew I had to come out and score for my team for us to win.”

Anumgba also wears the jersey number 24 because of her favorite player, Kobe Bryant, as she showed that ‘Mamba Mentality’ Wednesday night.

“I actually picked that number when I was a freshman,” said Anumgba. “Kobe’s mentality is what got me to where I am right now, working out, always in the gym, hitting those shots, taking those shots even when you’re tired, playing AAU, those back-to-back games.”

Senior Cynthia Stewart also stepped up for the Panthers in the second half and dropped 10 points against the Warriors.

“We’ve just worked for this for four years now,” said Stewart. “We’ve gotten it one game before this point, so we’re just proud to get to this point and get into Towson next game.”

Stewart was also in awe of Anumgba’s performance but stated that she’s always impressed with her teammate.

“She’s a dog,” said Stewart. “She always comes out to play. She knows what she’s doing. She’s making them every game. I love her, proud of her.”
After the game ended, the team celebrated by cutting down the nets at each end of the court.

“This is what I’ve been dreaming of since I was a freshman coming in, playing on varsity,” said Anumgba. “So to accomplish this my senior year is like a really good feeling.”