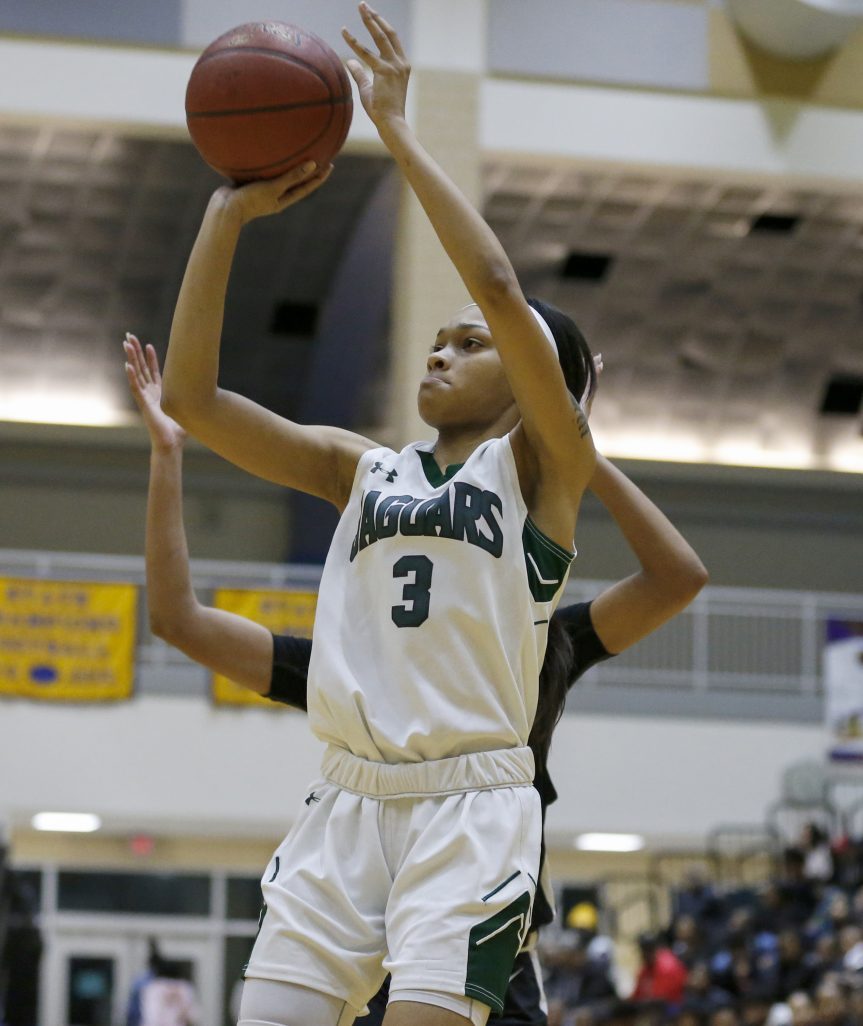 Flowers (18-0) has been on a mission this season to win a second consecutive state title. With its defense being the team’s strongest asset, the Lady Jaguars look to improve on their offensive side during the playoffs, Head Coach Roderick Hairston said on Feb. 26. None of Flowers’ players are currently averaging more than nine points a game, according to the stat book.

“We have to be more consistent on offense,” Hairston said. “And we have to take care of the basketball when Kaniyah is off the floor. We have been working on it all year, but we have to be better if we are going to win their state championship.”

Flowers sits as the No. 2 in the 4A heading into the state quarterfinals. The Lady Jaguars will look to Harris, who was named the Prince George’s County Player of the Year last week, to come up big again in the big stage. In last year’s title game, Harris scored a game-high 23 points in Flowers’ historic championship win.

“Right at jump ball, that is the push we need,” Harris said. “Everything else will handle itself, and the game will go where it goes, but if we can come out the way we need to come out, the game will take care of itself.”

They will be joined by No. 8 Parkdale, who took advantage of the new double-region format to rebuild its season — entering the regional portion of the playoffs as the No. 3 seed with a 5-11 record, they defeated High Point and Bladensburg to set up their Region I matchup against Laurel.

The Lady Panthers survived to win by one point over the Lady Trojans, 44-43, to win the school’s third regional title. Parkdale will travel to face undefeated No. 1 Howard on Friday.

In both of their playoff games, the Golden Tigers have outscored their opponents 200-16. They were already having a historic season after winning the Willard Division County Championships and finished the regular season with a 16-1 record.

Their squad, coached by Abdi Mohamed, came into conference play battled-tested as they competed against quality teams from the area in the She Got Game Tournament as well as the Title XI games in Washington, D.C.

CMIT also took down two 4A county sides as well in Eleanor Roosevelt and DuVal and defeated 2A’s Gwynn Park, before the playoffs.

The Golden Tigers, placed as the No. 1 seed in the 1A, could do more damage in the state quarterfinals as they prepare host Snow Hill on Friday to punch their ticket to Towson.

CMIT North will not be alone as Surrattsville (13-5) knocked off Central, 70-15, in the Region II Championship to become the second PGCPS representative out of the 1A South. With the victory, Surrattsville won its first regional title since 2009. Listed as the No. 6 seed, the Hornets will travel to on Bohemia Manor of Chesapeake City on Friday night.