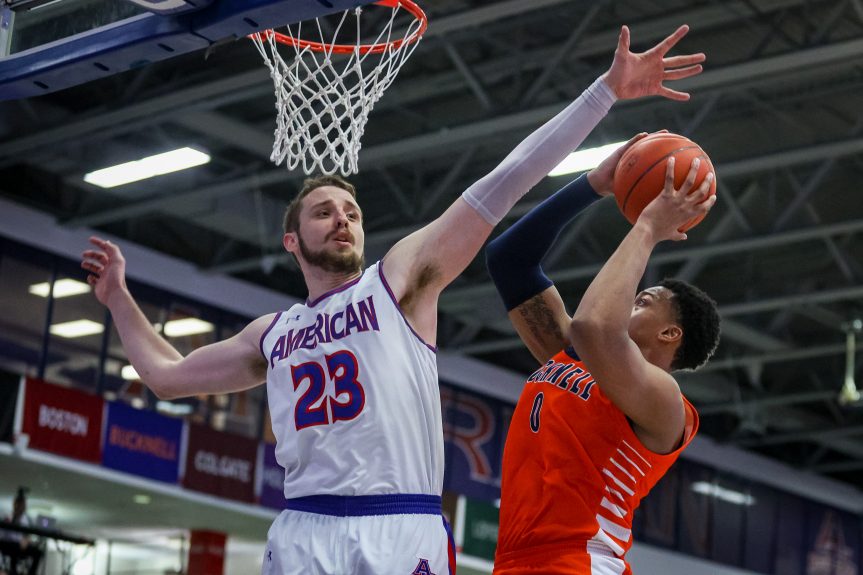 WASHINGTON – After splitting their regular-season series, Bucknell University (14-19, 9-5) outlasted American University (16-14, 12-6), 64-59, in the quarterfinals of the Patriot League conference tournament on March 5.

The Bison had a gameplan similar to the previous two matchups, switch on American ball-screens, and make everyone but point guard Sa’eed Nelson beat you.

Nelson ended up scoring a game-high 22 points, but only converted on seven of 18 attempts from the field shooting; he had seven rebounds and five steals. Guard Jamir Harris was the only Eagle to score in double-figures with 15 points and three rebounds.

“Sa’eed Nelson is a great player,” Bucknell head coach Nathan Davis said. “There’s no other way around it. Our thing was, we wanted to make sure is if he scored, he had to earn it, and the other guys didn’t get set three’s.”

Toomer led the charge with a team-high 18 points and four assists, followed by 12 points from the inside presence of Newman and Meeks, who both combined for 22 points. The Bison relied on stingy defense and physical play to hold the Eagles to just 36% shooting from the field.

“It’s March; it’s all about winning at this point,” Toomer said. “Especially senior season, you wanna win as many games as you can. Everybody wants to make the tournament.”

Bucknell was able to first take control late in the first half after being down by five points with a 7-0 run. After Toomer hit a 3-pointer to take a one-possession lead, the Bison held the Eagles scoreless for more than six minutes. The drought was broken by back-to-back buckets to end the half, facing a 30-29 deficit.

The Eagles fought an uphill battle after the Bisons opened up the second half with five consecutive points to give them a five-point lead.

Every time the Eagles tied the game or got to within one point, Bucknell had a response. When forward Connor Nelson gave American its first lead of the second half with a layup, guard Walter Ellis responded with a 3-pointer to provide Bucknell with a three-point lead.

When the senior Nelson nailed a 3-pointer to bring American to within one point, Bucknell guard Andrew Funk and Newman responded and decreased the deficit back down to five.

After the extended field goal drought, the Eagles had one more push in them to win the game. Harris gave American its last lead of the night at the end of a 7-0 run late in the second half.

But as Harris ran down to the other side of the court, Toomer caught him in a lousy position defensively and finished a three-point play to give the Bisons the lead. Harris tied the game up with another 3-pointer on the ensuing possession, but it was all for naught.

“Just unreal,” Nelson said while describing Harris’ impact as a shooter. “Jamir and I’ve been saying this all year, is the best shooter on our team. No matter if he’s 0-5, I’ll never tell him to stop shooting, and he knows that.”

The Bisons outscored the Eagles 6-1 in the final moments of the contest, with Jimmy Sotos sealing the deal to give Bucknell a two-possession lead with 18 seconds left on the clock.

As the clock hit zero, Toomer walked back toward the Bucknell band section and yelled out, ‘this is our sh**’ while his teammates surrounded him. Bucknell will play Boston University Saturday in the semifinals.

“They made plays…they deserved to win,” American head coach Mike Brennan said, “I thought we got decent looks but, you know, at the end of the day there switching caused us to be a little too stagnant.”