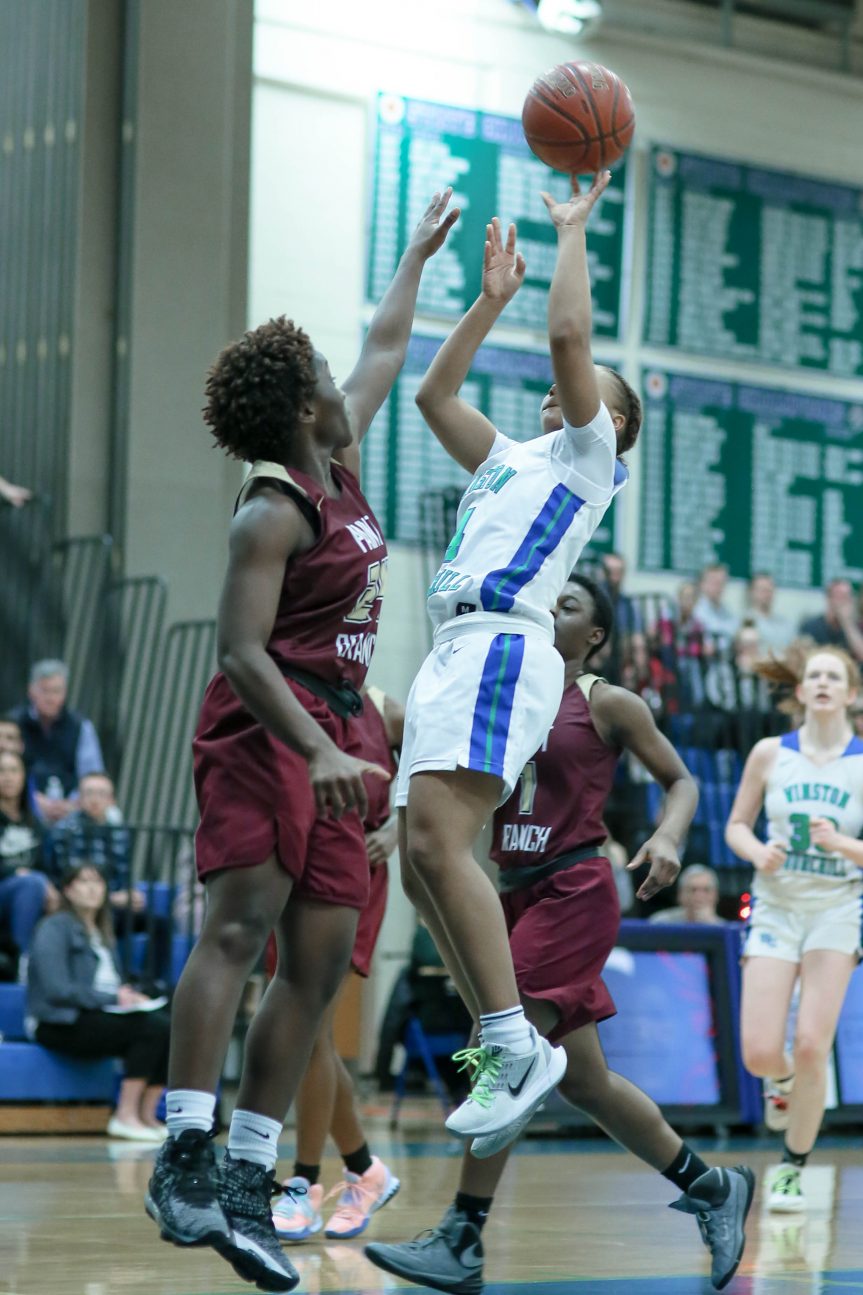 The first quarter was very competitive, but once the second quarter began, the Bulldogs took over the contest for a 68-30 victory over the Panthers to advance to the state semifinals.

“The girls have been looking sharp all week,” said Churchill head coach Kate Blanken. “We went through what we needed to yesterday in practice. I know we had a close game with Paint Branch in December, but we said, ‘Think of all we’ve done in the past three months. We’re a different team, and we’re ready.’”

Paint Branch was able to keep up with Churchill in the first quarter, as senior Patricia Anumgba continued where she left off Wednesday night and dropped eight points, with the visitors leading 9-8.

However, the game became pretty one-sided after that, as the momentum swung in the Bulldogs’ favor, with the home team dominating the paint and playing solid defense.

After putting up eight points and trailing by one heading into the second quarter, Churchill scored 23 points and held Paint Branch to six points, leading 31-15 at the half.

“Once we were on a roll, it was hard to stop us,” said Blanken.
Junior Parker Hill dropped 12 points on six shots in the first half and continued her dominance in the second half with 13 more to finish the night with a total of 25 points.

“I feel pretty awesome, especially after getting injured on the first play of the game,” Hill said. “Honestly, it was great to play with my whole team. Everyone was on; everyone was ready.”

Another Churchill player who stepped up in the win was senior Brittini Martin, who scored 12 points against Paint Branch.

“To me, it doesn’t matter to me about the points I put up,” said Martin. “It’s the team effort. I was just working together and carrying the win.”

Blanken has been very impressed with these two all season.
“They are so good at executing the gameplan,” said Blanken. “We talked about getting it to Parker early, and then it would open Brittini up more and more and do exactly that. The defense was fantastic as well.”

Martin is one of six seniors on this stacked Churchill squad, along with Leah Rubino, Lia Papageorge, Katie Stanish, Madison Cuthbert, and Kaila Wilson.

“This is my biggest senior class ever,” said Blanken. “I have six seniors, and they’re all very dear to my heart, so in that, it’s our last home game, we had to cut it down.”

When the clock ran out, the Bulldogs players celebrated by posing for pictures and cutting down one of the nets, with Martin being the last to cut them down completely.

“It’s the first time in a long time since we’ve been this far,” said Hill. “We got to cut the nets, which is always really fun. Our team played super well.”

With the win, Churchill will face Charles H. Flowers, another undefeated squad, in the state semis.

“Top four now,” said Hill. “So it’s going to be close games from here on out.”