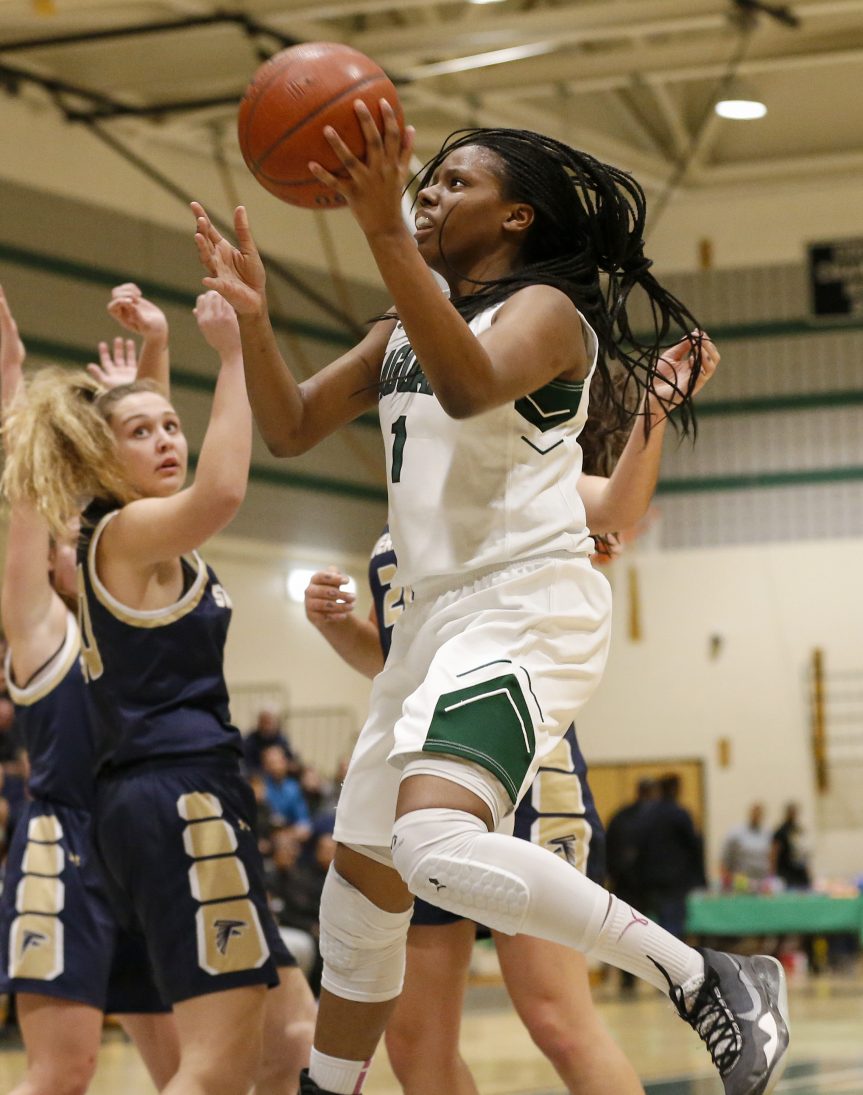 While she is naturally a distributor-first, point guard Kaniyah Harris realized that her team needed for her to take over. With every possession of the ball she took, the senior Lady Jaguars star pounded at the Falcons defense with multiple drives to the basket.

By the end of the game, while trying to catch her breath, Harris said she knew she “gave it my all” to victory.

“I love it when my teammates score more than I do, I have nothing against that,” Harris said. “But sometimes, I got to go hard, and I felt like they came here tonight to end my senior career, and I was not ready for that.”

The senior scored a game-high 25 points as the Lady Jaguars earned a hard-fought 55-34 victory over Severna Park to head to the Maryland Public Secondary Schools Athletic Association (MPSSAA) 4A state semifinals next week.

After early-scoring struggles, Flowers found its scoring touch thanks to freshman Kristian Harris’ two 3-pointers and Kaniyah Harris’ buzzer-beating three-point play to end the first quarter with a 16-12 lead.

Slowly, the rest of the team started to find its way as guard Taniyah Hogg (8 points) fired off two consecutive 3-pointers as part of a 14-2 run in the second quarter.

Severna Park found holes throughout the game in Flowers’ trap defense, as Lena McLaughlin led all Falcon players with 13 points.

However, they were unable to score when on offense consistently. Meanwhile, Flowers’ adjustments at halftime created extra space for turnovers as they finished the second half with five steals.

Kaniyah Harris continued pressuring the Falcon defense with drives in the paint for scoring opportunities as the Flowers advantage grew to 14 points at the end of the third quarter.

Head Coach Roderick Hairston called her “the best player in the state” based on her performance and was glad to see her take control when her teammates were struggling to lead them to another win.

“She took charge in every aspect that we needed her to do,” Hairston said. “We needed baskets; she made baskets. We needed some rebounds, and she made rebounds. She controlled the tempo and did a really good job tonight.”

Flowers will have a big task ahead of them in the state semifinals on March 12 as they prepare to take on undefeated Churchill High School at Towson University’s SECU Arena.

The Bulldogs are led by junior power forward Parker Hill, who completed a double-double performance of 25 points and 14 rebounds in their state quarterfinals win over Paint Branch.

Hairston said he and his coaching staff plan to study game film to prepare for the matchup against a “well-coached” Churchill team.

While Kaniyah Harris will be asked to lead Flowers to a win, a more collaborative effort by all their players can make the journey to a state title a lot smoother.

“We need more energy as a team,” Kristian Harris (11 points) said. “Sometimes, one person pops out for a game while someone else pops out in another game. I think if we just all pop off at once in one game, our energy will be amazing, and our score will skyrocket.”