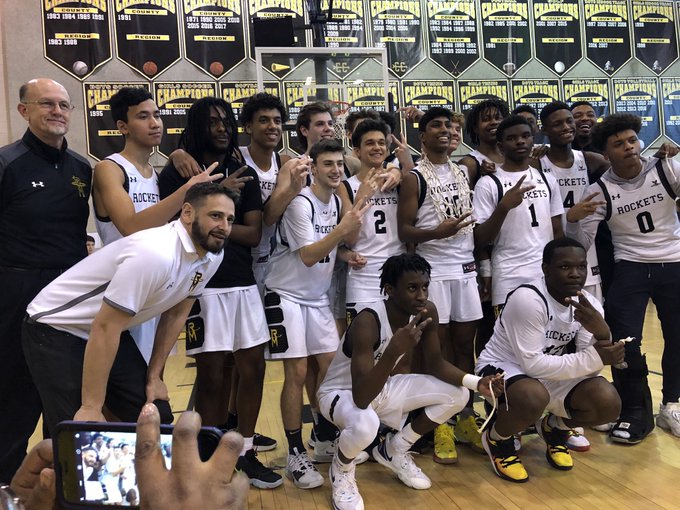 The first quarter was very competitive, with the Wildcats leading by the end. Still, the Rockets got it together and dominated the rest of the way to win 77-55 to advance to the state semifinals for the second consecutive year.

“Doing it the first time, you’re feeling very confident,” said RM head coach David Breslaw. “And the second time, it can be a little scary, but we had to trust, and we know we practiced enough.”

After trailing 8-3, Arundel took control of the rest of the first quarter, with players like junior Robert Keith and sophomore Azim Sana knocking down shots. The Wildcats led 16-13 at the end of the quarter.

Nevertheless, RM still brought their A-game when the second quarter began and had the momentum swing in their favor from that moment afterward.

Junior Shaq Samuels was on fire in the first quarter with three consecutive three-pointers and 15 points in the first half and then added five more in the second half to finish the day with 20 total points for the Rockets.

“It feels real, real good,” said Samuels. “It feels rewarding. We worked hard in summer practice, and it’s good to eat the fruits of your labor.”

“We basically just wanted to come together as a team,” said Lewis. “Play team ball, and it just so happened that we broke out. Any of us can break out at any time.”

Junior Jabrill Robinson was another Rocket who finished in double-digits, as he finished with 14 total points.

“They stepped it up in playoffs,” said Breslaw. “We had a couple of games in the regular season where sometimes guys weren’t always bringing it everything they can, and then now the playoffs come, they’re playing with that playoff mentality.”

When the clock ran out, the Rockets players and fans met up and jumped around in celebration, while the players cut down the nets on each side of the court.

“There’s always that little thing in the back of your mind that knowing it didn’t become a reality, and that what we’ve been doing actually produced, and produced in space. It’s awesome. It’s a great relief.”

Samuels also reflected on playing home games with this great group of seniors.

“I love all those guys,” said Samuels. “I trust them, and they trust me just as much, and we just play really well as a team.”