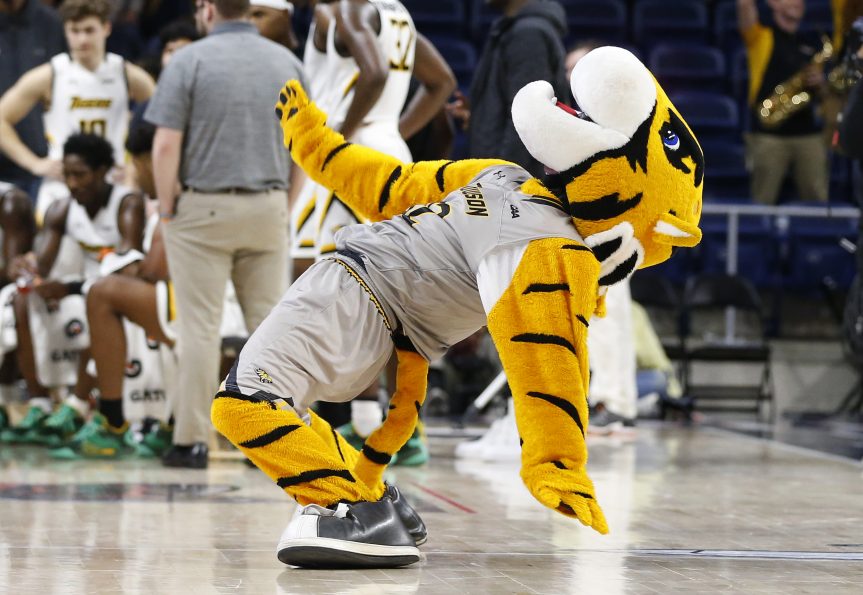 WASHINGTON – Upsets surrounded the Entertainment and Sports Arena in Washington, D.C. during the CAA Men’s Basketball Championship Sunday night as two of the top seeds were eliminated in the quarterfinals.

In the nightcap, four players scored in double-figures to lead No. 6 Northeastern past No. 3 Towson 72-62. Both teams recently faced off in their regular-season finale with the Tigers pulling away with a 75-72 win on March 1. Northeastern head coach Bill Coen said that game provided the setup to the team’s offensive strategy heading to their quarterfinal matchup.

“We knew Towson was going to blitz on ball screens,” Forward Maxime Boursiquot said. “We just had a gameplan to slip me into the mid-post or anywhere and be more aggressive. That is how they defended us (on March 1), and that is what works for us. We always got good looks and kept going with that.”

The Huskies led by as much as 16 points in the second quarter thanks to Boursiquot, who bullied the Tigers defense in the paint en route to his team-high 16 points. Towson attempted to rally back as guard Jason Gibson (Sidwell Friends) connected with an early 3-pointer while Rochester-native Brian Fobbs scored 10 of his game-high 21 points in the second half.

However, freshman Tyson Walker, who was dealing with a left shoulder injury, scored 13 points off the bench to lead the Huskies to their seventh semifinals appearance in eight years.

Northeastern will take on No. 7 Elon on Tuesday at 8:30 p.m. after the Phoenix stunned No. 2 William & Mary earlier in the day. Carried by a double-double performance of 20 points and 15 rebounds by freshman Hunter Woods, Elon becomes the first No. 7 seed to defeat a No. 2 seed in the CAA Tournament since 2004.

After defeating James Madison in the first round on Saturday, Elon jumped out on a 13-2 run and proceeded to connect with eight 3-pointers throughout the first half to take an 11-point advantage heading to halftime. William & Mary cut their deficit to two points in the second half after going on a 13-3 run of their own.

As the teams traded the lead, guard Hunter McIntosh (11 points) connected with a huge trey to put the Phoenix back on top, 66-61, with 1:24 remaining. Guard/forward Marcus Sheffield II (19 points) nailed a pair of critical free throws in the final seconds to solidify the historic upset.

“This means a lot for us, especially after we struggled a lot earlier in the season during conference play,” Sheffield said. “To make it this far is really good, but it is not over. We are going to keep pressing forward, but it definitely feels good based on we started off the season.”

Top-seeded Hofstra earned a convincing 61-43 win over No. 8 Drexel in the opening game of the quarterfinal round. Senior Eli Pemberton scored 15 of his 19 points in the second half and collected 12 rebounds in the dominating performance. It is the fewest amount of points the Pride has allowed in a CAA tournament since they joined the conference in 2001-02.

Hofstra led by three points (25-22) at halftime but exploded when Pemberton connected with seven straight shots. The Pride poured it on, expanding their lead 20 points after guard Jalen Ray (14 points) fired off a 3-pointer with 8:14 left in the game. Two more players, Desure Buie (14 points) and Isaac Kante (13 points), also scored in double-figures in Hofstra’s win.

Meanwhile, former DeMatha Catholic High School star Nate Darling scored a game-high 25 points as No. 5 Delaware defeated No. 4 Charleston 79-67. The victory sets up a semifinal game against Hofstra at 6 p.m. and snaps a nine-game losing streak to the Cougars, including two losses in this year’s regular season.

Darling connected with five 3-pointers, including a trey to extend their lead to nine with six minutes to play, while sophomore Justyn Mutts posted his 11th double-double of the season with 12 points and 11 rebounds. Delaware scored eight of the game’s final 10 points to secure the win.

“I kept telling our fellas in the huddle, ‘we’ve been here twice, let’s not do this again, we know how to win this time,’” Darling said. “We just kept fighting and got a couple of big stops and hit a couple of big shots to extend our lead.”