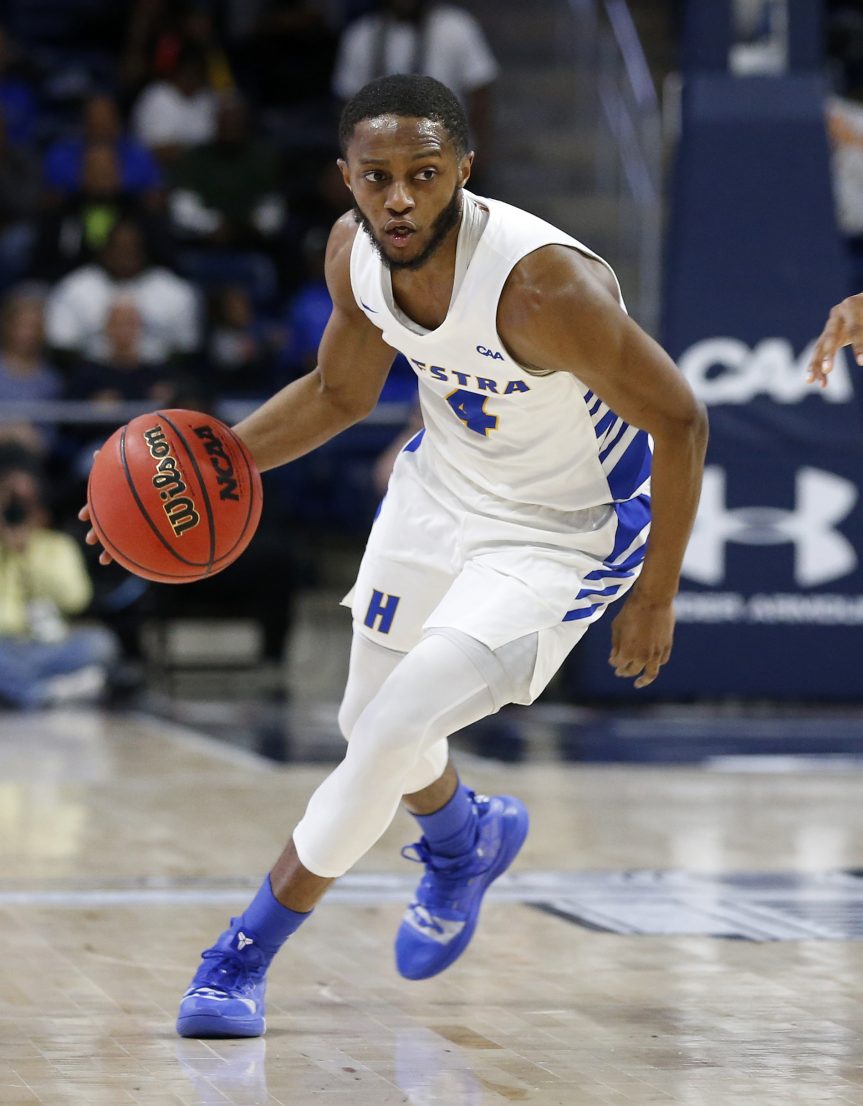 WASHINGTON – The Colonial Athletic Association (CAA) tournament descended on the Entertainment and Sports Arena once again for a pair of semifinal games between Hofstra University and the University of Delaware and Northeastern University and Elon University on Monday night.

“Doesn’t matter who’s playing, it’s a battle, it’s a war,” Hofstra head coach John Mihalich said. “I saw it all the time (and) this league is such a great basketball league, and tonight was exactly what I’m talking about, just two teams battling out, nobody quitting, tough, tough win, hard-earned win.”

The first game was between Hofstra, the No. 1 seed in the tournament, and Delaware, the fifth seed. The Pride outlasted the Blue Hens, 75-61, thanks to their hot shooting and suffocating matchup zone defense. The Pride scorched the nets with 12 3-pointers while holding the Blue Hens to shooting 42.4% from the field.

“We gotta team full of shooters,” Hofstra guard Eli Pemberton said. “That’s just how we play. You gonna let us shoot, it gets dangerous.”

Four players led Hofstra in the scoring department. Pemberton led all scorers with 24 points, Jalen Ray scored 19 points and four assists, Tareq Coburn contributed a double-double with 13 points and 12 rebounds, and Desure Buie finished up the list with 10 points.

Deleware faced an uphill battle all night, being down by double-digits following an 8-0 Hofstra run early in the first half. The resilient Blue Hens did not allow an early deficit to destroy their confidence, taking their last lead of the game when they responded with an 11-0 run and took a one-possession lead when Mutts hit and up-and-under layup despite fumbling the pass and being fouled.

Hofstra methodically started to move the ball around the court in San Antonio Spurs-like fashion, passing up good shots for great shots, forcing the Delaware defense to scramble as Hofstra consistently managed to find open shooters in the corners or on the wings.

The result, a 13-0 run that the Pride never looked back on. It also did not hurt that the Blue Hens were forced into a scoring drought for nearly five minutes.

More hot-shooting and displays of swagger ensued as the Pride crept away from the Blue Hens.

The lead grew to as much as 22. More than halfway through the second half after Pemberton made Delaware pay for going underneath screens and rolls, and then he knocked down a 3-pointer. Pemberton immediately proceeded to mean-mug his bench in celebration. However, the resolve of Delaware never wavered despite the growing deficit.

“Tip your hat to Hofstra,” Blue Hens head coach Martin Inglesby said. “I thought they played really well, especially in the first half. They got very confident on the offensive end. Any time we had a breakdown, they really made us pay.”

The Blue Hens took things up a notch while they cut the deficit to just eight points and outscored the Pride 19-5 during the final seven-minute stretch. Delaware turned to a fullcourt press defense, forcing Hofstra into turnovers while they attempted to inbound the ball and double-teamed guards if they did at all.

“We kinda got off, they messed us up,” Pemberton said about Delaware’s late defensive play. “Once we got to a timeout, we kinda just had to calm down, we just had to take our time. Just slow down, they were speeding the game up for us, but we knew they weren’t going anywhere.”

Cutting the deficit to single-digits was all that Delaware had left in them. Ray, Corburn, and Pemberton finished the game at the free-throw line while dissuading the Blue Hens from taking any shots from beyond the arc.

The second game was a 68-60 Northeastern victory. Jordan Roland led all scorers with 21 points, followed by 16 points from Bolden Brace and seven rebounds, and 10 points from Tyson Walker. Elon was led by Hunter McIntosh and Marcus Sheffield, who both scored 20 points, rounded off by 10 points from Federico Poser.

“I thought our defensive energy to start the game really set the tone for us. Allowed us to get out in transition and get our confidence going, and I think that’s always big to get us off to a good start, “head coach Bill Coen said.

Elon head coach Mike Schrage summed up day 3 of tournament play as the day where everything hits you physically and mentally. The thoughts Schrage admitted to having certainly seemed to come into reality as the Huskies ran out to a 20-point lead after a Rolan 3-pointer with just over three minutes left in the first half.

“We’re a no-excuse program,” Schrage said. “and the second half and so much of the rest of the game you didn’t see that. These guys kept fighting, had amazing resilience like they’ve had all season.”

The Phoenix seemed to wake up, and the adrenaline started to pump in the last 20 minutes.

While Elon played as if they had nothing to lose and their pride on the line, Northeastern seemed to play to maintain and not go for the jugular to earn a statement win and send a message to Hofstra.

The Phoenix even closed the deficit to single-digits when McIntosh nailed a second-chance 3-pointer late in the second half. Roland responded with his own 9-2 run and helped to restore momentum in the Huskies favor.

The Huskies and Pride face off for the CAA championship tonight.