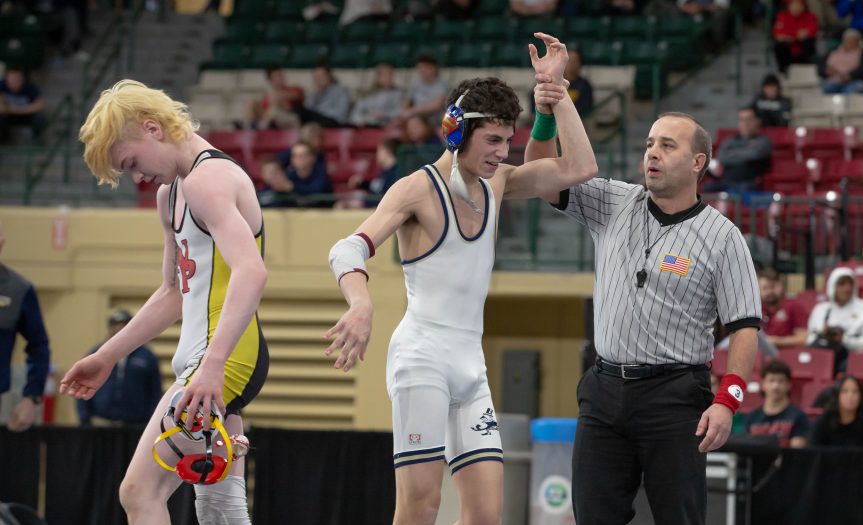 Prince George’s County had one finalist in 138-pound senior Jaron Fernandors (40-2) of Fairmont Heights, a two-time county champion whose Class 2A-1A runner-up finish was an improvement on having placed fourth as a junior. Fernansors lost in a valiant effort, 4-2, to repeat state titlist Maximus Bentley (34-2) of Easton, who had pinned his previous three tournament rivals.

Kresslein (49-2) was dethroned as county champion by senior Jaedyn Harris of Gaithersburg after winning the county and region; he finished third at states last year.

However, Kresslein bounced back to win his state title bout, 6-4, in overtime over previously unbeaten Dustin MacDonald (34-1) of Mountain Ridge to avenge a 14-7 Class 2A-1A West Regional championship loss of a week earlier.

“Zack would be proud, and he was undoubtedly a driving force in my ability to push through obstacles,” said Kresslein, whose other tournament wins were by 35-second fall and decisions of 3-2, and, 5-2 over junior third and fourth-place finishers Jake Rallo (45-2) of Sparrows Point and Micah Bourne of Stephen Decatur.

“It feels great because of how much work and effort I have put in these past few months and years with one goal in mind. The feeling is incredible.”

A four-time county title winner who has thrice won regionals crowns, Furgeson scored his third tournament fall at 2:41 of his title bout against Woodlawn sophomore Justyn Briscoe, running his winning streak to 95 consecutive matches with his single-season victories surpassing last year’s mark of 45-0.

“Adam Pfeiffer is a really good wrestler, and I knew if I won all of the positions that I would be in good shape, so I focused on that,” said Furgeson, a linebacker on the Swarmin’ Hornets who has signed to play that sport on scholarship at Villanova University.

“It’s been a blessing to wrestle for the coaches at Damascus. They really have helped me to become the man I am today. It was really exciting to finish my career with a pin in the finals, and I’m really proud of Aiden and Michael. I have seen how hard they worked and it has paid off. I will also be wrestling in The Dapper Dan Classic in Pittsburgh on March 14.”

A third-place state finisher last season, Beall (48-3) sandwiched a pair of falls around a 13-2 decision in the quarterfinals before edging Northwest senior Yoann Olympio, 5-3, in the championship bout. Beall overcame Olympio (31-5) for the third-straight week, having pinned him in the county finals before finishing him, 7-2, at regionals.

“Last year, I placed third, and I knew I didn’t put in enough work to be at the top of the podium and that’s what motivated me in the offseason and during the season to constantly get better so that I could become a state champion, so so it’s a great feeling to end on top finally,” said Beall.

“Going against Olympio was fun. Each time I got on the mat with him, I didn’t exactly know how it was going to turn out. Luckily, I won each time we faced each other, but he was a difficult opponent with his explosive double-leg. I had to constantly be on my toes, but he also couldn’t stop my offense, which led to the victory. It was so disappointing losing last year that I wouldn’t let that happen again.”

Emerick (50-3) earned his first county and regional titles as well as his first state title, this, after having placed second and third at each of the previous state tournaments.

At states, Emerick pinned his first pair of opponents before defeating eventual senior third-place finisher, Armon Nettey (19-2) of Springbrook, 3-0, in the semifinals and senior Caleb Everhart (46-3) of South Hagerstown in the finals.

“After placing second and third the past two years, I knew what it felt like to lose at states,” said Emerick, who defeated Everhart, 4-3, in the regional finals and Nettey for the fourth time in their careers. “It’s always a tougher match when you’re facing someone that you’ve wrestled previously, but I’ve matured in the fact that I wasn’t nervous. Winning this year meant a lot.”

It was a highlight during a season in which the Swarmin’ Hornets lost three times, including twice in one day on Dec. 14 at The Warriors Duals at La Plata High School in Charles County, ending Maryland’s longest-ever winning streak – and the third-longest all-time – at 182.

A fourth-year wrestler who earned his first county and regional titles as well, Sieh pinned his first two opponents in the first period, earned a semifinal 4-2 decision over third-place finisher Jeo Martinez of Bethesda-Chevy Chase, and defeated Huntingtown senior Jackson Cramer, 7-3, in his championship bout to become the Blue Devils’ first state champion since Nadjitade Badje in 2009.

“It feels unreal to say the least,” said Sieh, who “has a 4.3 grade point average, never missed a practice, always works hard, and he accepts coaching extremely well,” according to Blue Devils’ head coach Rob Whittles.

“With only four years of experience, I felt that I needed to prove that hard work is the deciding factor in big matches, not letting lesser experience hinder my goals. But all of the success comes from the Springbrook atmosphere. It truly is a family with support and encouragement from coaches, parents and teammates.”

“From Day One as a freshman, Sayfore has done everything the right way as a person and wrestler. When he started wrestling, we knew that he could become special, despite not having any wrestling experience coming into high school because he paid attention and was very committed from the start, said Whittles.

“He wrestles with our stable of other talented middle-weights every day, as well as Coaches Matt and Chris Halkos, and they all work to push each other to be the best that they can be. Sayfore would ask questions if he couldn’t figure out how to score in a certain position, and he would always listen to whatever our coaches would tell him.”

In the state dual semifinals, the Blue Devils avenged an earlier loss in the semifinals, 34-30, over previously unbeaten county neighbor Bethesda-Chevy Chase.

Martinez was beaten three times this season by Nettey, including once by fall, and Ditmars later won the Anne Arundel County title. Guttentag (46-2) pinned three opponents before earning an overtime, 5-3 victory over junior Kielen Huff (40-4) of North Point, with his semifinal fall coming against state champion Eric Liau, who finished fourth.

Guttentag had edged Liau, 4-2, in the county finals, this a year after Liau had gone 41-0.

“Obviously beating Eric Liau once is awesome, but beating a wrestler and competitor of his level twice is quite an accomplishment, and I’m just really glad that I stuck to my game plan and that everything worked out,” said Guttentag.

“The finals match was a little closer than I would have liked, but I got my hand raised and made it a little dramatic with the overtime victory.” Guttentag’s eldest brother, Eli, was a state runner-up before graduating in 2019, and Drew, a junior, was sixth at states on Saturday. “It’s amazing to be a state champion. I’m still in shock and disbelief. It hasn’t quite sunk in yet,” said Guttentag.

Jason made up where his sibling left off, defeating county champion Chris Simpson of Bethesda-Chevy Chase, 21-13, in the title bout after having sandwiched a pair of technical falls around a quarterfinal, 13-1 decision. “Eric’s record was 41-0 last year, and mine was 40-0 this year.

He’s bragging because he has one more win during the undefeated season,” said Jason Liau, who handled Simpson, 17-6, in the regional finals a week earlier.

“I am very proud of being a state champion and being undefeated like Eric last year. He let me have the lighter weight class this year, so we’re both state champs and have our names in the wrestling yearbook. Next year, I hope we both can be state champs at the same time.”

Righter pinned his way through the county, regional and state tournaments, planting Reservoir senior Dylan Altman (35-2) at 3:57 of their title match.