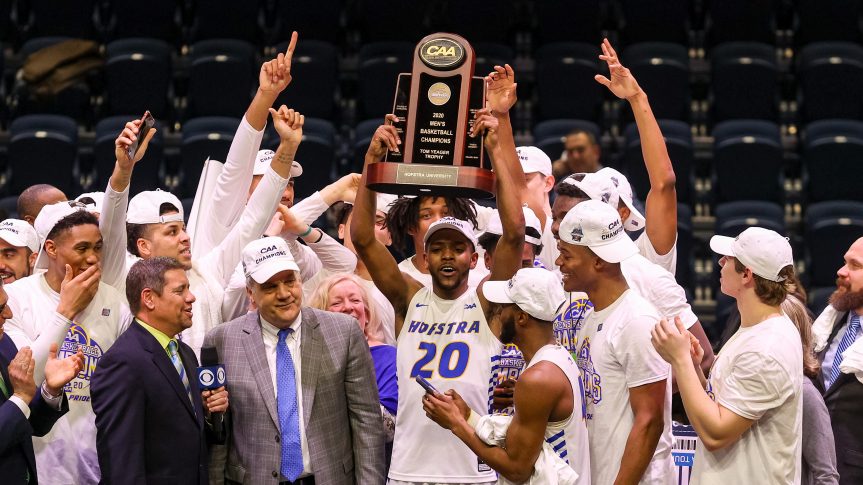 That’s all Desure Buie, and Jalen Ray could think of after Hofstra won the 2020 CAA championship on its third attempt since 2016 to lift their team to a conference championship, punching their ticket to the NCAA Tournament for the first time since the 2001 season.

“This feeling, it’s everything,” Ray said. “This has been our mission from day one and last year, and this time we completed our mission.”

Buie said that the current Boston Celtic was a role model, and his improbable run to the national championship was an inspiration to play in the tournament one day.

“I just wanted to be apart of something special,” Buie said. “I wouldn’t trade these guys for the world. They mean everything to me; they push me every day to be better. I’d go through a wall for any one of these guys.”

Buie led all scorers with 20 points five rebounds and five assists, Eli Pemberton followed up with 19 points and seven rebounds, and Ray finished with 17 points and eight boards to lead Hofstra.

For a long time, the tight contest between the championship contenders seemed like it could go either way. It was the type of contest you’d expect to see from the two after just single digits decided their season series in a Hofstra sweep.

Northeastern was methodical in their approach, taking their time to score and often going inside to do so.

On the defensive side, the Huskies made a decided effort to muck the game up for Hofstra, not allowing the Pride to create openings by swinging the ball for outside shots. As a result, Hofstra was forced to play the mid-range and inside, taking quick shots and getting minimal second-chance opportunities.

“They’re hard to score against,” head coach Joe Mihalich admitted, “It’s a trademark at Northeastern and something that we admire. We’re polar opposites. They play good tough man-to-man, they don’t let you use ball-screens, they’re physical. We play zone for 40 minutes, and they both work.”

After being down by as many as eight points and with Hofstra looking unsure of themselves during a media timeout with just under seven minutes left, Ray gave the Pride a boost with back-to-back 3-pointers to give Hofstra a four-point lead.

Moments later, Buie’s six-point swing off a completed and-1 and a 3-pointer helped Hofstra reel off a 7-0 run. The decisive run helped the Pride than outscore Northeastern 16-9 in the closing minutes, including Buie’s back-breaking 3-pointer that brought the deficit to 10-points in Hofstra’s favor.

“This brotherhood, it shows a lot about this team,” Pemberton said. “How we fight for each other, all the downtimes of the season, to the times that we’re up right now, we definitely would run through a wall for each other. We move as a clique, 14 of us, I think that’s the reason why we’re here today.”