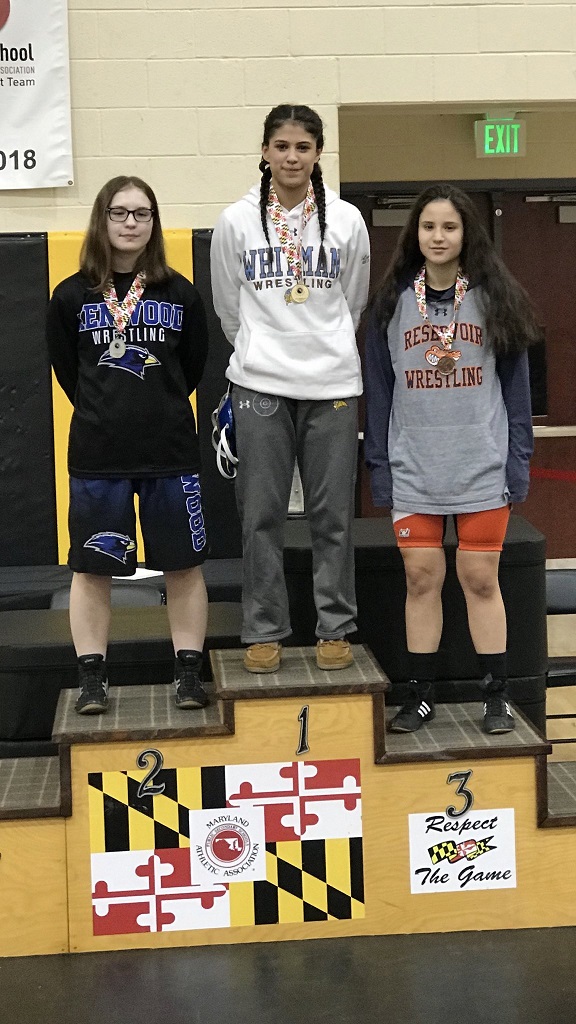 UPPER MARLBORO – Walt Whitman High School senior Stephanie Solloso was within 20 seconds of accomplishing her dream of winning a second consecutive girls wrestling title in three championship appearances – if not losing it.

Down by a point against senior Julia Fitzpatrick of James M. Bennett High School in the 127-pound finals of the inaugural Maryland Public Secondary Schools Athletic Association’s (MPSSAA) state championship tournament at The Show Place Arena in Upper Marlboro on March 6-7, Solloso was competing two years after a runner-up finish in the first annual girls’ invitational folk-style event and following a 127-pound title-winning performance in last season.

“I was down by one point [11-10] within the last 20 seconds,” said Solloso of the females’ first officially sanctioned state championship, which was contested simultaneously alongside the boys.’ “I realized that I had to do something or else I was gonna lose.”

Solloso scored a buzzer-beating takedown for a dramatic 12-11 decision, having reached the finals on pins in the first and second periods.

“I got my two points for the takedown in the last second,” said Solloso, who ended the year with a 7-2 record. “This feels great and provides me with quite a memory to be able to be at and to win an official state tournament. I’ll be able to brag about this to my kids.”

Heath pinned all three of her opponents, including Smithsburg High School freshman Allie Grosnickle at 4:51 of their final, and Gong required two falls, the last at the 2:36 mark of her title match against Quince Orchard High School junior Becca Soto.

Estrada decked senior Ogechi Nwughala at 2:47 of their championship bout after having won her two previous matches on tough decisions of 12-10 and 4-2.

Solloso’s older brothers wrestled for Whitman coach Derek Manon, with Anthony graduating in 2014, and Marcos, in 2016, after being a regional runner-up.

“Marcos had a motor that was unmatched,” said Vikings’ coach Derek Manon. “He won The Grapple At The Brook [at Springbrook High] as a senior.”

Marcos was mat-side for at states for his little sister, said Stephanie Solloso.

“My older brother Marcos was on the sidelines, coaching me, and recording my match. He’s always been there, and he’s made it clear on just how proud he is of me,” said Solloso, who pinned senior Brooke Markell of Baltimore County’s Kenwood High School in 2:38 of last year’s state championship match.

“My brothers were the only reason I started on the mats. Watching their matches when I was in seventh and eighth grade made me want to be out there wrestling the guys they were up against…I would get anxious and be stressed from just watching. But during my freshman year, I ended up going to the first practice, and I’ve loved it from the first day.”