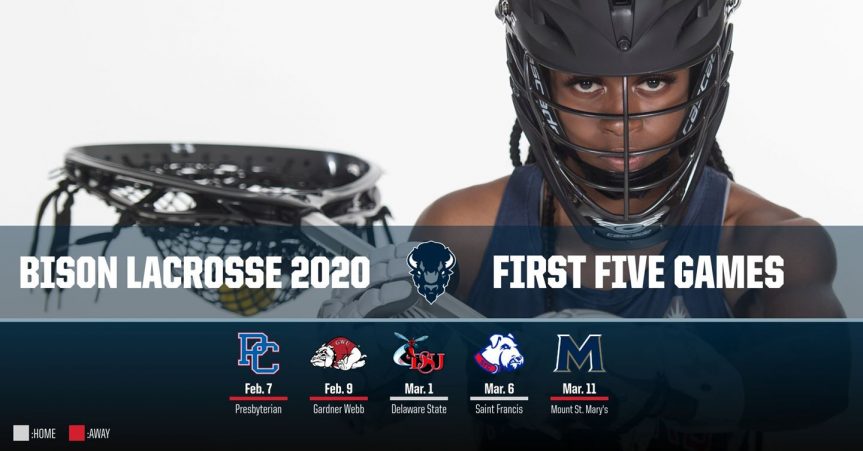 However, the program has undergone a few changes this season, now under the direction of interim head coach Paul Bowden and with several new additions to the roster.

HU remained hopeful that this season will be the year it picked up its first win in two years. It was on March 8, 2018, when the Bison hosted the University of the District of Columbia and won convincingly, 17-7. Since then, Howard has lost 30 consecutive games that included an 0-14 season in 2019 and 0-5 start to the 2020 season.

All of HU’s spring sports competitions have been canceled due to ongoing coronavirus concerns, bringing the women’s lacrosse season to an abrupt end. The Howard athletic department has taken the measure to ensure the safety of all participants, staff, and spectators.

As the Bison were in somewhat of a rebuilding phase, Bowden has taken the responsibility of turning the program around. He said he has tried to instill commitment, passion, discipline and self-awareness in his group of student-athletes.

“All I’m trying to do this year is get better every day,” Bowden said.

Of the 28 players listed on the roster, 14 of them are freshmen, making Howard one of the younger teams in the Atlantic Sun Conference (ASUN). Bowden considers this year’s incoming group of players the “foundation class” and believes that Howard will see unparalleled growth when it hires a full-time coach at the end of the season.

“The former coach brought in this class to say ‘OK, this is when we’re gonna change,’” said Bowden, a Baltimore native and associate athletic director of student services.

Howard is only one of three Division I HBCUs with a lacrosse program. The others are Hampton and Delaware State. Before their season came to a sudden end, the Bison’s chemistry and confidence was developing.

“I’ve been playing lacrosse for a while now, and both of my parents came to this school, so I’ve always had an eye on it,” said Sydney Kates, a freshman midfielder from Cleveland. “I had an opportunity to play for this team, and I didn’t want to take it down, so here I am, and I’m enjoying myself.”

Along with Kates, two other freshmen – midfielders Quai Skeete-Ridley and Josie Mallory – reflected on how HU embraced their identity and uniqueness as a team.

“When I visited here, I felt like I was with family. It didn’t feel awkward or weird, so I knew that this was home,” said Skeete-Ridley, a former St. Vincent Pallotti standout. The 5-foot-8 draw specialist said she felt her role was to make a difference in the program and bring a name to Howard lacrosse.

“I know my role is to be a leader on and off the field even though I am a freshman. I noticed that people are watching me at all times, so I need to be positive and to encourage toward my teammates,” she said.

In five games, Robey was on a tear leading the Bison in goals (8) and points (10), and fellow freshman Skeete-Ridley scored seven goals and led the team with shots on goal.

The team was beginning to discover each other’s strengths and weaknesses, and Mallory said she and her teammates were on their way to breaking the 30-game losing streak this season.

“If we keep putting our minds to it, then we can do anything we want to,” said Mallory, a health science major from Charlottesville, Virginia.

Lailah Robey, one of the team captains, was part of the program when Howard picked up its last win in March 2018. The 5-foot-4 midfielder and attacker has cherished her leadership role and said the Bison were more than capable of winning this year.

“As a whole, I think that we’re starting now more than ever to be able to analyze the field and our space and the people around us, and use it in the most ideal way,” said Robey, a junior.

“We have a good reputation, but just as far as our scoreboard and our stats, it doesn’t reflect who we are as a team.”

Robey has one season left on the field, and one of the ways she said she hopes to leave a mark on the program is to surpass alumna Natia Warren in draw controls. Warren, a former midfielder, totaled 176 draw controls over her career. Robey currently has 51.

After being sidelined due to being medically disqualified, Hunt decided to remain attached to the program. Since being a 2018 walk-on, Hunt has seen the program evolve while forming an inextricable bond with teammates and coaches.

“Because I am no longer able to play, I still wanted to be as active as I could be on the team and be able to really provide for my teammates since I could no longer provide for them on the field,” said Hunt of her integral role in the program.

“From doing that, I tried to basically use my skills that I use in my career on an everyday basis and apply it to how I could expose Howard women’s lacrosse program more.”

The Bridgewater, N.J., native has a deep-seated passion for the lacrosse team and is partially responsible for the ‘rebranding’ of the team’s image with endeavors to bring more publicity and exposure to the program.

She, too, reflected on the uniqueness of Howard’s women’s lacrosse team.

“I think the team that’s on the field is a better team. They have higher lax IQ. I think they have the potential to change Howard lacrosse,” Hunt said.

With the growing popularity of lacrosse among Black athletes in the D.C. metropolitan region, Bowden feels Howard is the perfect place for talented female lacrosse players to come and showcase their talents while contributing to the legacy of one of the nation’s most historic HBCUs.

“It’s a great sport to have at an HBCU because…not many young African American female students are playing it, but more and more are starting to play it, so they need a place to go and play,” Bowden said. Howard could be that place.”