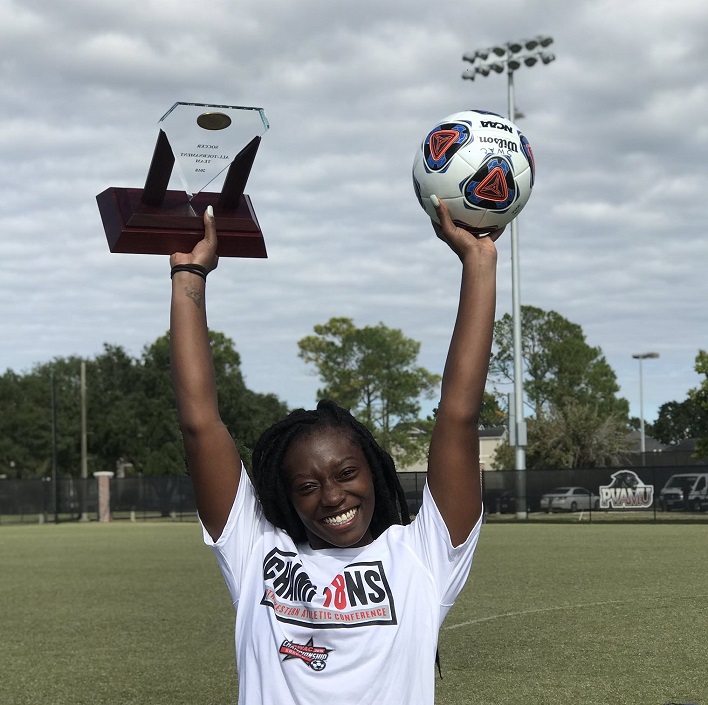 By The Sports Pulse

WASHINGTON – Howard University junior broadcast journalism major Tiffany Hunt caught up with her women’s lacrosse teammate Alayah Hightower (Mitchellville, Md.), who is also was a member of the women’s soccer team, and asked 10 questions for the 2019-20 Senior Profile series.

Q: What’s your favorite part of being a two-sport student-athlete?

A: I get to meet double the number of friends and experience two different dynamics between each team.

In soccer, I just love being the goalie because I like how the team depends on me.

With lacrosse, I love the sport because I self-introduced myself to it and learned the fundamentals of the game. I ended up loving the sport, finding myself within it while hanging out with my teammates.

Q: How did you get started in soccer and lacrosse?

A: In soccer, originally, my parents always wanted me to run track, but I was slow. So, my dad eventually put me in soccer and that’s where my love grew from there. I never ran track again.

In my physical education class during the sixth grade, lacrosse was part of the rotation throughout the different sports we played. The following year, I decided to play, so I went out to play lacrosse and soccer on my middle school teams.

Q: What kept you motivated?

A: My teammates because they were encouraging and supportive. We had each other’s back.

Q: If you were not competing in soccer or lacrosse, what other sport would you do?

A: I think I would want to play volleyball because I played the sport during my physical education class. I would be extremely competitive.

A: Lebron James because he’s an outstanding player and a champion. He’s a beast and dedicated to the game.

A: I would say winning the SWAC (Southwestern Athletic Conference) Women’s Soccer Championship in 2018.

A: After graduation, I plan to get my MBA (Master of Business Administration) through Howard’s School of Business.

A: I will miss my teammates and the athletic administration. But don’t worry, I’ll be back.

Q: What advice would you give future Bison?

A: My advice is to don’t give up. You may go through some tough times, but if you are persistent, you will get it done.

Before her arrival to The Mecca, Hightower was a four-year letterwinner from Severn School where she was a member of the National Honor Society.

In her collegiate career, the two-sport student-athlete won numerous accolades on and off the field. Hightower earned the 2019 SWAC Goalkeeper of the Year after guiding the women’s soccer team to a regular season title. Last year, she was a member of the 2018 SWAC Tournament Championship team that appeared in the NCAA Tourney.

She saw action in 19 lacrosse matches, including five starts this season before the year came to a halt due to the Coronavirus (COVID-19). In her final collegiate match against Mount St. Mary’s (March 11), Hightower produced a hat trick (three goals) versus The Mount.