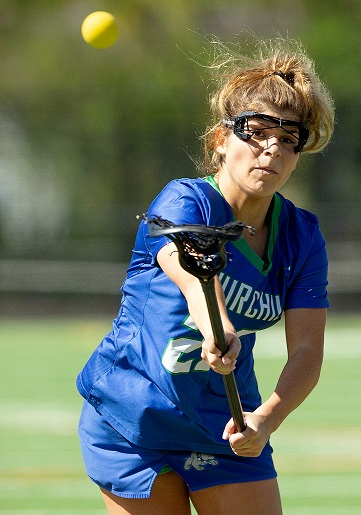 ROCKVILLE – When Utah Jazz center Rudy Gobert was diagnosed with COVID-19, a.k.a, coronavirus, on March 11, the NBA immediately suspended its season, which led to a ripple effect of suspensions among professional sports leagues and cancellations of college sports, including the NCAA basketball tournaments.

The coronavirus outbreak in our country also led to high school sports being postponed, with many student-athletes being affected.

One spring athlete whose season has been postponed is Leah Rubino, a senior at Winston Churchill High School who plays lacrosse and committed to playing at Butler University.

“I’m really disappointed that I’m not playing lacrosse right now,” said Rubino. “I was excited to start my senior season, but now I’m missing out on my last year of high school lacrosse.”

In addition to lax, Rubino was also on the Bulldogs’ girls basketball team, which made an incredible run in the playoffs and reached the state semifinals, only for that round to be postponed due to the pandemic.

“We worked extremely hard all season just to be stripped of our reward,” said Rubino. “We had a great season on and off the court, so it’s a shame that we didn’t get to end it properly.”

In the meantime, Rubino has been working out and practicing with her siblings at home. One of her siblings is former Churchill lacrosse player Jimmy Rubino, who graduated in 2018 and committed to playing at the Naval Academy.

“I have to try and stay in the best shape I can so that I can try to be competitive when I get to school,” said Rubino. “We also trained at the gym Healthy Ballers before it was closed as well.”

Another senior athlete who may not get to play for a while is Luke Trythall, who plays baseball at Poolesville High School.

“I feel that this delay is definitely necessary,” Trythall said. “But the players that are going to do well this season will find a way to keep working out and keep getting better. I think this season will separate the good players from the great players.”

Trythall has committed to playing baseball at UMBC, as he feels excited to return to the diamond.

“Being able to enjoy my senior season after committing is something I am looking forward to very much,” said Trythall.

Sherwood baseball head coach Sean Davis has led one of the best teams in the county, though his players are not happy with the current scenario.

“It’s more so a disappointment for the players,” Davis said. “When they first announced the postponements, you could feel the players were upset. They had a pretty good team. I’m not worried as much as them, though.”

“This should be one of the most exciting moments of their lives, and now they’re forced to sit at home,” said Davis. “I feel bad for the seniors. They haven’t canceled spring sports, but there’s a small glimmer of hope. Though Virginia canceled school.”

In the meantime, Davis is doing what everyone else in the nation has been advised to do.

“I’m just staying home,” said Davis. “I’m at home with my wife and kids, making sure they get their academics.”