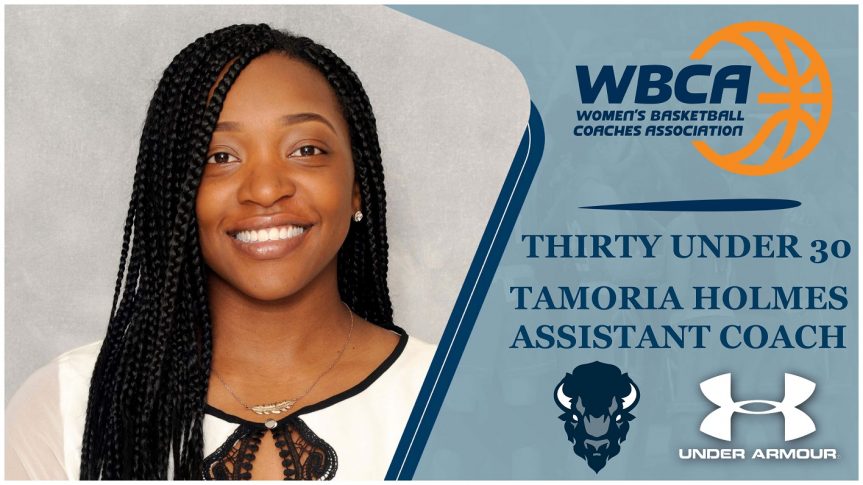 ATLANTA – The Women’s Basketball Coaches Association (WBCA) recently unveiled its Thirty Under 30 class presented by Marriott Bonvoy and Morgan Stanley Global Sports &Entertainment, for the 2019-20 season where Howard University assistant coach and recruiting coordinator Tamoria Holmes was among the honorees.

The WBCA Thirty Under 30 program was created to recognize 30 up-and-coming women’s basketball coaches age 30 and under at all levels of the game. Each honoree has exemplified their involvement in community service, mentorship and impact on others, professional manner, and attitude and professional association involvement.

“Wow, I am extremely humbled by this recognition from the WBCA,” Holmes expressed. “This industry can be tough at times, but I am honored that my hard work and perseverance hasn’t gone unnoticed.”

“I am extremely proud of Tamoria [Holmes],” said Howard women’s basketball head coach Ty Grace. “She is a hard worker and loves the game. She instantly impacted the lives of our student-athletes.”

Holmes was a four-year letter winner and two-year captain for the Howard women’s basketball team (2009-13). She helped guide the Bison to the MEAC Tournament championship game three times in her collegiate career. After the 2011-12 campaign, she was named to the All-MEAC First Team after leading the conference in scoring with 18.3 points per game.

“The WBCA is pleased to recognize up-and-coming talent in our coaching family,” said WBCA Executive Director Danielle Donehew. “These coaches have demonstrated eagerness, effectiveness, loyalty, love of the game, and a commitment to the student-athlete. We celebrate their effort on the basketball court as teachers and equally applaud the extensive role
they play in impacting the lives of their student-athletes.”

The North Carolina native is a member of Howard’s 1,000-point club, earning her bachelor’s degree in health science in 2013.

“She is an up-and-coming coach in this business,” Grace added. “We are lucky to have her back at Howard, a place she accomplished so much as a student-athlete and now has an opportunity as a coach. She is a coach on the rise.”

This is the fifth year of the WBCA Thirty Under 30 program.