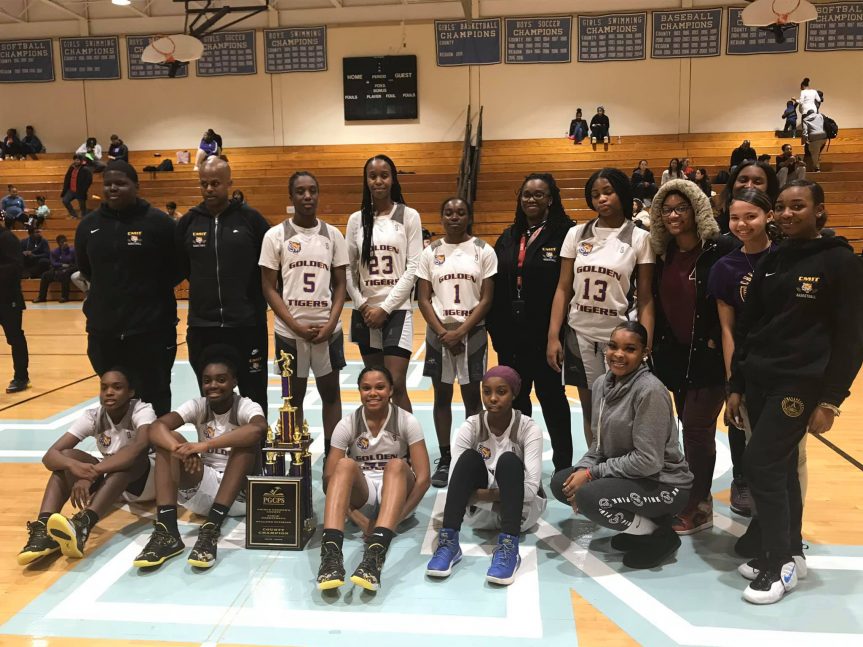 HYATTSVILLE – For the Chesapeake Math and IT (CMIT) Academy North High School girls basketball team, the 2019-20 season was its coming-out party.

The Tigers, who have dominated the charter school conference in Prince George’s County for the past two seasons, showed the progress of their program with dominating wins over some of the area’s best, leading them to a 24-1 record and a berth to the Maryland 1A state semifinals. The Laurel-based squad now waits for the chance to show their talent at the highest stage.

CMIT-North garnered attention for their large margin of victory of their charter school opponents. One example occurred in the state playoffs, where they defeated College Park Academy 100-3 for their first regional title. However, according to head coach Abdi Mohamed, his unit’s strengths is their maturity and time-management skills with their schoolwork in a charter school program.

“We got older,” Mohamed said. “Last year, we had four freshmen and one sophomore starting, and now, we have one junior, three sophomore and one freshman starting. So, we got older; we got better. Last year, we had freshman playing varsity right away, and playing summer basketball help us out a lot, so they knew what the expectations were and what to look for.”

Most of the players have come up together through Mohamed’s program in middle school, which built chemistry to create the Tigers’ up-tempo offense. Players like sophomore guard Zanai Barnett-Gay took a giant leap, Mohamed said, as her offensive play elevated her not just to a leadership role on the team but to the 1,000-point plateau for her high school career.

“It is good that we finally get the recognition,” Barnett-Gay said. “We have been so good for so long, and it is so good to be finally be seen.”

After losing to Meade on Dec. 11 in their third game of the season, the Tigers went on a tear, winning the next 22 games in all competitions. Their victories did not only come against charter school competition either as they took down Banneker of Washington D.C. and defeated Our Lady of Mount Carmel of Baltimore in the Title IX Tournament.

Meanwhile, against PGCPS teams outside their division, CMIT-North finished the year going 3-0, including earning a 64-47 win over 4A powerhouse Eleanor Roosevelt during the She Got Game Tournament on Dec. 14.

Guard Afia Owusu-Mensah, who was named to the 2020 All-County First Team, called the upset the best game they played all season.

“We have been trying to play Roosevelt for a while,” Owusu-Mensah said, “I guess they did not want to play us because they did not think we were any good, but this year, we got to play them in the She Got Game tournament, and we knocked them out.”

Following their regional title win, the school community rally around the Tigers as they defeated Snow Hill, 77-27, on Mar. 6 in the state quarterfinals, qualifying for a trip to the semifinals at Towson University against Coppin Academy of Baltimore. More than 75 students bought tickets, and the school ordered buses to take everyone to the game.

However, following multiple rescheduling and rule changes, state high school athletics officials elected to postpone the game indefinitely due to the coronavirus, known as COVID-19.

“It is kind of disappointing; we worked all year to get here, and we have a chance to play right now,” Barnett-Gay said. “I think it was necessary, but I don’t really like it.”

The stoppage in the road to a state title has only fueled CMIT-North to continue building towards their goal, Mohamed said. Players continue to text him their workout plans and ask for ideas to stay fit as they wait for the final decision by state officials.

Meanwhile, as they prepare for next season, the Tigers have begun reaching out to more public school teams in the county to face off against in their non-conference schedule. Both Barnett-Gay and Owusu-Mensah named multiple programs but understand that they will be the underdog in those games. It is a spot that they are used to and ready for the next challenge.

“Everybody knows now that we are a good basketball school,” Owusu-Mensah said. “We can compete with anybody in the state; we are not scared of any team.”