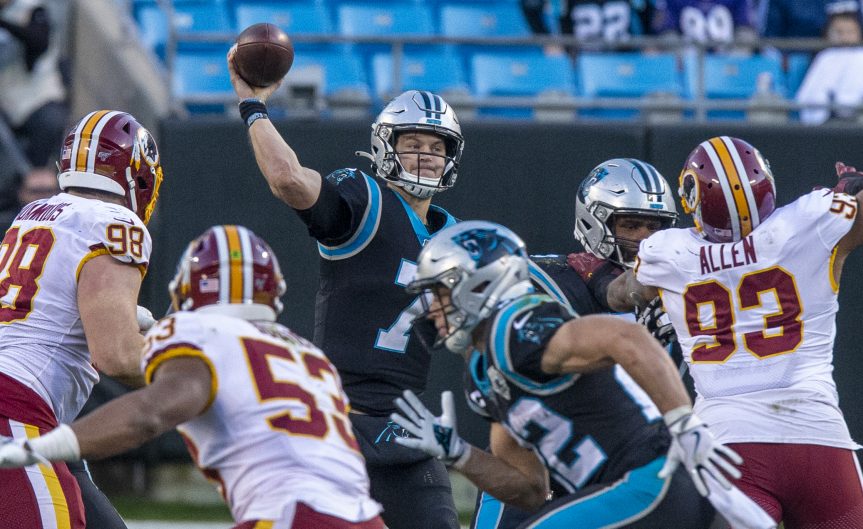 The two played under Rivera while he was the head coach of the Carolina Panthers. On New Year’s Day, Rivera was hired as Washington’s head coach. Throughout the eventful NFL free agency signing period, the Redskins made several adjustments to bolster their roster heading into the 2020 season.

Davis and Allen expressed their excitement reuniting with Rivera along with expectations in Washington.

“It’s definitely going to be exciting reuniting with Coach Rivera, I understand how he likes to operate, how he likes to do things and what he expects of us as players,” Davis said.

“It’s a lot different playing for Coach Rivera because he’s a guy that played the game. Whenever you play for a coach that played the game, they understand what guys are going through. They listen more, and they adjust the schedule more, they understand that at any given point in the season it’s not about tearing guys down, it’s about uplifting your players and that’s something that Coach Rivera has been really good at.”

The 37-year-old is approaching his 16th season in the NFL and feels obligated as a veteran to mentor younger teammates and lead by example. By doing so, Davis believes he can help Washington’s talented roster play to its maximum capabilities.

“When I first came into the NFL I had a bunch of veteran players that definitely did a great job of showing me the way, so here I am going into my 16th season, and it’s all about giving back and pouring into the lives of these guys and getting the most out of them,” Davis said.

On March 17, Davis signed a one-year deal with the Redskins. Rivera and Davis spent eight years in Carolina and made a Super Bowl appearance in 2016.

Allen played his first two NFL seasons for Carolina after being signed as an undrafted free agent by the franchise in 2018.

On March 10, Carolina announced that it signed Allen to a one-year contract reportedly worth $585,000. However, the 24-year-old soon learned of a change of plans on his way home from a workout on March 23.

Allen received a phone call that he was being traded to Washington, where he would not only join Rivera again but was reunited with Redskins offensive coordinator Scott Turner, Carolina’s quarterbacks coach for the 2018 and 2019 seasons.

Quarterback Dwayne Haskins and Allen will likely compete for the starting spot.

“When they traded for me, it was kind of random. I didn’t push to be traded, and I just signed a contract in Carolina two weeks before. Interesting experience, but just talking to the coaches and talking to Ron [Rivera], and I think the expectation is to come and compete for the job,” Allen said.

“I think it’s an awesome opportunity, and I think it’s cool to be back with the coaches who run a similar system. So, we’ll see and I’m going to take advantage of my reps. In Carolina, when I was the fourth string two years ago and got three reps in training camp. Now with more reps, I’m taking advantage of them.”

The Scottsdale, Ariz., native said he was able to get in some solid joint workout sessions with New York Jets quarterback Sam Darnold and Buffalo Bills quarterback Josh Allen while remaining mindful of social distancing mandates in the wake of the COVID-19 outbreak.

Davis, a three-time Pro Bowler, spent his first 14 years in league with the Panthers before being traded to the Los Angeles Chargers for the 2019 season. Davis had a productive year in LA before being released from the team on March 13.

Davis said he isn’t sure what his role will be in the defensive system, but will use his knowledge and leadership qualities to contribute in the best way possible.

“I don’t really know what it’s going to be, there are a lot of things that are going to play out in particularly seeing what happens with the draft, seeing how training camp goes,” said Davis, the 2014 Walter Payton NFL Man of the Year.

Also, Davis said he liked the new playoff rules, which will follow a 14-team format and an extra game as opposed to the 12-team format of the past, in accordance with the league’s new collective bargaining agreement.

“It just makes it more competitive. It adds more teams in, and it allows teams that are hot late in the season like the Titans to be able to make a run, a team that might not normally be in the playoffs, are getting that opportunity, so I like it,” he said.

Allen started 12 games last season after a Cam Newton injury in a Week 2 loss to Tampa Bay and won his first four starts. After the Panthers returned to action after a bye in Week 7, they lost the remaining eight games of the season to finish 5-11 overall.

The 6-foot-3 quarterback said he is ready to take on the challenge that lies ahead and anticipates working with guys like receivers Terry McLaurin and Steven Sims Jr.

Allen is happy to reunite with Davis, and values the leadership the linebacker brings.

“I can’t even tell what year he is, but he’s been in the league for a long time and he understands leadership.”

In 2018, Allen played in two games and completed a combined 20 of 31 passes for 266 yards and two touchdowns. Last season in 13 game appearances, he tallied 303 completions on 489 attempts for 17 touchdowns and 16 interceptions with 255.5 yards-per-game average.