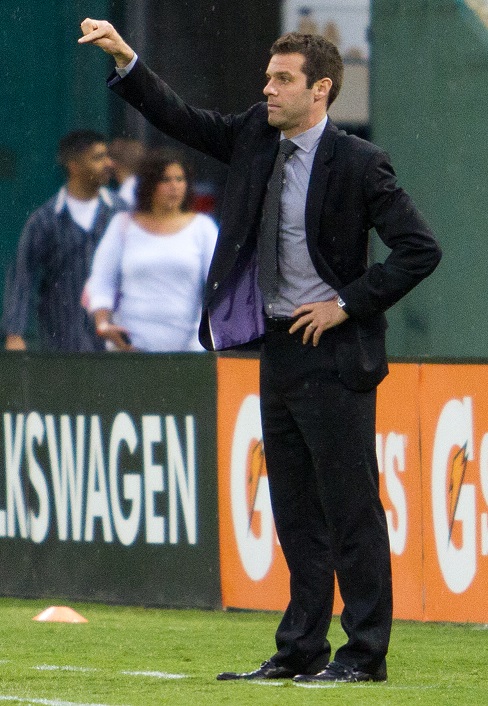 WASHINGTON – D.C. United Head Coach Ben Olsen recalled facing a police officer when attempting to take his three kids to the park. After being inside all day, the former midfielder wanted them to release their energy.

However, the park, along with other public spaces, was closed down as city officials promoted the public to stay home.

Olsen elected to set up an obstacle course by moving the trash cans in the alley behind his Washington, D.C. home. It was part of a new reality living under a worldwide pandemic.

“For everybody, it is an odd time,” Olsen said. “Everybody is dealing with this differently.”

In a wide-ranging, hour-long teleconference call, Olsen shared his thoughts, emotions, and feelings on steering the ship for the Black-and-Red during the league-wide stoppage due to the coronavirus, known as COVID-19.

After earning a 2-1 comeback victory over Inter Miami FC on March 7, United (1-1-0, 3 points) prepared to travel to face FC Cincinnati the following week. However, everything changed on March 11 when NBA player Rudy Gobert tested positive for COVID-19.

Major League Soccer (MLS) announced its decision to stop the season on the following day until it is safe to play. As of Apr. 4, the Center for Disease Control announced that have been 222.205 cases in the United States, with 6,593 people dead.

Since the stoppage, Olsen, his coaching staff and players meet on a weekly video conference, discussing their physical and mental well-being. Analyzing game footage from the start of March was no longer available as players are not able to practice together. Also, some of the team’s new offseason signings, like designated player Edison Flores, are still adapting to the area.

The calls vary, from indoor training methods to social media ideas to engage fans. Stay-at-home orders have limited players’ access to work out while others miss the interaction between teammates. Ultimately, the goal of the conference calls is to keep the team’s chemistry and comradery intact, Olsen said.

While the stoppage has allowed for injured players to heal without missing playing time, Olsen said their recovery process has slowed down. The league set a training moratorium through Apr. 24 that closed all teams’ training facilities to players and coaches expect through requiring treatment or physical rehab.

Defender Donovan Pines (University of Maryland) and midfielder Federico Higuaín stood out in making significant strides before the stoppage. Pines suffered an ankle injury during the preseason. Higuaín, added to the roster in March, was on schedule on his recovery from an MCL tear injury, with his returned scheduled for May.

“Usually, we have our experts with them every day to speed up the healing process,” Olsen said. “That’s not the case now. I give our trainers, doctors, sports scientists, and fitness coaches a lot of credit as of late. They’ve been working extremely hard to come up with the right workouts, right treatments.”

Meanwhile, the break has its benefits for his personal life, the nine-year head coach stated. Once the MLS season starts, Olsen’s time is primarily on training, working with his coaching staff, and packing for road games.

Now, he has had more time to be with his family, joining them on hikes and sitdown dinners. For alone time, he hides to paint at his studio.
At a time where people are losing their jobs – or their lives – Olsen understands his situation.

“I have a job, my family is healthy, and there is food in the cupboards,” Olsen said. “I am very lucky that I am able to do that and focus on being a husband and a father right now in a time where I am usually not a good husband or father.”

The last time MLS experienced a prolonged delay occurred after the 2001 terrorist attacks in 2001. The league canceled the final two weeks of the season and began its playoffs nine days later. This year, MLS started its 25th season on Feb. 29, the earliest start in its history.

Olsen recommended that the league allow a mini-camp before restarting regular-season matches to get players back into playing shape. It may require MLS to play through international breaks as well as having the playoffs and final in late-November into December.

Until the pandemic slows down to allow training to resume, all Olsen can do is check in on his players and be patient.

“We try to control everything, from our diet, training loads, you name it,” Olsen said. “We are constantly trying to control everything so these guys can be at their most optimal levels, and to not being able to do that is a little bit frustrating, but it is out of my control. There is no playbook, and it is a difficult thing to do, but at some point, it is about being healthy.”