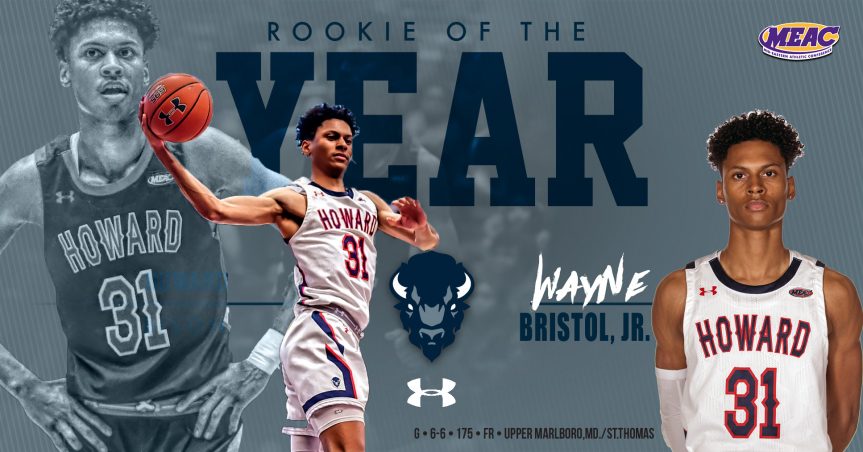 WASHINGTON — Of the last four basketball rookie of the year selections by the Mid-Eastern Athletic Conference (MEAC), three of them have come from the Howard University Men’s Basketball team, the latest being Wayne Bristol Jr.

First-year head coach Kenneth Blakeney said he got acquainted with the freshman standout through his father, Wayne Bristol Sr., who was a basketball star at High Point High School and went on to play for the University of Maryland in the early-to-mid ’90s.

Having a long-established relationship with Bristol Sr. helped Blakeney recruit Bristol Jr. while he was on Columbia University’s coaching staff, said Blakeney, a Washington, D.C. native.

“Wayne was still available when I got the Howard job, and he was one of the first calls I made,” said Blakeney, who returned home for the head coaching role in May 2019 following brief assistant coaching stints with seven other Division I programs.

Bristol said what drew his interest to the Howard basketball program was its history and the prominence of the university. Bristol’s uncle, Walter Bristol Jr., attended Howard, where he excelled academically as a business major.

In the first two games this season, Bristol averaged 11 minutes and only two points on 28.5 percent shooting from the field. The next game, which was played at Notre Dame on Nov. 12, 2019, Bristol rebounded with 14 points on 2 of 3 shooting from deep in 18 minutes.

From there, Bristol’s productivity gradually improved as he began to discover his role in Howard’s system. His minutes increased, and he established himself as an offensive threat and grew comfortable on the defensive end.

“I was very excited,” Bristol said after finding out he was MEAC Rookie of the Year. “I put in a lot of work, and I was happy and honored to receive the award.”

With a 6-foot-6 frame, Bristol has an advantage at his position, making it easier to shoot over most defenders. If Bristol has an open look on the wing, the 3-ball is likely to go in. In transition, he used his length and stride to finish at the rim with relative ease.

More than anything else, Blakeney admires Bristol’s character traits.

Besides leading all freshmen in the conference in scoring with an average of 11.7 points a game, Bristol ranked second in the MEAC in 3-point shooting at 42.6 percent.

“It was a great group of guys that I had on the team that pushed me to get better and to want to work even harder,” Bristol said.

Also, Bristol fought through a preseason shin injury to record 23 double-digit scoring performances in 33 contests while finishing the season as a top-five free-throw shooter in the MEAC, connecting on better than 80 percent of his free throws.

Bristol scored 20 or more points in five games this season, virtually making him a clear-cut favorite for rookie of the year honors.

“He is a workhorse and somebody that’s really dedicated to getting better. Wayne wants to be good and believes he’s good,” said Blakeney, a former DeMatha standout who went on to play for coach Mike Krzyzewski at Duke (1992-95).

“If you kind of couple that with his work ethic and athleticism and his toughness, you have a really good player that’s just scratching the surface.”

Over the past four basketball seasons, three MEAC Rookie of the Year winners have emerged from Howard. In the 2017-18 season, former guard R.J. Cole won after finishing that year, averaging a conference-high 23.7 points per game as a freshman, also leading the league in made 3s (105) and minutes played.

Cole posted a solid sophomore campaign as well and went on to win MEAC Player of the Year in 2019 after leading the conference in scoring for two consecutive years. After two stellar seasons with the Bison, the 6-foot-1 standout transferred and now plays for UCONN.

In 2016-17, Charles “CJ” Williams fostered rookie of the year honors after leading MEAC’s freshmen in scoring with 15.7 points a game. Now a senior, the 6-foot-6 guard from Richmond just concluded his career with Howard as the leading scorer in conference history (2,404 points), a BoxToRow All-American selection, and with all-conference honors.

Bristol played an integral role for Howard his freshman year, starting 25 of 30 games this season and will assume a more prominent role next season. The Bison posted a 4-29 overall record this year, but with Bristol returning as one of the crucial pieces to lead the charge next year, he is optimistic the program is moving in a promising direction.

“None of us expected the season to go that way, so we still worked hard… and we got better as the year went on,” said Bristol, who said he attributes his success to a strong support system: God, family, coaching staff and teammates.

“Yes, I see myself stepping into a bigger leadership role for the team next year to help push for a playoff push. I think next year we’ll be something special, and hopefully, we get farther than we did this year.