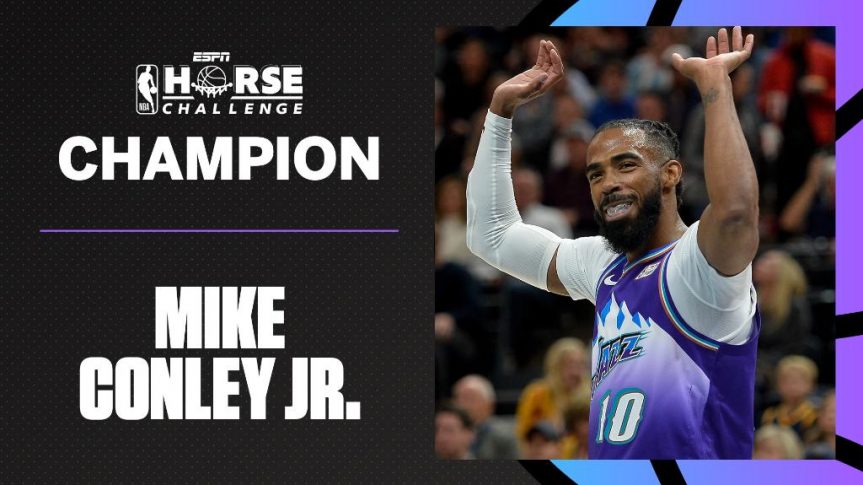 BALTIMORE — The game of HORSE has deep-rooted significance in the sport of basketball, and the NBA decided to showcase the competition to bring the sports world together as the nation faces uncertain times.

The competition began on April 12 with eight contestants composed of current and former NBA and WNBA stars, all of whom competed in a virtual format on their own isolated personal courts due to public health concerns surrounding the coronavirus.

The semifinal and championship rounds were held on April 16, televised on ESPN, and hosted by NBA commentator Mark Jones.

Having the luxury of shooting in an indoor, climate-controlled court was also advantageous for Conley.

On his way to the final matchup against Lavine, Conley bested WNBA Hall of Famer Tamika Catchings in the opening round. The 12-year veteran then advanced to square off against Chauncey Billups in the semifinal, where he sank an over-the-backboard shot, bank shot three, and a trick spin-around three from the right corner to take a quick three-letter lead.

Billups, the 2004 Finals MVP with the Pistons, gave Conley an H with a jump shot off the backboard from the top of the key. Conley, who shoots left-handed and writes with his right hand, responded with a right-handed 3-pointer that gave Billups an H-O-R-S after he missed the same shot shooting lefty.

An underhanded ‘granny’ shot from the free-throw line sealed the semifinal win for Conley. After the loss, Billups jokingly said it was windy at his outdoor court in Denver and pointed out Conley’s indoor advantage before wishing him luck in the championship game.

On the other side of the bracket, Lavine faced Allie Quigley, a guard with the Chicago Sky. Quigley’s sharpshooting posed a problem for Lavine early, as the Bulls high flyer trailed H-O-R to H-O before rallying back for the win.

Lavine relied on his athleticism, connecting on multiple between-the-leg layups that required hangtime and body control. His turnaround free-throw shot gave Quigley four letters, which was followed by an off-the-backboard between-the-leg layin that clinched the victory.

“I know you’ve got an array of shots to pull from,” Snyder told Conley.

“Make sure you don’t forget about the ambidextrous package. It’s always hard for me to remember if the left or the right is the strong hand, so good luck and we’re watching. Bring home the W.”

The HORSE title matchup between Conley and Lavine proved to be a showcase of athleticism versus ambidexterity.

Conley began with a behind-the-back layup that Lavine couldn’t match, followed by a free throw made with his eyes closed to grab a quick two-letter lead.

When it was Lavine’s turn, he jumped, tapped the ball off the backboard, and finished the layup on the left side before landing. Conley couldn’t respond to the athletic move for an H.

Unlike Lavine’s other opponents, Conley matched Lavine’s 360 layup off the glass. Another right-handed make from long-distance forced Lavine to shoot the same shot left-handed and resulted in an H-O-R.

Furthermore, Lavine’s outdoor court in Washington State was damp from a light drizzle of rain, which created another challenge while trying to maintain grip. A bank shot 3-pointer from up top brought Lavine to within one letter, H-O-R to H-O, before Conley stepped up the degree of difficulty on his shots to close the game.

First, Conley punched in a shot off the board while the ball was spinning on his finger to give Lavine an H-O-R-S. To seal the deal, Conley made the same shot that he used to eliminate Catchings: an underhand shot from behind the backboard.

“He (Conley) got some tricks I had never seen before. You know, it was fun,” Lavine said.

With the win, Conley was awarded $200,000 from State Farm to be used for a charitable donation focused on coronavirus response efforts.

“To be able to compete with these guys, they were great opponents,” Conley said after the win. “It was just a fun environment to be part of, and give us all something to do in this time when we’re all just sitting around the house.”

Lavine and Conley encouraged the fans who tuned in to the competition to remain safe, patient, and positive during this difficult time.