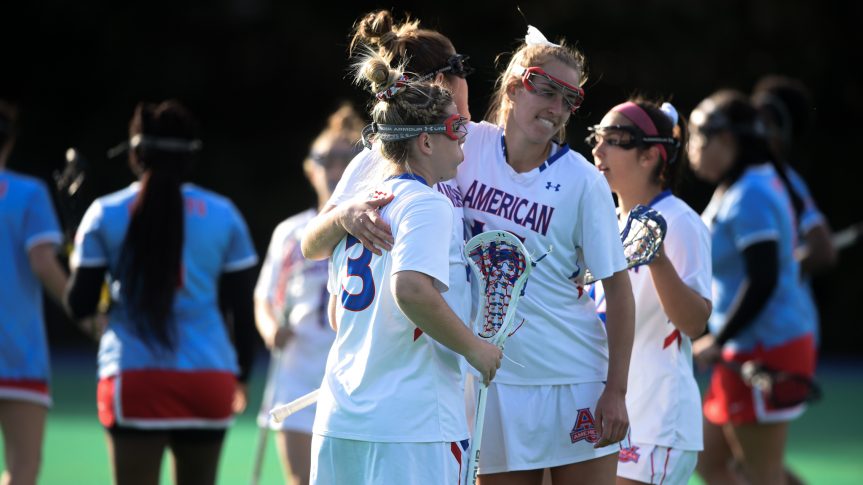 WASHINGTON – After defeating Presbyterian 19-9 on March 10, the American University Women’s Lacrosse team was undefeated and ready to unleash its high-scoring offense on its Patriot League opposition during conference play.

However, the spread of the coronavirus forced college sports officials to call off the rest of the lacrosse season. Interim Head Coach Maureen Breslin recalled the last meeting with her players being “filled with a lot of tears” but hopeful for the future.

“Going undefeated is an amazing thing,” Breslin said. “The way they focused on practice and worked on learning the plays and being specific with their shots. They took it seriously, and it translated into the games.”

Despite its season being cut short, American’s undefeated 2020 record, the first in school history, is being revered as a historical one. Players and coaches hope it is the start of a more victorious era in Eagles’ lacrosse.

American’s undefeated run consisted of seven straight victories against nonconference opponents, and the Eagles completed its first winning season since 2011.

The record received notoriety for American as it finished the year as one of eight Division I teams to win all their games, receiving votes in the final women’s lacrosse Division I Media Poll.

While it was “meaningful” to receive the recognition, Breslin called it a step forward as part of a long-term plan for the Eagles. After finishing 2019 with a 7-10 record, American entered the 2020 offseason with five returning senior players looking to make their first Patriot League Tournament appearance before graduating.

Before the start of the season, former head coach Jenna Petrucelli was released in December for violating university policy on “misconduct and mismanagement,” according to a report by The Eagle. The athletic department hired Breslin, a former assistant field hockey coach and American lacrosse player, as an interim for the season.

With the help of coaching staff, Breslin said the Eagles remained focus on controlling their own narrative, which was the theme of the season.

One of those bright spots was on offense, where American led all Patriot League teams by averaging 19.43 goals a game. Senior attacker Casey Harkins led the way, establishing career-highs in goals (18) and assists (34).

Harkins, a former Poolesville High School three-sport athlete, became the team’s offensive leader with her passing abilities to find junior Emma Vinall and other Eagle players in perfect shooting opportunities. Breslin credits her in-game decision-making and her “commitment to the team” as reasons how Harkins broke the school’s career assist record (61) in seven games.

“You don’t become the school’s assist leader by being selfish,” Breslin said. “And I think it was clear from the very beginning that Casey was behind the goal [during games] looking for the right person to make the right pass to, even when she could have rode the crease herself.”

After opening the season with two crushing victories over Delaware State and Saint Francis, American earned a 20-19 overtime win over Longwood on February 22. Tight encounters against George Washington and Wofford showed their resiliency. Eleven combined goals by junior Kendall Goldblum (6) and senior Erica Skowron (5) was enough to give American their sixth straight win on March 7.

Their final game against Presbyterian provided the most fireworks as Vinall scored nine goals, setting a new school single-game record and being named Patriot League Attacker of the Week. Harkins excelled as well, breaking three records, including single-game assists (11) and points (12), as the Eagles throttled the Blue Hose to end their shorten season on a high note.

“We had games that we won with a fair score gap, and then we had games where we went to overtime or goals traded until the very end,” Breslin said. “They really worked hard to finish this season 7-0.”

Before their minds wander of dreams in qualifying for the national tournament, Breslin said the program needs to work on the basics, including finding a permanent head coach.

The team already has its 2021 recruiting class, and its successful campaign will have more players and aspiring coaching considering the Eagles. Returning Players have already begun their offseason workouts in the middle of the quarantine.

With its new winning culture combined with its measured approach, American’s first step is to qualify for the Patriot League tournament. Facing off with likes of Navy and Loyola Maryland will indicate its growth as a team. However, Harkins said the future would not discredit the significance of finishing a season undefeated, regardless of the circumstance.

“Going into this season, I think we all had the same mindset and goal to prove people wrong,” Harkins said. “We were definitely the underdogs this year, but the team worked so hard every single day to have the success that we did.”