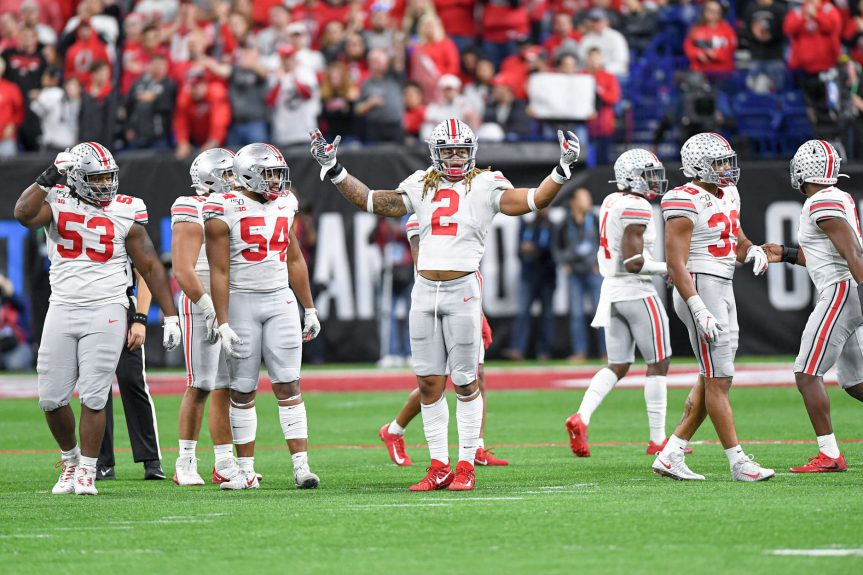 BRISTOL, Conn. — Ohio State defensive end Chase Young, widely regarded as the top defensive prospect in college football, was selected No. 2 overall by the Washington Redskins in the 2020 NFL Draft.

The Upper Marlboro native led the Buckeyes to a 13-1 overall record in 2019 behind a breakout junior season. Young garnered national attention as he posted historical numbers that led to his unanimous All-American selection in addition to six individual awards.

For Young, receiving the call from Washington, before NFL Commissioner Roger Goddell announced his selection, was the moment he accomplished his life goal of making it to the league.

“It means everything. If you think about it, I’ve been working my whole life for that moment, for that call on the phone,” Young said. “Just to be here right now, it’s crazy. I’m definitely very grateful for this opportunity and just ready to get to work.”

Young’s journey began at St. Vincent Pallotti High School before he transferred to DeMatha Catholic for his junior and senior years. The former two-sport athlete helped lead the Stags to consecutive Washington Catholic Athletic Conference championships and received multiple honors before leaving for Ohio State in 2017.

With the Buckeyes, Young, a 6-foot-5, 265-pound pass rusher, used glaring agility, athleticism and explosion to disrupt the opposition.  During the 2019-2020 season, he led the nation with 16.5 sacks and seven forced fumbles to go along with 46 tackles, as Ohio State finished as the country’s top-ranked defense.

The All-Big Ten honoree won the Chuck Bednarik Award and the Bronko Nagurski Trophy – two awards presented yearly to the college football’s foremost defensive players – and was named a Heisman Trophy finalist. In three seasons with the Buckeyes, Young recorded 99 tackles, 42.5 tackles for loss, 30.5 sacks and 10 forced fumbles, rounding off his career as one of the most accomplished defensive players in program history.

He will now join Washington, where new Head Coach Ron Rivera plans to unveil more dramatic changes to help the franchise following a 3-13 record last season. Young’s selection and several free-agent acquisitions to fix the defense were the first parts of the rebuild, Rivera said.

“We’ve always felt pretty good about Chase. It was just a matter of us doing our due diligence going through the process, obviously,” Rivera said. “I’ve been involved with the first pick, and now I’m involved with the second pick. In both cases, I believe we’ve taken the guy that will impact not just his position group, not just the linebackers, not just the [defensive backs], but I think the entire football team. That’s why we did what we did.”

“Coach Rivera was the first one that called me, and he basically told me that he was going to make me a Redskin,” Young said. “He actually talked to my dad after that, and he got on the phone with my father and told him again that they were going to take me at number two. It was definitely an exciting moment.”

Young reunites with former teammate and Redskins quarterback Dwayne Haskins, another local product who also played at Ohio State before being selected No. 15 overall in last year’s draft. The defensive end said he received the “inside scoop” on how to adjust to the league from Haskins when they spoke earlier in the week.

“At the end of the day, he told me it’s all down to the grind and basically how you have to grind,” Young said. “I just listened to him and am going to be a sponge, just trying to soak up everything I can. That’s my first thing, just going in and grinding.”