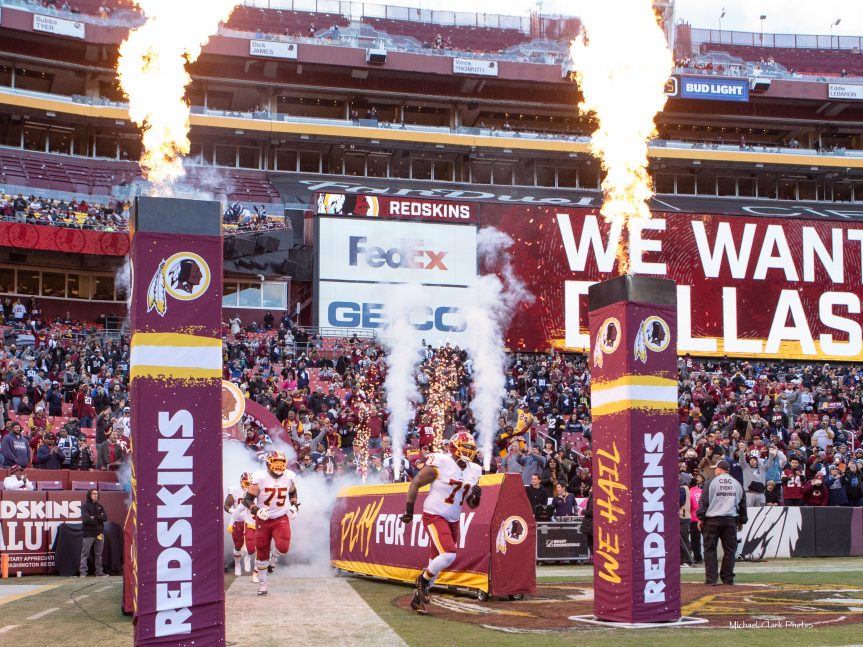 The organization has made it clear that its sights are set on reversing a rough 2019 season, where Washington was 3-13 overall for a last-place NFC East finish.

On the evening of April 24, the Redskins went with Memphis running back Antonio Gibson with the second pick of the third round (No. 66 overall). Standing 6-foot-2, at 220 pounds, Gibson also excelled as a wide receiver with the Tigers last season.

Gibson, the 2019 American Athletic Conference Special Teams Player of the Year, registered 38 receptions for 735 yards and eight touchdowns to lead Memphis to an AAC Championship and a Goodyear Cotton Bowl appearance.

The Georgia native also rushed for 369 yards and four touchdowns on 33 carries and went on to record 1,749 all-purpose yards as a senior.

Gibson believed he made his mark at the combine and is more than confident of his capabilities at multiple positions.

“I view myself as a weapon,” Gibson said. “I’ve been playing running back and receiver my whole life,” said the 21-year-old.

“But not just that, I’ve been playing all over the ball. Offense is something that I’m very talented at… It’s always been like that since a young age, and I feel like I can dominate wherever they put me.”

Washington Redskins Head Coach Ron Rivera said he believes Gibson will fit well with the surrounding offensive talent and can contribute in several ways, whether it’s in the slot, the backfield or on special teams.

“This is a very versatile, young football player that we really think is going to be a guy that can get on the field for us early and contribute.”

Saahdiq Charles, an offensive tackle from LSU, was selected by Washington as the second pick of the fourth round (108th overall). He was surrounded by an abundance of high-caliber talent and helped the Tigers win the 2019 national championship over Clemson.

The versatile offensive lineman expected to offer guard and tackle roster flexibility was part of a unit that was named the 2019 Joe Moore Award winner – an honor given to the nation’s best offensive line.

The 6-foot-4, 321-pound Mississippi native, is said to have tremendous talent and upside by Redskins Vice President of Player Personnel Kyle Smith.

“It feels like a dream come true,” Charles said when asked how it felt after getting drafted. “Ever since I was a kid, I just wanted to be an NFL player, play professional football. I just love the game man, it’s just a blessing.”

At 6-foot-4 and 220 pounds, Gandy-Golden possesses the perfect frame and athleticism to make an immediate impact at his position. He clocked 4.6-second 40-yard dash in the combine and a 36-inch vertical leap. The Dallas, Georgia, native recorded 79 receptions for 1,396 yards and 10 touchdowns on his way to a standout senior season for the Flames.

Center Keith Ismael was the first fifth-round pick for Washington (156th overall – acquired from San Francisco) on Day 3 of the draft.

The 6-foot-3, 309-pound offensive lineman hails from San Diego State, where he was noted for his quickness and pass-blocking proficiency. The Bay-area native contributed largely to SDSU’s 10-3 season in 2019 and was acquired via trade for offensive tackle Trent Williams. Washington also gets a third-round 2021 draft pick as part of the deal.

“Obviously, with the [T] Trent [Williams] stuff, it’s been a long process, said Washington Redskins Vice President of Player Personnel Kyle Smith. “You know, I think everybody is a little bit, you guys as well, think we’re all relieved that it’s over, that it’s done.”

“From day one that we got into this, it’s a unique situation, where, a lot of different layers to it, and we did the best that we could. We opened it up to the agent to find a partner and all that stuff, and finally, we’re to the point where it’s over, and we’re all moving in our own direction. We wish him the best, and I think [Head] Coach [Ron Rivera] does as well, and we’re moving forward.”

Chosen 17th in the fifth round (No. 162 overall – traded from Seattle) was Michigan linebacker, Khaleke Hudson.

In Ann Arbor, Hudson did well enough to qualify as a semifinalist for Jason Witten Collegiate Man of the Year in 2019. He is also the program record-holder for most tackles for loss in a single game with eight against Minnesota his sophomore year.

The McKeesport, Pennsylvania, native led the Wolverines with 102 tackles, including 3.5 for loss, two sacks, three pass breakups and a blocked punt.

Arkansas safety Kamren Curl was selected second in the seventh round (No. 216 overall) by Washington. As a junior in 2019, Curl tallied 76 total tackles and four tackles for loss to go with two interceptions and two forced fumbles.

The 21-year-old showed tremendous promise with the Razorbacks and has the potential to contribute as a cornerback or on special teams.

The final draft pick for the Redskins was seventh-round pick James Smith-Williams (229th overall – on a trade from Denver), an N.C. State defensive end.

During his tenure with the Wolfpack, Smith-Williams amassed 82 tackles, 12 tackles for loss, and three pass deflections. Smith-Williams was another semifinalist for the Jason Witten Man of the Year Award.

With the deals that transpired throughout free agency, and the subsequent draft picks who will make their transition from collegiate to professional football, Rivera and the Redskins will soon begin the journey of restoring the franchise into what they hope will be a turnaround season in Washington.

“Well, I think the biggest thing more so than anything else was going out and drafting the young men that we believe can be a part of what we want to do,” he said.

The latest acquisition to the Redskins roster was former LSU tight end Thaddeus Moss, the son of legendary receiver and 2018 Hall of Fame inductee Randy Moss. Washington signed the 6-foot-3 junior as an undrafted free agent, as the move was confirmed on the evening of April 25.

A Charlotte native and transfer from N.C. State, Moss put together a stellar 2019 campaign.

Moss, alongside No. 1 pick Joe Burrow, helped guide LSU to a national championship with five receptions and 36 yards for two touchdowns in the 42-25 win over Clemson on Jan. 13.

“Thaddeus [was] a productive guy this year. He had a nice season, he’s got really good hands and ball skills. He’s a tough kid that competes in the run game,” Smith said.

“When you’re signing priority free agents, you need to have two qualities that really stand out and those are it, and that’s what we base that stuff off of… it was really a no-brainer to sign him.”