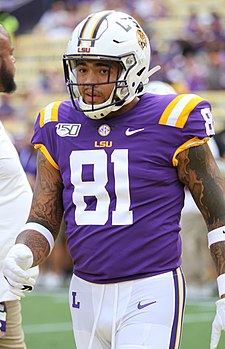 WASHINGTON – The Washington Redskins wrapped up the 2020 NFL Draft, but the Burgundy and Gold also recently signed some notable undrafted free agents.

Perhaps one of the most talked-about acquisitions that the Redskins made was the signing of Moss. The big-bodied tight end corralled 47 receptions for 570 yards and four touchdowns while averaging more than 12 yards per catch last season en route to a championship win over Clemson. With the current tight end depth situation, Moss could see time sooner than later.

Montez had a stellar collegiate career for the Buffaloes where completed 824 passes for 9,710 yards while throwing 63 touchdowns to 33 interceptions. The 6-5, 235-pound gunslinger will add depth behind second-year quarterback Dwayne Haskins and newcomer Kyle Allen.

Wright, a 6-2, 220-pound receiver, played four seasons with the Owls and accounted for 134 receptions for 1,552 yards and 12 touchdowns. He was also a threat on the ground rushing for 552 yards and averaged 6.1 yards per carry. Wright’s best statistical season came during his sophomore campaign when he hauled in 46 balls for 668 yards and four touchdowns.

Johnson registered 153 receptions for 2,190 yards and 13 touchdowns while rushing for 135 yards on seven attempts during his stint with the Tigers in the competitive SEC Conference.