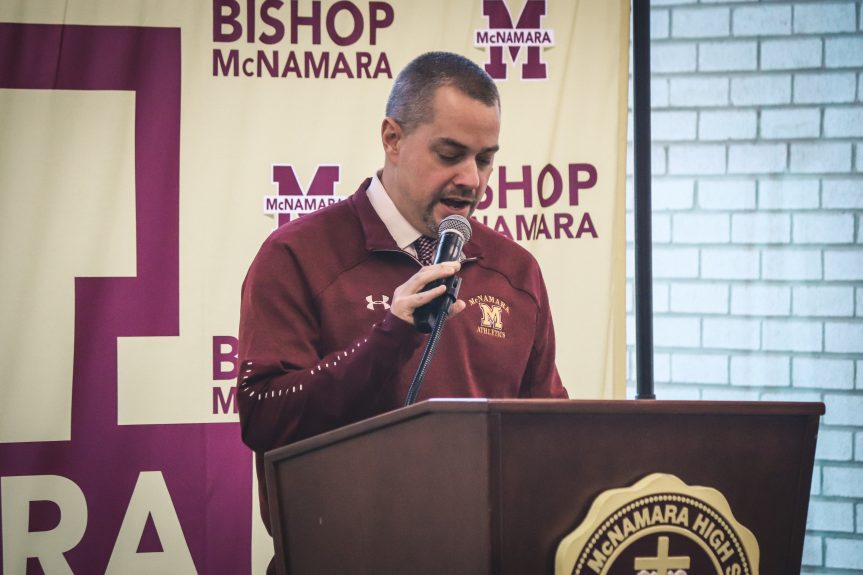 HYATTSVILLE – As the 2019-2020 basketball season was in full swing, Martin “Marty” Keithline had a moment of reflection.

When his father, a fellow coach in his own regard, died in January, it was the first time Keithline said he thought of returning to coaching basketball in any capacity. Three months later, as the position he once held was reopened, Keithline jumped at the chance at returning to the sport he loved.

“I had been going straight since 1996 until 2018 as a head coach,” Keithline said. “So I never had time just to sit back and reflect. And those two years gave me a chance to reflect on what is important in life. Coaching young men in the sport of basketball is important to me, and that was something important to him as well. That loss really affected me. I wanted to get back to coaching basketball.”

McNamara welcomed the return of Keithline, formally announcing his return to the sidelines as the Mustangs’ new head boys basketball coach on May 6. He will continue as the school’s director of athletic operations while coaching, school officials said.

“Coach Keithline’s effectiveness at engaging our student-athletes in both the technical skill development required on the court and their academic investment in the classroom is a huge win for our boys’ basketball program,” Incoming President/CEO John Barnhardt said. “I could not be more excited to see how his program will influence our school community and the larger impact they will have in the WCAC.”

While he is happy to return to the role, Keithline said he has no time to cherish the moment. Following the announcement, he contacted all the returning players and their families to inform them of the news and start their offseason schedule. Until state and local leaders deem it safe, McNamara will not access to their athletic facilities due to the COVID-19 pandemic.

McNamara elected to let go of head coach Keith Veney Sr. after two seasons in charge and started an open coaching search. Veney was one of the first people Keithline met during his arrival to McNamara in 2001. The decision to let him go was “out of [my] hands, Keithline said. Despite his position at hte school, he faced the same interview process with the school president and principal as every applicant.

“From the viewpoint of being the director of athletic operations, I was put in a tough spot,” Keithline said. “But I live my life with integrity, and I am going to do what I can to make the administration happy and make sure these kids and parents feel that they are getting everything they need from the basketball and academics [and] education side of McNamara.”

It has been the tale of two different basketball programs at the Forestville-based school. Its girls’ basketball team under Head Coach Frank Oliver Jr. won its first Washington Catholic Athletic Conference (WCAC) girls basketball tournament since 2008 this past February. Meanwhile, the boys’ basketball team has yet to win the annual championship since 1995.

Under Veney, the Mustangs finished 39-23 in two seasons but did not surpass the quarterfinal rounds of the WCAC Boys Basketball Tournament. New Hope Academy in Landover Hills announced on May 4 that Veney would take over its boys basketball program.

In Keithline’s first 15 years with McNamara, the Mustangs amassed 242 victories. His players were regularly recruited by “notable colleges and university,” according to Keithline’s school profile. That reputation, school officials say, will hopefully continue during his second stint.

“I look forward to the enthusiasm, dedication, and knowledge and understanding of the game he will bring to our boys’ basketball team,” Principal Dian Carter said. “He is anchored in our mission and will hold our student-athletes to high standards both on and off the court.”

Heading to next season, Keithline will be without graduating senior Kenny Womack, a two-sport athlete who will attempt to play both football and basketball at Sacred Heart University.

However, rising junior Favour Aire will look to be the Mustangs’ difference maker next season. The 6-foot-10, 210-pound center finished the season being named to the WCAC All-Conference First Team after his sophomore year. The four-star athlete has received offers from three schools and is listed as the state’s No. 2 junior recruit, according to 247Sports Composite.

Together with returning forward Terrance Butler, McNamara will look to progress further in both the WCAC and outside competitions. To accomplish this goal, Keithline said the basics will need to prioritize first under this time of quarantine, so basketball can be the focus as soon as they return to the gym.

“The team is very talented; I am excited for the young men in this program,” Keithline said. “It is all about the team, and individual success will come through team success. I look forward to working with all the young men in the program.”