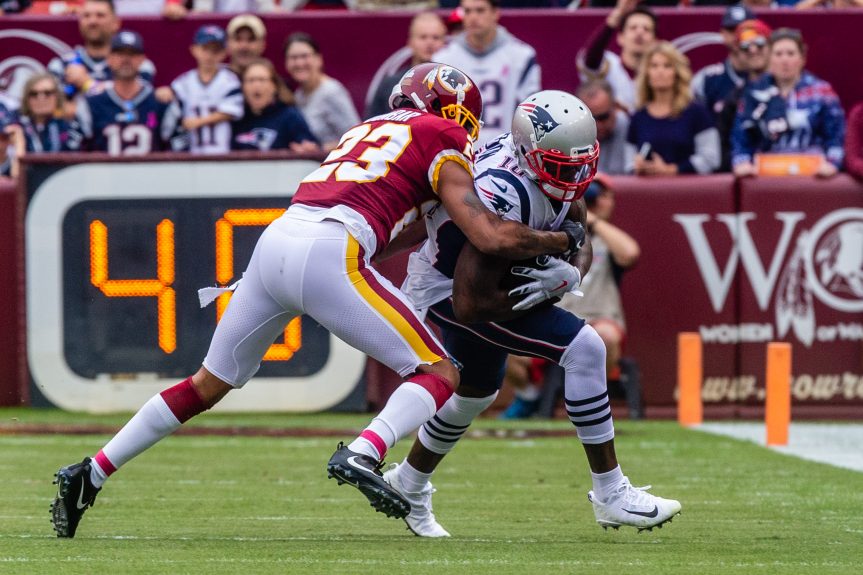 MIRAMAR, Fla. — The latest developments in a case involving former Washington Redskins cornerback Quinton Dunbar and New York Giants cornerback DeAndre Baker have revealed that the two are innocent of armed robbery charges based on multiple affidavits from witnesses.

Numerous reports have confirmed that Dunbar’s lawyer, Michael Grieco, said he has allegedly five sworn affidavits from witnesses saying his client was not armed and had no involvement in an alleged armed robbery at a Miramar, Florida, cookout on May 13 following a fight that erupted.

“I’m confident that he was there but confident he didn’t commit a crime,” Grieco said about Dunbar, according to an ESPN report. “He got targeted because of who he was.”

On May 14, the Miramar Police Department (MPD) issued arrest warrants for Dunbar and Baker, outlining the alleged criminal acts on a 14-page affidavit, including armed robbery by forcibly taking money and watches from unidentified victims.

Dunbar was accused of pointing a firearm at an individual as part of the purported incident, which led to multiple charges.

Witnesses at the scene told investigators that two other men were involved in the alleged incident.

However, because Grieco and Bradford Cohen, Baker’s attorney, were able to obtain written statements from several witnesses refuting the abovementioned allegations, the scope of this case has taken an interesting turn.

Cohen, a criminal defense lawyer, based in the Fort Lauderdale area, issued a statement on Instagram on May 15 thanking MPD while pointing out Baker’s innocence.

“I want to thank @miramarpd for being professional in regards to surrendering and issues with the case. We understand that the officers can only base warrants on what was told to them at the time. We have had affidavits from several witnesses that also dispute the allegations and exculpate our client,” Cohen wrote.

“Our investigator has had them for some time. We would have rather presented them to the court at the proper time, rather than in the media, but in this day and age, people rush to judgement. Where some seek publicity, we seek justice. I look forward to moving this case forward to proper conclusion, as we believe our client is innocent of any charges.”

Dunbar, a former Washington Redskin standout, joined the club as an undrafted free agent in 2015 after leaving the University of Florida. The 27-year-old recorded 150 tackles and nine interceptions in 58 games over his five-year stint in Washington.

In March, the Seahawks acquired the 6-foot-2 Miami native in a trade with the Redskins.

The Seahawks’ public relations department has made it known that it will refrain from commenting on the situation.

The team’s public relations division released a statement from a Seahawks spokesperson in a May 14 tweet: “We are aware of the situation involving Quinton Dunbar and still gathering information. We will defer all further comment to league investigators and local authorities.”

Whether the investigation and allegations will affect Dunbar’s future in Seattle and Baker’s future in New York is yet to be determined.

Kansas City Chiefs cornerback Bashaud Breeland was arrested on April 28 on multiple charges after an encounter with law enforcement officials outside of a Fort Mill, S.C. gas station.

The former Redskins cornerback and punt returner was charged with driving without a license, having alcohol in a vehicle “with a broken seal,” having an open container of beer or wine in a motor vehicle, resisting arrest and possession of marijuana.

A police incident report noted that Breeland pushed a deputy as he resisted arrest. The officer reportedly drew his taser and gun, but didn’t fire either weapon.

“We look forward to reviewing all available evidence in this matter, including the arresting officer’s body worn camera footage, dash camera footage, and surveillance footage from the gas station where the incident is alleged to have occurred,” says the statement.

“Mr. Breeland is facing only misdemeanor charges in connection with this incident. None of the crimes charged allege that Mr. Breeland was consuming alcohol at the time of arrest.”

The firm went on to say that Breeland’s encounter with police was prefaced by a lawful purchase at the convenience store.

In his four seasons with the Redskins (2014-17), Breeland registered 255 tackles, 60 passes defended and eight interceptions in 60 regular-season games.

After leaving Washington, Breeland joined the Packers for a season before coming to Kansas City in 2019. He re-signed with Kansas City on a one-year deal worth $4.5 million last month.

The South Carolina native took to social media to share his thoughts on the incident and the speculation that followed.

“Lot of people wanna speculate On my situation and don’t know the facts,” Breeland said in a Twitter post that has since been taken down.

“I’m not fighting to clear a name I don’t care wat people think I know the truth innocent until proven guilty.”