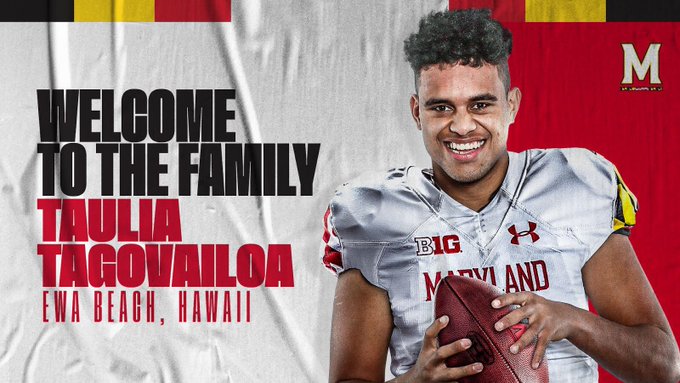 Tagovailoa, a unanimous four-star prospect out of high school, comes to Maryland from the University of Alabama and has three years of eligibility remaining.

“Taulia has outstanding field vision and excellent pocket awareness,” said Locksley. “He’s a twitchy passer that has the ability to make and extend plays in and outside of the pocket because of his above-average athleticism. Taulia has terrific touch and trajectory on his throws and delivers the ball with above-average accuracy. He’s a highly competitive player that will bring great competition to a good quarterback room.”

“I’m so excited to start the next chapter of my career at the University of Maryland,” said Tagovailoa. “I’m incredibly grateful to all of the amazing people at Alabama, but am also thrilled to join the Terrapin Football Family. I have a great relationship with Coach Locksley and am excited to see what he’s building. I can’t wait to be part of it and I plan on working incredibly hard both on and off the field to make my family, teammates, coaches and fans proud.”

Before enrolling at Alabama, Tagovailoa was rated as the No. 4 pro-style quarterback in the 2019 class by 247Sports and PrepStar. He rewrote the Alabama high school record books, becoming the only quarterback in state history to have at least four 400-yard passing performances in his career, throwing for 3,728 yards and 35 touchdowns as a senior at Thompson High School in Alabama. Tagovailoa led Thompson to the 2018 Class 7A state championship and was selected to the Class 7A All-State first team in 2017.

Taulia is the younger brother of Tua Tagovailoa, the No. 5 overall pick in the 2020 NFL Draft by the Miami Dolphins. Tua Tagovailoa led Alabama to the 2018 College Football Playoff National Championship with Locksley serving as the Co-Offensive Coordinator.

The following season, Locksley was promoted to offensive coordinator and Tua Tagovailoa threw for 3,189 yards and a school-record 37 touchdowns as the Crimson Tide offense averaged 47.9 points and 527.6 yards per game. The Locksley-Tua Tagovailoa combination helped Alabama set school records for points scored (623), single-season total offense (6,859 yards) and passing yards (4,231) in a season.