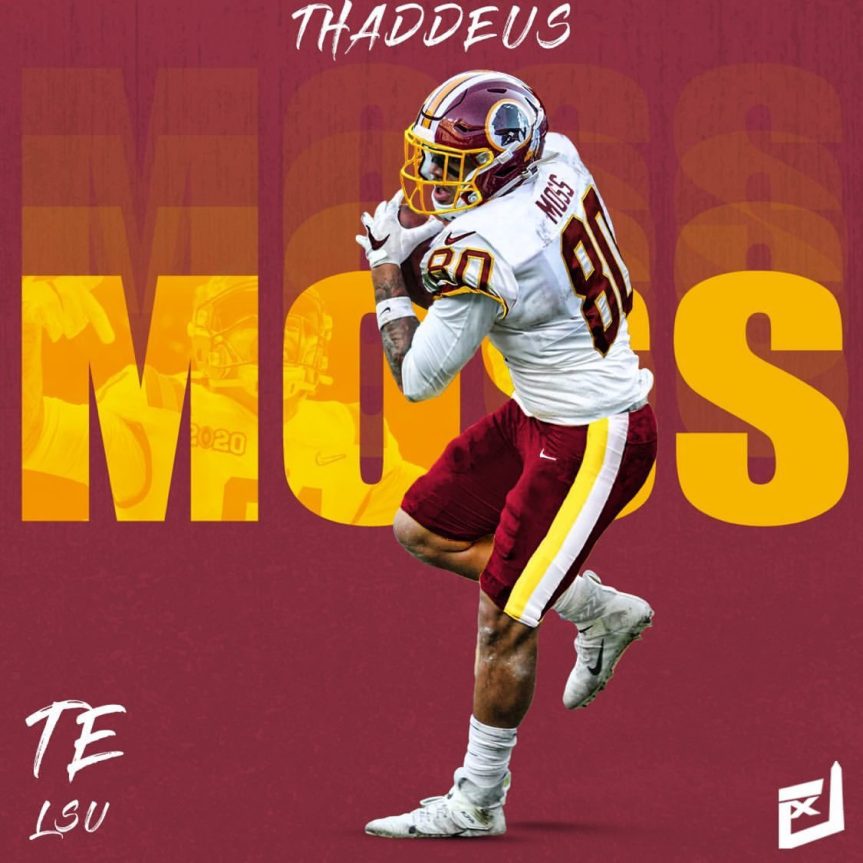 Get to know Moss through Q+A

On how he embraces the Moss name:

“Well, I mean I embrace it a lot. You know, my dad [former NFL WR Randy Moss] only has two sons, so there’s only two of us that can carry on the last name. I’ve always had a target on my back, my whole life growing up. So I’ve kind of just grown accustomed to it and you know, you kind of use it as fuel, and look forward to it.”

On how his last name could help him in the NFL:

“To answer the question no, there’s nothing additional that it can do for me. Which is exactly how I would have it anyways. I wouldn’t want my last name to do anything for me, I would rather work for everything for me, and not be given anything. Just still what he’s [Father, Randy Moss] done for me up to this point, still there in my corner, giving me advice on whatever it is. You know, he has a few things to school me up on, now that I’m in the NFL and there’s still a learning curve for me. Just being in my corner and you know, being there for support and advice.”

On why he chose Washington:

On his knee injury:

“Where I’m at with the rehab, so first I went and had the best doctor in sports do a surgery, so I feel really good about the surgery, I’ve felt really good about the surgery. Rehab is going great. You know, I’m ahead of schedule. I mean everything is going great with it. I will be ready to go when hopefully we start up and get going football wise, I’ll be ready to go. I went to Green Bay and had Doctor Anderson do it. As soon as I could after this draft, I didn’t really have time, so the following week after the draft I went and had Doctor Anderson do it.”

On working with T Saahdiq Charles:

“Man absolutely. It was great when I found out that Washington contacted me and they also drafted him. We’re not only teammates, but that’s one of my best friends off the field. One of my best friends off the field. So it’s a blessing to still be on the same team, still be teammates, be chasing our dreams and everything together. Have I been able to talk to him absolutely. I talk to him almost every day. On top of that, not only us being teammates and being best friends, we also play next to each other. It’s not like he’s the quarterback and I’m the receiver. With him being the left tackle, we have such a good chemistry with us being best friends and having so many reps and stuff next to each other.”

“I mean he’s a reliable teammate, he’s a great teammate first. A dependable teammate. I could always rely on him to get the job done, always rely on him to always have the answers and give it his all. As a teammate that’s really all I could ask for is, having a teammate that knows what he’s doing, and giving it all he’s got. You know, but he’s a baller, he’s going to do great here in his first year at Washington. I’m looking forward to seeing how he plays.”

On not being drafted:

“Well, I mean, first it’s a blessing to be here. I thank God and the Redskins for this opportunity. Ultimately all I could ask for was an opportunity. It was definitely a slap in the face, I put a lot of work in. Years of football, we went undefeated, I won a National Championship. I played my best ball in our biggest game. So I definitely felt like it was a slap in the face not getting drafted, having picked kickers and punters, and special teams. Just seeing guys getting picked over me, I definitely felt a type of way about it. But, it’s no difference. I’ve always had to prove myself my whole life. Having the last name that I have I’ve always had to prove everybody wrong, or just prove myself right my whole life and this is no difference.”

On how he plans on proving teams wrong for not drafting him:

“I mean first off, I’m not going about this trying to prove teams wrong. Just proving myself right. I’m not going out there with a vengeance, trying to prove people wrong. I’m just trying to go out there and be the best football player that I can be, be the best teammate that I can be, you know, and like I said just prove myself right. Of course, I’m still a rookie. So getting in there and adjusting to the learning curve and learning the offense, and doing what it takes, doing the little things that a rookie has to do, and earning my keep on the team and just from there, just playing football, and everything will take care of itself.”

On what he has learned in virtual rookie minicamps:

On dealing with learning virtually:

“Well for me, I’ve had to change just the way I’m learning this playbook just from going from college to the NFL, it’s a whole lot more information. It’s still essentially the same information, it’s just a lot more. Just a learning curve, learning how to learn and learning how to study differently going from college to the NFL. I took about, I think around my phone right now as I’m looking I have about 25 pages right here with all notes on, you know I wasn’t a big writer in college so that’s one thing that has definitely changed since I’ve gotten to the NFL, my notetaking. I write, I’m a writer, I don’t like typing. So I write on pieces of paper and just keep them all around me.”

On how the Redskins approached him after the draft:

On how he will prove himself while not being able to go to camp in person:

“They’ll know it when the time comes. Whenever that day is, when we put pads on, on day one they’ll know that. I already feel like with the season that we had last year, we being LSU, and the season that I had last year, everybody has a good idea of what I can do and what I am capable of. Once I get healthy, get back out there on the football field and put them pads on, everybody will be able to see what I can do.”

On being able to establish his own legacy in the NFL:

“That’s definitely the approach that I’m taking to this. I’m not taking the approach that I’m trying to make teams feel me for going undrafted. It’s not the approach that I’m taking. That’s going to come with me just playing football, just playing football. That’s what I told my dad, after the draft we were sitting there, well actually during the draft we were sitting there, you know I kind of had a good idea of how things were going to unfold. I was still holding on hope and hoping things would turn out differently. He was kind of sitting there, not really knowing what to say to me, and I went ahead and just told him, like look, this is no different from what I’ve had to do my whole life. The last name Moss, people have always had their eyes on me and always doubted me and always wanted to see what I can do, and always had expectations. This is no different. Being an undrafted free agent, I don’t really have a lot of expectations, so going in there and playing football. You know, having to really get out the mud and work for everything. That’s what I’ve been having to do my whole life and that’s one thing that people don’t understand, and that people get misconfigured is me having the last name that I have, a lot of people think that I was handed a lot of things or that I was given a lot of things but that’s actually the opposite. People always ask me with the last name, what are some pros and cons, that’s definitely a con to it. But absolutely I’m looking forward to the opportunity to work for everything. Whatever my NFL career is, whether that be one year, two, three, four, five to ten, you’re going to have to respect it, because I worked for everything. I wasn’t given anything.”

On the other teams that were interested in him:

On conversing with RB Adrian Peterson:

“I haven’t had any conversations with anybody on the team, actually I have some former teammates that I used to play with I think three or four that’s on this team that I’ve been able to contact and just stayed in contact with. I reached out to [QB] Dwayne Haskins, just wanted to introduce myself and just say hey, but other than that, I haven’t been able to speak to anybody. But you know, with Adrian Peterson with him having played with my dad, I mean I’m not going to go up and introduce myself to him, that’s just not what type of guy I am. That’s just not me.”

On his relationship with LSU Coach John Decoster:

“Well they’re getting a young coach, they’re getting a hell of a coach first off. They’re getting a young coach, a real active coach, he can relate to his players really good, he’s a real player’s coach. He’s been around some good football minds, he’s been at LSU for the past however many years. He’s a hell of a recruiter, recruited the number one tight end in the, I think ever, coming out of high school. And he was able to recruit him and get him, the two tight ends that he’s had, one got drafted and the other broke the records, the tight end records at the school. So I think that right there speaks a lot about him as a coach. I mean I can’t say enough good things about him. I love Coach Decoster. When I got to LSU, he was the first guy that I talked to. When I actually got on campus, I sat down with him at the time, he was the GA, not knowing that he would be my position coach three years later.”

On what identity he wants to build in the league:

On the biggest piece of advice he’s gotten from his father:

“I mean, to be honest, he really doesn’t give advice unless I ask him. He’s not one of those parents that’s just always in my ear. You know, he knows that I know that if I need him or I need advice I’m going to go to him and ask him. The critique I get on television is not going to be worse than the critique I got from him being in the house or being in the car together. He was the defensive coordinator of my high school team my junior year of high school. So we would ride, after practices or after games, we would ride home together. You know and I would hear it from him. He could only say so much, so on TV I’m not worried about that.”