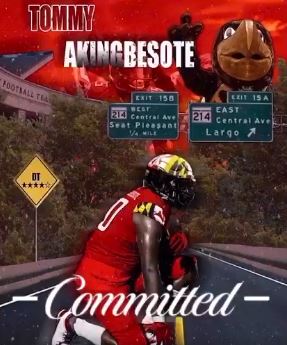 Akingbesote is a four-star defensive tackle at Flowers, who is part of the Class of 2021 and will play his senior season in 2020 before heading off to College Park.

The rising senior made his announcement on Twitter, via a 44-second video showing various logos of colleges that showed interest in him, and a poster with his Maryland commitment at the end, with Meek Mill’s song “Dreams and Nightmares” playing in the background.

Akingbesote is just another one of the DMV’s elite high school players committing to a local school, such as Our Lady of Good Counsel and UMD alum Stefon Diggs.

On 247Sports.com, the four-star defensive tackle has a 93 rating, while on Rivals.com, he has a 5.5 rating.

“The DMV raises young stars,” said Akingbesote. “I believe you should want to put on a show for your hometown.”

According to a scouting report, Barton Simmons, 247Sports Director of Scouting, described Akingbesote as a “long-armed, athletic-framed interior defender with big hands and the type of body that will need to add weight but has significant capacity to do it.”

Besides Maryland, East Carolina, Oklahoma, Penn State, and Virginia Tech thought he would be a good fit for their respective programs.

“The DMV raises young stars,” said Akingbesote. “I believe you should want to go on a show for your hometown.”

One person pleased about Akingbesote’s decision is Jaguars head coach Dameon Powell, who coached him during the 2019 season.

“I was excited for him,” said Powell. “He always wanted to stay home and be with his family and friends here, so it’s not surprising at all.”
The defensive tackle spent his freshman year at DeMatha Catholic High School before transferring to Flowers in Springdale.

However, Akingbesote was a late bloomer as basketball was his primary sport; he only started playing football in junior high school.

Akingbesote also loved playing for Powell, as he shows significant positivity around him.

“It feels great,” said Akingbesote, “because he makes sure you’re good on the field, off the field, and in the future. Also, playing for him just excites me because his drive to win is 100,000, so he always has positive energy.”
Heading into his senior season, Akingbesote’s goals are to “dominate his opponent” and to win States.

“He’s got a lot to learn,” said Powell. “Once he starts to understand everything, he’s going to be a star.”

One of Akingbestote’s football idols is Chase Young, who also went to DeMatha and will begin his NFL career with the Washington Redskins in fall 2020.