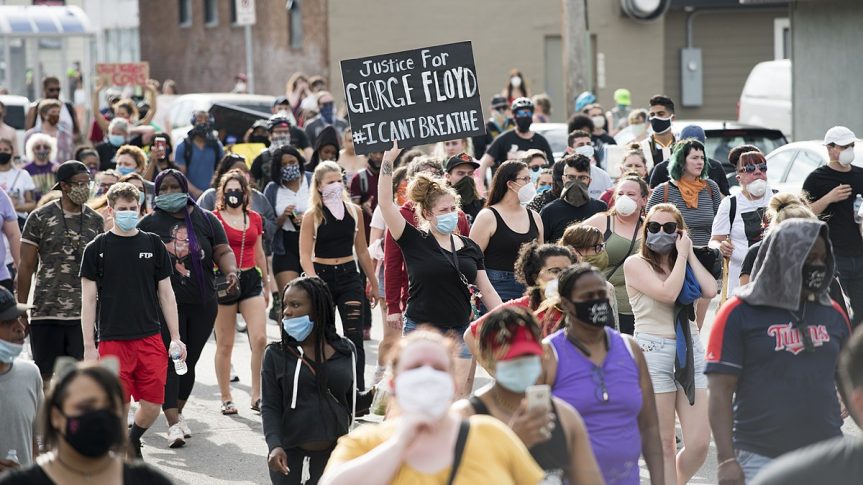 After drinking countless shots of whiskey and watching the news while reaching out to loved ones hearing how they have been coping with the loss of George Floyd, I knew it was the right time to break my silence.

Instead of taking to Twitter and saying cliché responses like ‘it’s wrong’ and that ‘systematic police brutality and racism has to stop,’ it was not enough for me to get excited about the future.

It is always a great time for a revolution, and to make sure that Floyd’s death is not in vain, I believe that we, as a nation, need to take a calculated business approach to the situation.

When the President of the United States sits back and says nothing of substance about the countless lives that have been taken away from us unjustly, there needs to be a resurgence of a new-look civil rights movement.

A coalition of like-minded individuals backed by high-profile athletes and celebrities to not only send a message but also have a seat at the table to take action for equality and force condemnation of police brutality moving forward through legislation.

I think back to Muhammad Ali, Jim Brown, Bill Russell and Kareem Abdul-Jabbar, who were not only pioneers in the world of sports, but also civil rights heroes for the greater good. They risked it all as high-profile athletes and public figures to speak about racial injustice, culminating in the pivotal ‘Ali Summit’ in 1967.

Though that momentous conference sparked change, here we are now more than 50 years later facing a new animal.

The world witnessed a police officer take his knee and shove it down on a man’s neck as Floyd cried for his mother dying on the street. As Floyd lost his life, that officer had a smug look on his face reminiscent of a hunter holding up the rack of a trophy buck in celebratory fashion as if nothing was going to happen to him.

It made me feel sick.

With the coronavirus pandemic sweeping the nation and many of Americans staying home and out of work, the difference is that everyone saw it this time.

No more ‘why would a police officer do that if the person was innocent’ or ‘he must have done something wrong.’ Like former NBA player, Stephen Jackson and friend of Floyd mentioned during a rally in Minneapolis: “When was murder ever worth it?”

Floyd’s death has to be the last straw so we can stop this once and for all. Talking about it will not change things. Protests won’t stop social injustice and police brutality. Though I believe it is necessary to have peaceful demonstrations and critical activism, there needs to be a takeaway from it all, so these actions never happen again.

My suggestion is to hold every police force in the nation accountable by using this movement and leadership to formulate a plan to punish those officers with stiffer sentences who are not serving and protecting the men, women and children of America the right way.

If our tax money is used to pay salaries and support those police forces, we deserve better, and a slap on the wrist empowers the ‘bad apples’ to continue to destroy the fabric of our country.

Obviously, not all police officers are bad people, but there needs to be a standard set. I’m afraid that once life gets back to normal and we have sports to take us away our everyday issues to escape from reality, Floyd will be just another statistic in the history books covered up by the pandemic.

Though this is one of the hardest columns for me to write in my life, I feel like whatever the suggestion is of a plan for change, that it has to happen with a seat at the table with a business plan to stop the madness.

My idea for enacting a bill into law to force harsher crimes against police officers for such atrocities is merely a suggestion to thwart if not stop police brutality and the senseless murder from those who are supposed to protect us. The system is flawed, and there needs to be a demand for accountability that can be equatable, valued and, most importantly, enforced.

However, this piece is also a call to action for athletes to come together with other public figures to force accountability with that demand.

If NFL first-round pick Joe Burrow is willing to risk losing endorsement deals for doing what is right and countless others join together with a plan for change, whatever it be, it needs to happen now.

Thinking back at what former San Fransico 49ers quarterback Colin Kaepernick did for the awareness of police brutality and injustice still resonates in my mind today.

He was letting us know that this is happening every day, but somehow, he became the enemy. Since we didn’t listen and force the narrative, now we all had to witness a man lose his life with an officer kneeling in Kaepernick’s symbolic pose.

My response is to keep pushing, get out there, question leadership if their actions are not right, hold your public servants and politicians to standards, and, most importantly, honor Floyd’s life not by the man he was but by what he’ll do for our future.