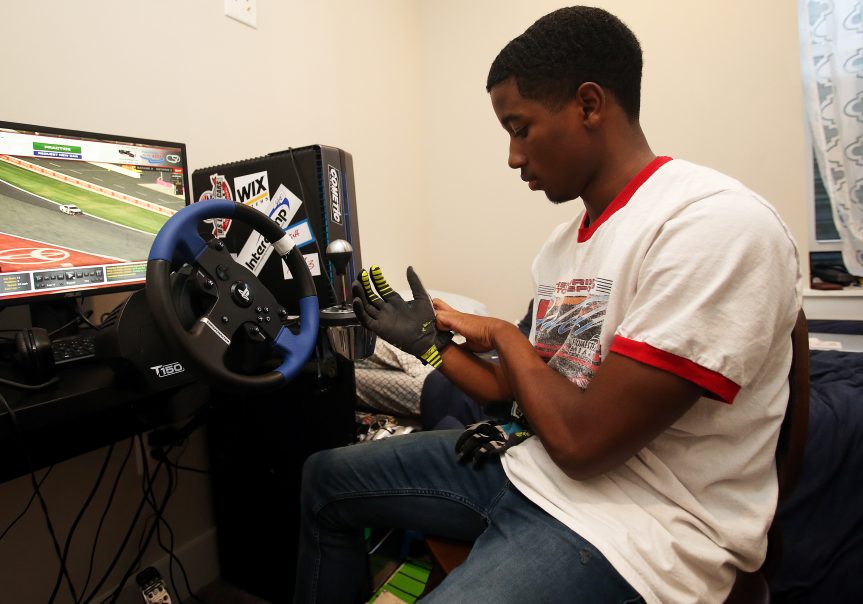 WASHINGTON — Two young gentlemen, one of whom is a local teen, joined forces to organize an event honoring the memory of George Floyd and countless other Black Americans who have lost their lives due to police brutality and racial injustice.

Rajah Caruth, a Washington, D.C. native, is an aspiring race car driver who collaborated with his friend, Monon Rahman, to coordinate the #GeorgeFloyd100 – an iRacing event designed to raise awareness of some of the social issues that have sparked worldwide protests over the past few weeks.

Caruth’s interest in NASCAR dates back to his adolescent days. Today, the 17-year-old is using his lifelong passion for not only enlightening the motorsports community but also gather support for the Black Lives Matter movement.

Rahman, a motorsports engineer, recently approached Caruth with the initial idea of coordinating the iRacing event after noticing the motorsports community had been relatively silent following the death of George Floyd.

“Approached @rajahcaruth_ with this a few days ago – we want to shed more light on George’s death from the motorsports/iracing community since not much has been done for him in the industry,” Rahman wrote in a June 1 Twitter post.

“I had actually been wondering how something can be done really in the motorsports community just because nobody had really said anything yet,” Caruth said, adding that the outcome of the event exceeded expectations.

The two were able to get more than 100 entries for the race and wound up raising more than $1,200 for the George Floyd Memorial Fund along with additional funds for related causes such as the NAACP Legal Defense Fund.

“It wasn’t only to raise money, but to bring awareness and to hopefully have people from the motorsports community speak up and not ignore everything, you know,” said Caruth, who competed in the race as well.

“It was overall very fun to compete in, and it was cool to organize as well.”

Deemed an “ultimate global racing portal,” iRacing is an online racing simulation game that consists of a growing global community of global racers. Contestants in the race donated to the Floyd Memorial Fund and had paint schemes on their cars that paid tribute to victims of racial injustice, such as Floyd, Breonna Taylor, and Ahmaud Arbery.

“I feel like the people that competed in it felt like they were a part of something bigger than themselves,” said Caruth, an incoming freshman at Winston-Salem State University (N.C.) who will major in motorsports management. “That was very cool just to see them not so pressed about the result of the race, but why the race was happening.”

Caruth, a recent graduate of the School Without Walls in Northwest Washington, is a second-year member of the NASCAR Drive for Diversity program. He has finished top 10 in the Bojangles’ Summer Shootout race and will participate in the Summer Shootout again fairly soon along with the NASCAR Whelen All-American Series.

The race, broadcasted live by STN Racing on the evening of June 5, was action-packed and won by eSports driver Jake Nichols. Shortly after the event, Caruth extended his gratitude to participants and acknowledgments to his partners with a heartfelt tweet.

“HUGE congrats to @JakeNichols73 on the win! My race was one to forget, but the event is one to be remembered forever. Thank you to everyone that registered, donated, competed, and supported this event,” expressed Caruth, also a development driver for Richmond Raceway eSports with aspirations of entering the professional NASCAR ranks one day.

“It means a lot to people of color not only in the sim racing community but in the motorsports community as well, to see such love and support in these hurtful times. I want to give @MononInc (Monon Rahman) the biggest thank you of all. Thank you for calling me last weekend with this idea and allowing me to pitch in and spread it around.

“In addition, thank you to the broadcast team @STNRacing for broadcasting this event, and giving people a chance to watch it. Thank you to @steveluvender, @SimSeats, @RReSports, and every single person that aided this event’s completion. Thank you all. #BlackLivesMatter.”