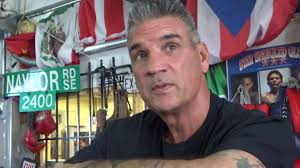 WASHINGTON – COVID-19 has shut down sports from middle school to the pro game. The major competitions are just beginning to put together schedule proposals for consideration between owners and the players.
Nothing has been decided as of this report for many leagues such as MLB, but those are team sports.

Individual sports, like boxing, have also been hit hard, no pun intended.
Several local, DMV gyms are ghost towns. All have been stopped in their tracks by this deadly virus.

Old School Gym run by Buddy Harrison in Prince George’s County may have been hit the hardest.

“My gym closed down,” Harrison said. “Several family members were laid off from their jobs. It’s been hard,” said Harrison, who trains his son Dusty an up and coming contender. “I have a roof over my head, and I am luckier than most.”

Harrison uses his gym for more than just getting boxers ready to fight.

“My gym is more of a shelter than a boxing gym. I have a lot of kids from broken families and foster homes, and they feel much safer in my gym than they do at home, so when it closed, I worry about them. I keep in touch with some of them.”

Championship trainer Barry Hunter runs the Headbangers Gym in Southwest, Washington, D.C. Hunter is well known as the trainer of the Peterson brothers, Lamont and Anthony.

“Covid has been disruptive,” We were supposed to fight on the MGM card on March 14. We got a call on the 12th that the card was canceled, and it has been downhill since then.”

“Our whole program is structured.” The typical day pre-virus was thrown off. “We now open the gym around 10 am and stay until 2 or 3, and then the kids would come in and stay to around 9 or 9:30. It was a big void. We had been doing it a certain way for many years.”

“We are following the Districts’ opening schedules. I think we are in phase one of the opening. Once we open, we are going to have the gym disinfected every day before and after the classes,” Hunter said.

We will limit the number of people in the gym to 10 and below.” Safety will be their top priority. “We will have hand sanitizers, and the fighters must have their own gear. We cannot have any sparring yet. We are following the CDC guidelines.”

The Russell family is in a different category.

“Our gym is a private gym. It is just like my own home. It is in PG County, but it is private”, says Gary Russell, Sr., who trains his sons Antonio, Antuanne, and current world champion, Gary Russell, Jr. “I am allowing my family to train. None of them have the virus, but we are not allowing the many others that use the gym to come in.”

Gary Sr. has left several messages with Al Heyman, the boxing promoter that schedules all the Russell brothers fights. “I don’t know why I have not heard from Al. He has my number. We are trying to find out what is going on with the future.”