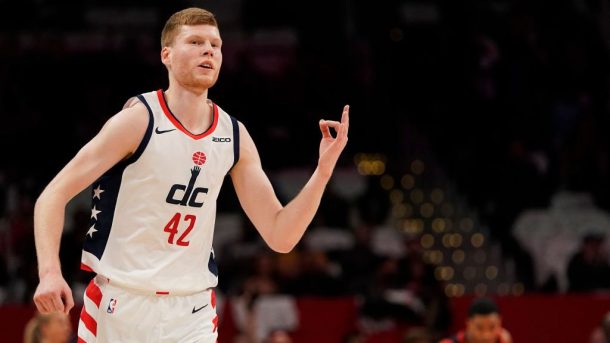 WASHINGTON – A substantial scoring threat and big domino for the Washington Wizards fell Monday after reports emerged saying that Davis Bertans will not be joining the team and restart of the NBA season in Orlando.

According to ESPN’s Adrian Wojnarowski and Tim Bontemps, the sharpshooting forward will be sitting out to focus on his looming free agency status.

Bertans had a career year after averaging a career-high 15.4 points per game. The mark ranked second on the team behind Bradly Beal (30.4). His 42.4% shooting from 3-point territory ties for seventh among the league’s top gunners.

Wojnarowski further reported that Bertans would be partaking in training camp before the Orlando bubble leaves. The Wizards were described as being in “full support” of the 27-year-old and making Bertans a top priority target this summer.

If the Wizards do not make the playoffs, Bertans could forfeit as much $604,752 in his salary. Washington has also been allowed to sign a substitute player to replace Bertans. That player would be signing a prorated minimum contract that will not count against the team’s cap sheet and will be unrestricted during the summer.

As stated on the health and safety memo sent out to the NBA Players Association, players have been given a June 24 deadline on whether or not they will withdraw from their teams for the remainder of the season.

An agreement was struck between the league and union that prohibits players from being punished with suspensions or fines by their teams for staying home.

Washington (24-50) enters the bubble 5.5 games back of the Orlando Magic for the No. 8 of the Eastern Conference playoffs. If they get to within four games of the Magic, they will play one final play-in game for the final spot and a chance to play against the potential No. 1 seed Milwaukee Bucks.