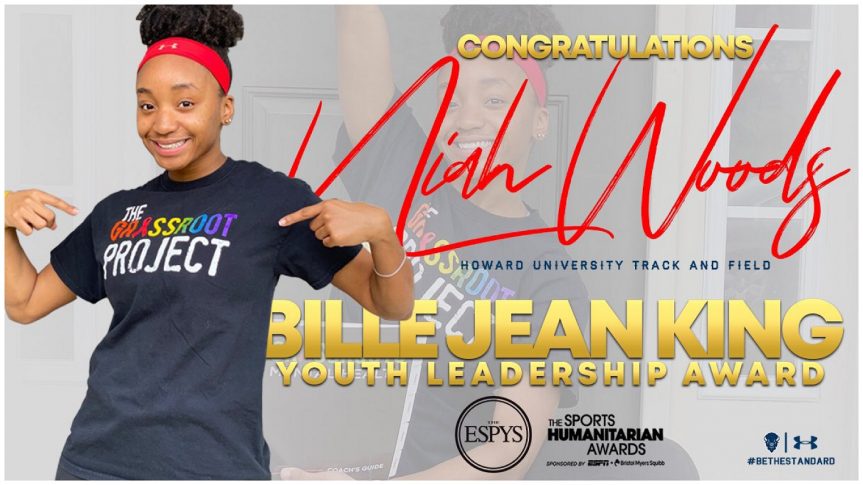 The Cincinnati native was one of seven winners acknowledged for their dedication in their respective communities.

Along with the other award winners, Woods will receive either a one-time $10,000 college scholarship or direct a grant to an eligible nonprofit aligned with their work. Among the other recipients is American University’s Elijah Murphy, the son of HU Hall of Famer Deborah Murphy from the women’s track & field program.

“I am extremely blessed and highly favored to receive this award,” said Woods. “Being recognized by someone who has had such a great impact in the world of sports is unbelievable.”

The Grassroot Project (TPG) capitalizes on the excitement, relatability, and popularity of sports to provide much-needed health literacy and social empowerment programs to D.C. teens. The program invests in leadership training, cultural competency, and professional skills.

“The Grassroot Project has impacted my life for the better,” Woods continued. “To be surrounded by a group of people who want to make an impact on people’s lives is truly incredible. This organization has helped shape what I desire to be in my future, it has also given me another reason to smile every day.”

Woods joins her Bison family and other student-athletes and teens in the D.C. area to make The District a healthier city. After one semester, she was named head volunteer.

“We are so proud of Niah,” said Howard Director of Athletics Kery Davis. “She exemplifies what it means to be a student-athlete in competition and academically while giving back to the community. She has a bright future ahead of her.”

Woods is a two-sport student-athlete at The Mecca, serving as a member of the women’s basketball team and women’s track & field team. The psychology major with a double minor in chemistry and sociology chose HU because of its HBCU culture. After graduation, she plans to be a psychiatrist and have her own practice firm.

“I am learning every day like the kids that I am teaching,” Woods concluded. “The work is truly outstanding, and I am grateful to be a part of it.”

Due to the coronavirus (COVID-19), the Sports Humanitarian Awards, normally separate from the ESPY Awards, were combined as part of one virtual celebration on the night.

The highly competitive nomination process for the Billie Jean King Youth Leadership Award selects and rewards young people for their leadership and commitment to improve their communities through sport. The selected nominees must: demonstrate how they are using the power of sport as a catalyst for change within their local school or community; be passionate and committed to empowering the community in which he/she/they live; deliver social impact showcasing how his/her/their community has been positively impacted; embody confidence and enthusiasm as a leader and have strong moral character; and personify exemplary leadership qualities on and off the field/court.

About the Grassroot Project

The Grassroot Project (TGP) is a 501(3)(c) non-profit organization that uses the power of sport to advance health equity for DC youth and their communities through NCAA athlete-driven health programs. These programs focus on topics surrounding sexual health, nutrition, and mental health in a three-year pipeline for middle school students facilitated by volunteers from American University, Georgetown University, Howard University, and George Washington University.