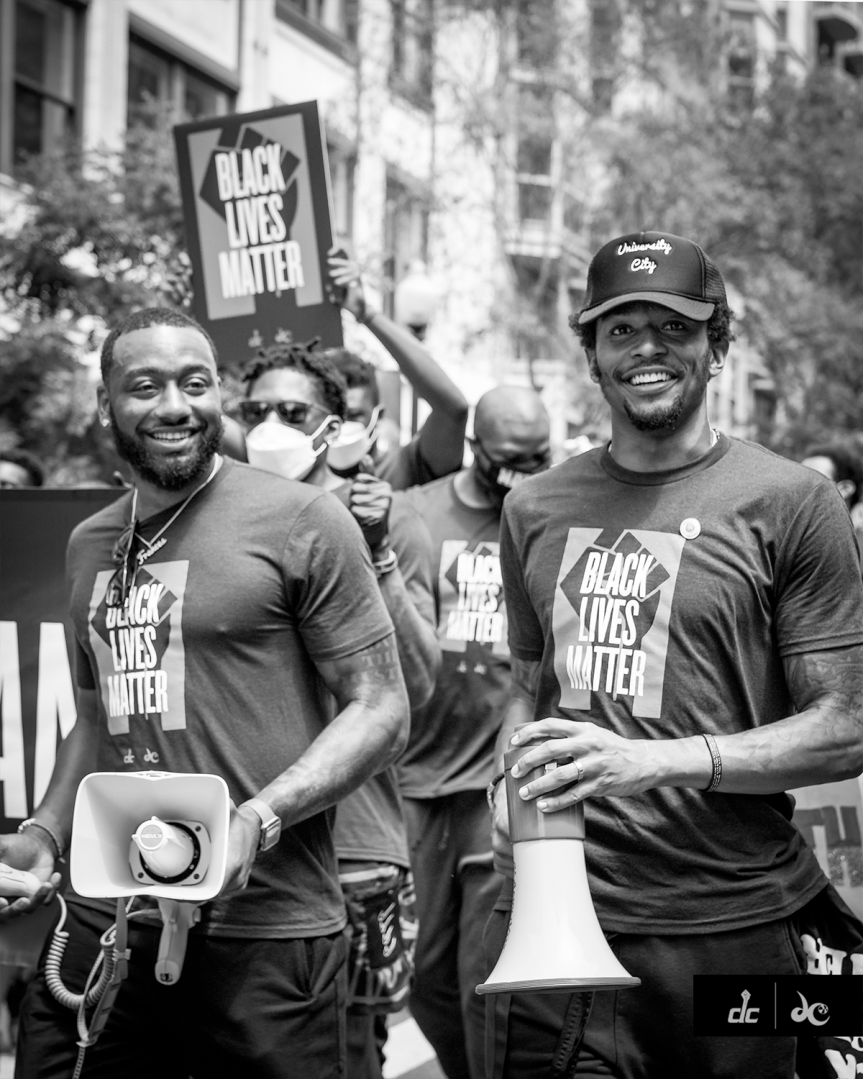 Washington Wizards and Washington Mystics stand up for equality

WASHINGTON – The Washington Mystics and Washington Wizards basketball teams banded together for a march that spanned two-miles in protest of racial injustice and police brutality and to celebrate Juneteenth.

Juneteenth commemorated the emancipation of the remaining enslaved Americans 155 years ago.

The march, organized by the Wizards guard Bradley Beal and the Mystics star Natasha Cloud, joined the group of protesters following the highly publicized deaths of multiple Black Americans, notably George Floyd, at the hands of police officers.

“Juneteenth is a day of celebration,” Cloud said. “It’s a day of liberation. It’s a day that we were finally freed from our bondage. We couldn’t think of a better day than today to come out here and come together, collectively, and unified in solidarity with one another for a greater cause.”

The march also followed up on sparked interest by Americans to learn about the history of Juneteenth.

On June 19, 1865, the last American slaves living in Texas were given their independence and freedom two years after signing the Emancipation Proclamation.

For Beal, not only is Juneteenth a day of celebration, but it’s a day to reflect on one’s actual freedoms.

“By definition, it is the ability to act and speak whenever you want, (about) whatever you want without any restraint,” Beal said. “Prejudices are normalized and condoned, where these things are taught and passed down generation to generation, encouraged and oftentimes celebrated? How does the black community grow when lives are taken from them without justice and without any consequences?”

Cloud said it’s vital for players on both teams to embrace the city during this moment. While Beal has been the face for the Wizards during the protests, leading his teammates posted a collective statement following Floyd’s death, Friday’s match was Cloud and the Mystics’ idea.

“She actually hit me up a couple of weeks ago, wanting to march, and I was all in,” Beal said. “We pitched it to the rest of our teams, and we all agreed that it was something that was going to be powerful and meaningful to us.”

Using her platform to speak up as an activist, Cloud recently penned an essay to The Players Tribune addressing systemic racism and calling for an end of the silence from all individuals, especially professional athletes. Cloud announced that she would not compete in the upcoming WNBA season to dedicate more time for social reform.

Before the march started, Cloud and Beal, wearing “Black Lives Matter” shirts, spoke about the movement and how meaningful and recent emotional protests made them feel. When asked about any past run-ins with police, both players flashed pained grins before speaking on past experiences.

Beal, the Wizards leading scorer, first recounted being profiled by police while driving with four basketball players in a predominantly white neighborhood. He then recalled being stopped on Interstate 495, the main highway that circles across the metropolitan region, with his fiance and a friend.

“It happened here, two years ago,” Beal said, “The officer asked me to step out of the vehicle, I’m literally on the side of the highway-the median of the highway on the side, and he comes up to me and says, ‘What if I f*** you up Monday and put you on a headline and arrest you right now?’”

The experience did not lead to an arrest but still affects Beal to this day, causing him to hang his hat below his eyes and change his voice tone. The star guard said he is aware that his tale is not an outlier and that it is time for Americans not to be ignorant about racism.

Following more than two weeks of protests, which included looting and peaceful gatherings in downtown Washington, D.C., it was their turn as athletes to join the cause. Some players spoke about their experiences dealing with police, while others said it was time to hold everybody accountable, including those who had yet to talk about the topic.

“Your neutrality is taking the side of the oppressor,” Cloud said. “With Black Lives Matter Plaza, you have to see it. You have to wake up to it every single day. You have to go by it every day. It’s a subtle reminder that we’re here, and we still matter. Our lives have always mattered, and until black lives matter, not all lives matter.”

Monumental Sports & Entertainment, the ownership group who controls the Wizards and Mystics, said it would continue building momentum from the march with several initiatives. It includes selecting two nonprofits each season, one dedicated to addressing police brutality and the other to voting, and organizing specialized programming with players and fans.

As he listened to his peers, read off a list of names who dealt with police brutality at the Martin Luther King Jr. Memorial, Beal said he felt that with the support of the people and his teammates, meaningful change is coming in the future.

“This march was just a stepping stone,” Beal said. “Now our real action and our real trials begin. Together we stand.”