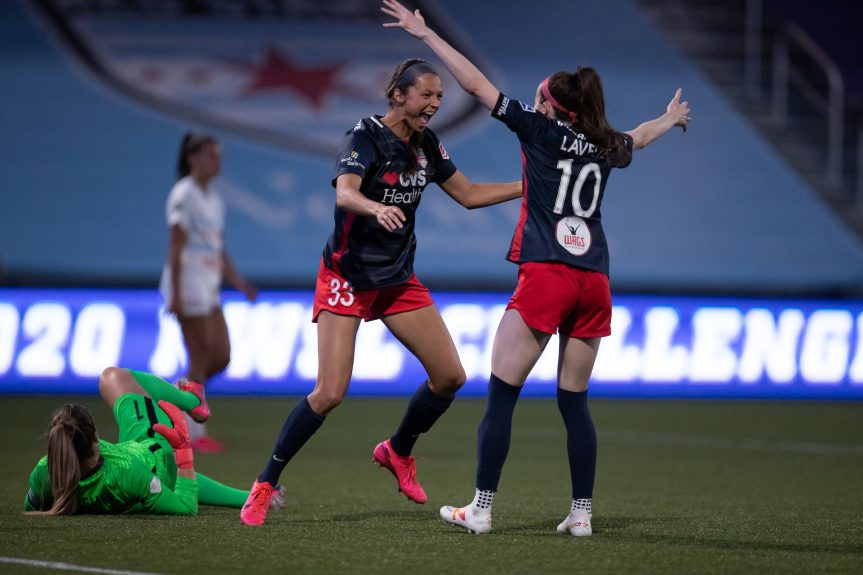 WASHINGTON – Goals by midfielder Rose Lavelle and striker Ashley Hatch led the Washington Spirit to a 2-1 victory over the Chicago Red Stars Saturday in their opening game in the National Women’s Soccer League’s Challenge Cup.

Under the new tournament format in Utah, a “recalibrated” Washington Spirit looks to continue the upward trajectory it ended the 2019 season. It only took seven minutes into the contest before Lavelle, a U.S. Women’s National Team starter, crushed a loose rebound into the top left corner of the net to give the Spirit a one-goal lead.

Twenty seconds into the second half, Hatch, who led the team in scoring last season, pounced on an extra touch by Chicago goalkeeper Alyssa Naeher to steal the loose ball and score in the open net.

“We have players that can provide magical moments at any time during the game, and they are chopping at the bit to play,” Head Coach Richie Burke said Thursday.

Ashely Sanchez, the No. 4 pick of the 2020 NWSL College Draft and a U.S. Women’s National Team prospect, excelled in her first start in a Spirit uniform. The former UCLA striker joined Lavelle and Hatch in multiple attacks as Washington finished with six of its 10 shots on target.

“That kid is an incredibly talented kid,” Burke said. “Our job is to keep her moving forward because she is a prestigious talent…She is small and slight but tricky and fast. She is going to take her lumps at this level, but she is a very talented kid. She is someone you’re going to enjoy watching because she will run at you and take you on.”

Midfielder Kumi Yokoyama, one of the Spirit’s five new international players, struggled to adjust the play’s speed by both teams. Burke said he expects her to add more flair in the attack once she adjusts to his press-based offense and the league’s pace of play.

Despite Chicago midfielder Morgan Gautrat’s goal in the 51st minute, the Spirit remained in control of the contest. A last-ditch effort by Chicago’s striker Bianca St. Georges in the Spirit’s six-yard box was denied by goalkeeper Aubrey Bledsoe’s one-handed save to secure the win for Washington.

Before the contest, Burke said this year’s squad is ready to exceed expectations after an eventful offseason. The Spirit began training in Florida in March before being called back home due to the coronavirus pandemic. Washington returned to training in May in Virginia because they had no access to their practice facilities at the Maryland SoccerPlex.

The lack of preseason friendlies meant for the Spirit did not test possible starting lineups outside of practice or acquire intel on their future opponents. Without the usual warm-up games, the team’s endurance was quickly tested against Chicago, with Washington using three of its five substitutions before the 70th minute.

Washington has three more games remaining before the knockout round, two of which are with playoff teams from last season. For Burke, the rest of the Challenge Cup will be like its namesake, challenging but believes the Spirit are up for the task.

“We have had to recalibrate at every single turn,” Burke said. “This is another opportunity to do so, but I believe in the players, and I believe that we have a talented squad.”

The Spirit will face the reigning NWSL Champion North Carolina Courage on Wednesday at 10 p.m., with the game broadcast live on CBS All-Access.

During Saturday’s match, the club unveiled its 2020 new home kit. The navy blue jersey features grey horizontal stripes and paired with red shorts. CVS Health, the team’s latest sponsor, is prominently displayed in the front of the new jersey.

Sandy Spring, the team’s first-ever official banking partner, will on the jersey sleeve. On the back of the jersey, Progressive Insurance will be featured on the yoke while founding sponsor, the Women and Girls in Soccer (WAGS) returns to occupy the space beneath the players’ numbers.